Although the vote to kill the Jarvis bike lanes got most of the attention earlier this year, they weren't the only ones to get the axe. The Urban Repair Squad reminded us yesterday of the alteration of the bike lane at Dupont and Lansdowne, and today we share the scene at Pharmacy Avenue, where the City has commenced work on the complete removal of its cycling infrastructure.

It's not surprising that the loss of a bike lane in Scarborough would garner less outrage than that of a major downtown thoroughfare, but for cycling activists the trend toward lane removal is worrisome, no matter where it is. Interestingly, for those unfamiliar with the Pharmacy lane, it was one of the more useful north/south corridors for cyclists in the east end, extending from just north of the Danforth up to around Eglinton Avenue East. Opponents of the lanes always argued that few people used them and that the loss of the curb lane for vehicular use snarled traffic in the area, but a campaign to stop removal plans earlier this year, took issue with both of these statements. Needless to say, their counter-argument fell on deaf ears. 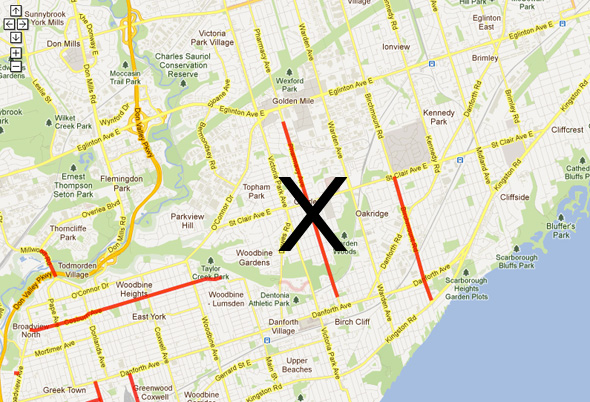