On the heels of City Manager's Joe Pennachetti's report outlining numerous cuts and cutbacks to Toronto services, the TTC is ready to reveal its own cheery news that it's considering a 10 cent fare hike, reductions in service-frequency, and slashing almost 500 jobs via a combination of employee buyouts and attrition. With a capital budget that's projected to be $1.5 billion in the hole over a 10-year period, the Commission is also under pressure from Mayor Rob Ford to reduce its 2012 operating budget by 10 per cent.

A number of the proposed service cuts will directly result in delays and inconveniences for passengers. Along with longer waits and the promise of overcrowded buses, cuts to Wheel Trans service have also been proposed. A potential new regulation would render dialysis patients ineligible to use the service (on account of their lack of need for a mobility device), a move that would save approximately $5 million but seriously impact the lives of those who've previously relied on the service.

According to a draft of a budgetary report obtained by the Toronto Star, here are some of the other proposals on the table:

According to TTC Spokesperson Brad Ross, the budget reports in question, which will be considered at a special meeting on Friday, will be made available later this afternoon. No cuts to Blue Night bus service are proposed as part of these cost-saving measures.

The TTC has released PDF versions of its shortfall reduction plans (capital budget and Wheel Trans). Here's a chart that summarizes some of what's being proposed. 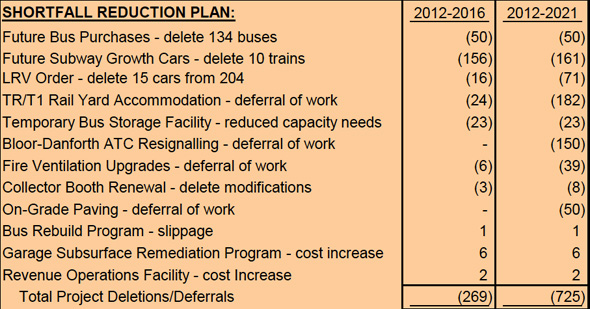 Photo by Daniel N in the blogTO Flickr pool