Can we mend the downtown/suburban divide?

The Ethnic Aisle, a blog that muses on GTA issues through the prism of ethnicity, hosted its first ever live event Monday night, facilitating chit chat about Toronto's nuanced suburban/urban divide. Held at the 519 Community Centre, roughly 40 citizens of various stripes showed up for the meeting, which was essentially a giant, friendly, free flowing conversation.

Business conference style adhesive name tags identified participants by both name and neighbourhood of residence, providing a built-in ice breaker when introducing yourself to strangers. The night began with a brief introduction from Nav Alang, a co-founder of the Ethnic Aisle blog and tech writer for the Toronto Standard. 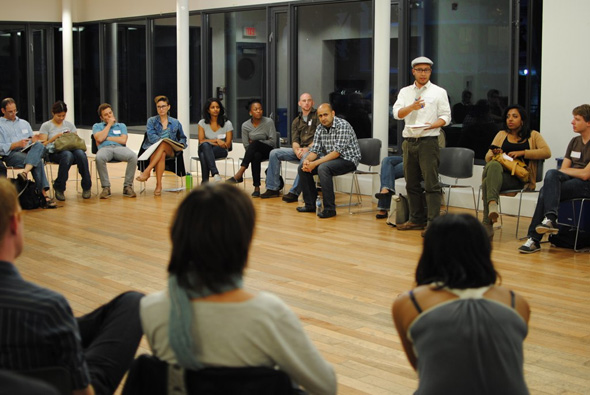 Soon after, participants were broken into small groups, each tasked with discussing a topic related to the schism between downtown and uptown existence: transportation, economics, culture and the Canadian dream. This format allowed a chance for everyone to get a word in, and the exercise (which felt a bit like a university workshop) helped encourage discourse and an atmosphere to explore how ethnicity inflects urban issues.

Some of the more salient points brought up in the group discussion included exploring the suburban narrative and how it aligns (or fails to) with immigrants and other minorities; the role of public transit; what culture means and whether it exists in the suburbs; how (if?) economics, class and ethnicity are intertwined, and more. 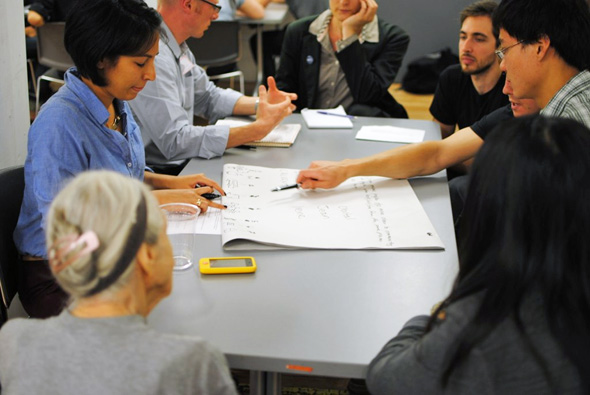 The groups reconvened after about half an hour and presented their conversation points to the rest of the gathering. Unlike school seminars, there weren't really any prescribed lessons to learn here per se. This was more about fostering creative and critical thinking via an exploration the topic more than anything else An open discussion followed that was cut short only by time limitations.

As the group dispersed into the evening, the conversations probably resulted in more questions than participants had at the outset of the night â which really, was kind of the point. The event was a forum for insightful ideas to get the ball rolling on a discussion that, often, seems underrepresented when examining municipal issues.

To learn more about it all, visit ethnicaisle.ca