Get to know a street: Denison Street

Denison Street is one of those streets with little personality or flair. Unlike some of the other neighbourhoods featured in this series, Denison doesn't have an overwhelming sense of community or a charming aesthetic. It's a drab, industrial looking street in Markham, and it looks it--no question. But where the superficial culture-seeker may strike out, the savvy shopper will almost certainly find exactly what he or she needs, especially if in pursuit of a hobby.

Denison's many specialty stores between Woodbine and just past Warden cater to musicians, golfers, runners and more, with several places to indulge and take a break after putting in a good few hours of practice. Just don't count on kicking back and enjoying the scenery. Here are a few places to check out on and around Denison Street in Markham. 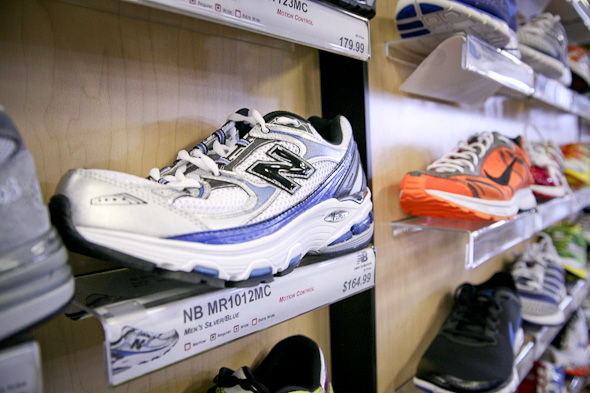 Running Free
Running Free strikes me as Running Room's kid sister, if only because it doesn't boast countless locations throughout the country. With just five stores including this one in Markham, Running Free was certainly borne from the same mother, though, with focus on activity and physical fitness. The store has walls of running shoes from brands such as Brooks, Salomon, and Mizuno, men's and women's activewear and accessories, as well as books and magazines on fitness and healthy living. The large plastic bin by the front door also collects gently used shoes to be distributed to those in need.

Tiny Tom Donuts
And now from running to delicious, delicious donuts. Tiny Tom Donuts is a CNE favourite of mine, but never before have I encountered the deep-fried magic off Exhibition grounds. But here at Denison and Woodbine they're made just the same, sold by the dozen ($3.50) on in packs of eight ($2.50). The shop is cash-only, and the production is mesmerizing. 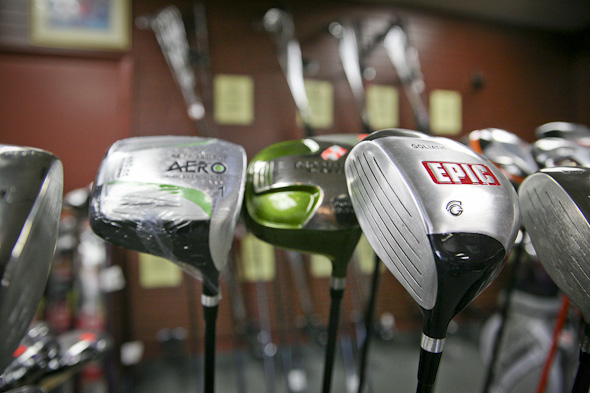 Golf Clearance Warehouse
Golf is not my thing, and I imagine it's pretty evident. So the store clerk and I exchange a futile glance, and I begin explore the shop anyhow. The space is filled with clubs, clothing, and accessories at marked-down prices, bought through overruns, closeouts, and other circumstances that result in great deals for the customer. A complete set of Lynx clubs on sale for $399.99, down from $699.99, is good, yes? 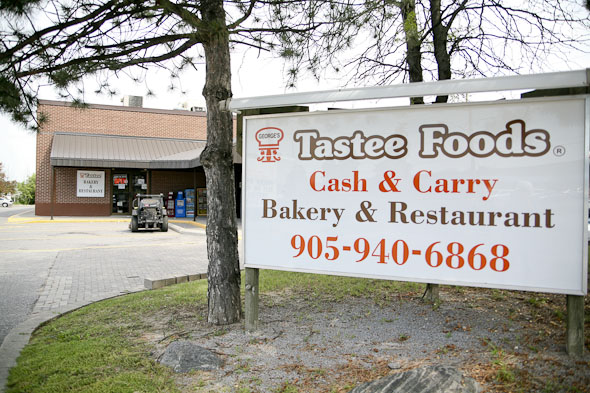 George's Tastee Bakery & Deli
Ah, now little dive diners I know more about. Covered with cartoon caricatures of children eating beef patties, Tastee's looks very much like the inside of a Coffee Time, though it actually bakes from scratch on the premises and offers more than coffee and sweets. Along with its wall of breads starting at $1.75 a loaf, Tastee's makes it own beef patties (hence the cartoons) and other hot meals including its jerk chicken dinner ($6.99), which is particularly revered. 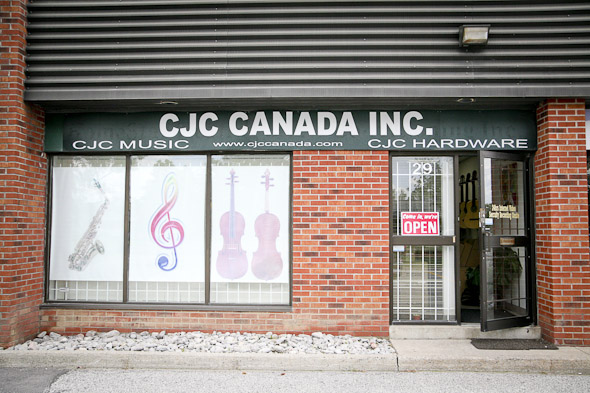 CJC Music
CJC Music is a tiny strip mall shop with lots of musical offerings, if not totally apparent when first walking in the store. There are hanging rows of acoustic and electric guitars, plus a lone drum set sitting in the middle of the space, but there's certainly a lot more available behind the scenes. CJC specializes in violins, which I later notice are proudly displayed behind the counter, offering both electric and traditional instruments in sizes for both kids and adults. 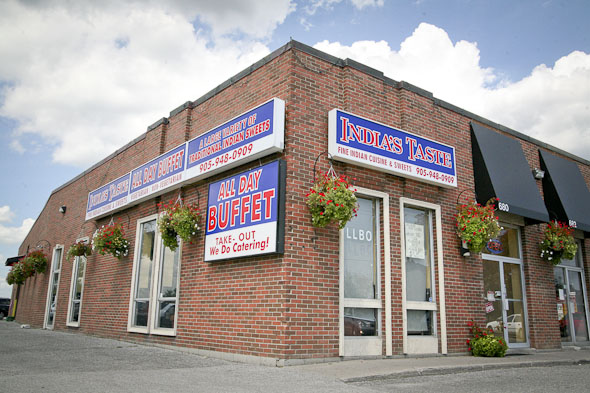 India's Taste
India's Taste is a sprawling Indian restaurant with an all-day buffet and main dishes a la carte. Though its interior colours remind me a little of Swiss Chalet, the chicken here is Tandoori--not rotisserie--and is served alongside fresh naan, roti, and more. With the buffet in the back and tables and booths throughout the space, the front of the restaurant is reserved for the restaurant's sweets including Jalebi, Gulab Jamun, and Rasgulla. 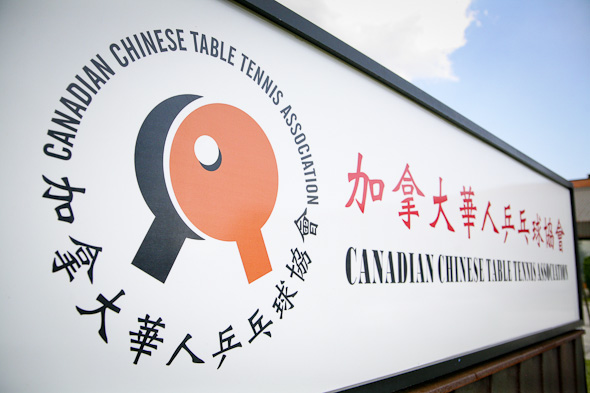 Canadian Chinese Table Tennis Association
This 15,000 square foot facility is for serious ping-pong players. Or else, for anyone off the street with $6 for a Day Pass. The CCTTA Sport Centre has 35 tournament tables and a retractable spectator stand, as well as coaches and trainers to help you get your backhand tournament-ready. The facility also offers summer camps for kids and is open every day from 9:30 a.m. to 10:30 p.m. 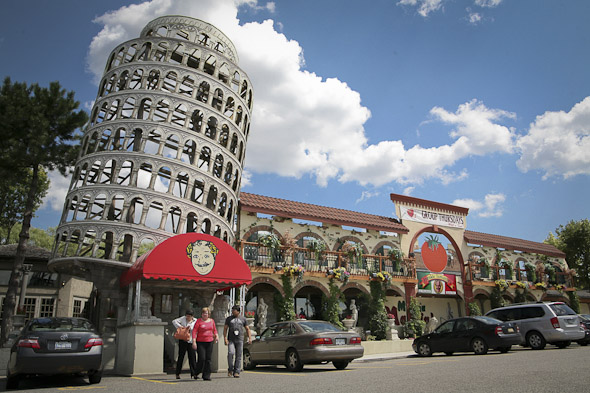 Frankie Tomatto
Though a block of so south of Denison, you can probably see Frankie Tomatto's pseudo Leaning Tower of Pisa from wherever you are in the area. The restaurant is Italian (no surprise there) and offers an "All You Can Eat Italian Feast" of 14 different food stations. Though it may seem a little tacky, the inside is pretty cool and resembles an Italian marketplace, complete with signs, lampposts, and the odd lone barrel.