Doug Ford isn't a fan of Waterfront Toronto. Calling this municipal, provincial, and federal agency "the biggest boondoggle" ever achieved by the three levels of government, he would rather see the private sector redevelop the area, independent of public resources.

Does he have a point?

Despite the obvious success of recent projects like Sugar Beach and Sherbourne Common Park, a great deal of public spending has been devoted to this revitalization plan. Despite only a portion of the 25-year project being complete, Waterfront Toronto spent $750 Million between 2001 and March 2010.

Is it possible to achieve vibrant, mixed-use development on the waterfront, without the massive public investment?

The transformation of King West in the mid 1990s from an underutilized manufacturing hub to a highly populated, mixed-use community might shed some light on this question. In 1996, the city temporarily rezoned the area for residential use, and after some successful sales of condo units, the change became permanent. 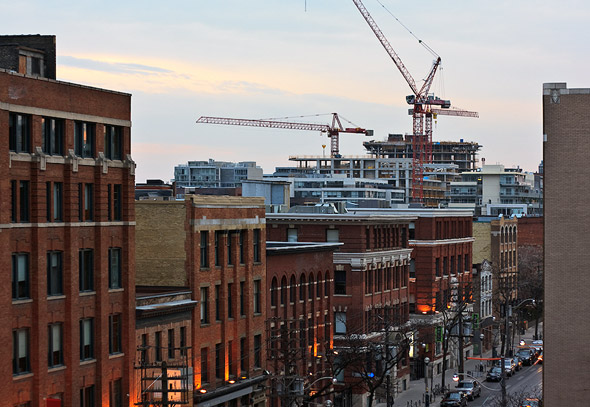 Since then, the area has seen its population quadruple, and it has turned into a bustling and prosperous community. Condo units now sell for about $700 per square foot, up from $100 in 1996. No major public investment was required for this transformation.

The evolution of King West might prove a model for development of our waterfront.

What made the area attractive to developers? As a New York Time article notes, its industrial character and proximity to downtown were the main factors. The waterfront shares similar characteristics.

Is it reasonable to expect the same type of private investment for the waterfront revitalization, without the help of public funding?

Jack Diamond, the architect known for designing the Four Seasons Centre for the Performing Arts in Toronto, recently argued in the Globe and Mail that it isn't. The scope of the project is simply too great. And that's not to mention that ensuring that public can enjoy the lakefront should remain a priority as the area is transformed.

Without Waterfront Toronto, we probably will never achieve the vibrant atmosphere on the waterfront that we want. At a smaller scale, however, the organic revitalization of King West shows us that it is possible to transform underutilized industrial land into a vibrant, mixed-use community, without significant public investment.

Writing by Jeremy Korn. Lead photo of King West in the 1980s from the Toronto Archives, second image by greyvdm in the blogTO Flickr pool.