Those walking along Queen Street West over the last couple weeks might have noticed that there's something different about the stretch of the street just west of Spadina. The Cameron House's iconic south wall, which featured a mural by Canadian artist John Abrams, is no more. No, the City didn't mistakenly order the Cameron House to paint the wall white thinking it was graffiti, but it did play a somewhat inadvertent role in the eventual decision to scrap the mural.

Having noticed the absence of the mural, I got in touch with part-owner Cosmo Ferraro to find out what had happened. "Renovations started because of a work order from the city of Toronto," he explained. "They said the building was in disrepair and we needed to do a major overhaul. In the process of making all the necessary changes, the murals on both the side and front of the building were damaged."

I suppose, given the age of the building â it's more than 90 years old â and what the facade had come to look like in recent years, it shouldn't come as a much of surprise that the murals were compromised during the renovation effort. But there is good news. The Cameron House's ownership has decided to commission two new murals for the building. 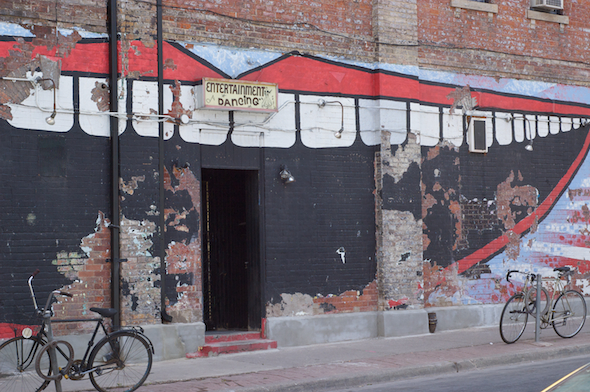 The south wall will be once again painted by John Abrams, who's planning to put up an entirely new composition. John Marriot, who painted the smiling face on the east wall, was asked to paint a new mural as well, but he declined the invitation. As such, the Cameron House is currently looking for an artist to take on that task, but has yet to make a decision on the matter.

It's unfortunate to see the murals go, but it seems that the Cameron House has made the best of a potentially bad situation. Moreover, the venue is celebrating its 30th year of operation this October, "The thirtieth anniversary is very exciting and we are looking forward to it. We have some things in mind that we want to pull off by October," Ferraro says of the work they're doing on the venue. And for those worried that the renovations might change the unique look and feel of the the Queen West institution, he assures me that none of what they're doing will "change the feel" of the place.

To see the what the murals looked like pre-renovation, check out the slideshow below.