The TTC unveiled its new customer service kiosks last week at several busy downtown stations. The idea behind the summer student-staffed portable kiosks was to create a friendlier TTC (but really, how can you improve on 'perfect?') and provide assistance to customers and tourists looking for general transit information and directions.

Although early in the program, I decided to go incognito (read: brush my hair) and test out the new "kiosks" to see how they would measure up. I stopped at Union Station first, where I found two high school-aged girls in blue caps and t-shirts standing next to a route map display. The "kiosk," which was really more of a sign, wasn't terribly conspicuous, and if it weren't for the girls' t-shirts labeled with "Information" across the back, I might have missed the purpose (see the lead photo for what I'm talking about).

"Can you tell me how to get to the Distillery District?" I asked the girls. I could tell by their faces they didn't know off hand, but they seemed eager to help me get where I was going. "Let me see," one said, opening a map from her stash. "Where's the nearest intersection... oh here!" she said, finding it on the map. The other girl moved closer as we all huddled over the paper. "I want to see too," she said.

"It looks like this one, the 72 A or B," the first girl said. "You know what, I'll go and check for you, if you don't mind waiting." I told her to go ahead as she consulted with a collector. Having experienced my fair share of snark from TTC collectors over the years, I was more than willing to step back and let someone else do the dirty work. She returned a moment later and confirmed the route. "Yup," she said. "Just go up those stairs and there's a stop right up there." I thanked the girls and headed up the stairs, walked past the bus stop, and entered the Queen Street station where I found my next victim. 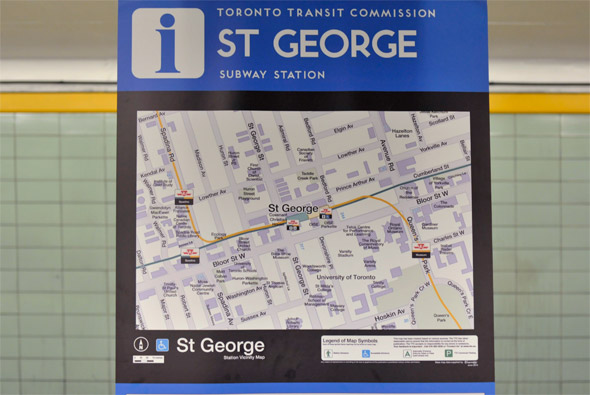 I decided to lob one this time. "Can you tell me when the last train leaves northbound from this station?" The guy here was alone, and seemed just a little bit nervous. "Sure," he said, fumbling with the map. "Um, the last train leaves Union at 1:43 a.m; it might be here by, say, 1:46. But the Yonge bus runs all night." Then I pushed it a little bit. "By the way, do you know of any good cafes around here?" Nada. But it was worth a try.

For my last test, I headed to another station and asked the ambassador standing alone if he could tell me about the late evening station closures between Eglinton and Finch. "I think it closes a little after midnight," he said. "But there should be buses running. Here, I have a number you can call to find out more about the schedule." He rifled through his bag (which was packed with TTC information documents) and handed me a card. I thanked him and let the man behind me ask his question.

While it took a moment or two to get answers at each stop, I would attribute it mostly to first day kinks. As the "station ambassadors" become more comfortable in their roles and start hearing the same questions repeatedly, I'm sure they'll be able to rattle off details from the top of their heads. But even now, they all came off as eager and friendly, which is a nice change to see on TTC platforms.