Soon you'll be able to walk atop the CN Tower

Announced earlier today, Edgewalk, the newest attraction at the CN Tower will allow participants to walk around the ledge of the tower's main pod, over 350 metres in the air. Moving "hands-free" in small groups, those brave enough to try it out will be able to circle the tower while secured to an overhead safety rail that uses a trolley and harness system to keep you from, well, falling to your death. It sounds a bit gimmicky, sure, but short of pulling a Dar Robinson, it'd be tough to beat the adrenaline rush of leaning over the pod and looking down at a 116-storey drop.

According to the press release, Edgewalk is the first attraction of its kind in North American, which I guess makes sense because we have the tallest tower in North America! "We think it's fitting that Toronto's newest attraction in 18 years should be at the city's most defining landmark," said Mark Laroche, President and CEO, Canada Lands Company, Owner and Operator of the CN Tower. "EdgeWalk is both thrilling and unique and will push visitors to their limits - literally and figuratively. This will be among Toronto's, if not the world's, greatest attractions."

Well, let's not go too far. But if you're into heights or commercially organized heroics, this will likely satisfy your desire to boast about how daring you are. Set to open later this summer, there's no official word on ticket prices yet (though reports are it'll cost $175), but at 20-30 minutes of pod-walking, it'll necessarily be pretty steep. What do you think? Is this the next must-try attraction? 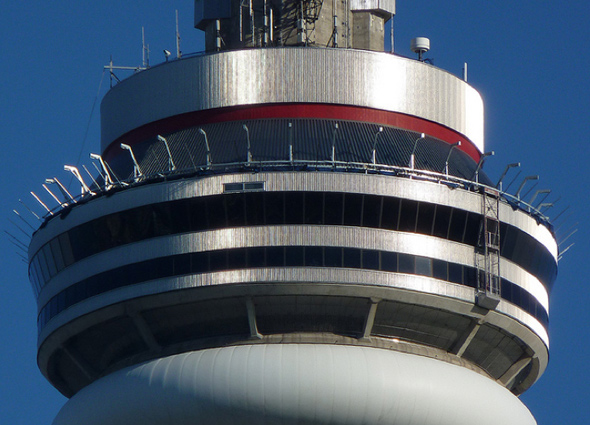 IdealistDreamer in the blogTO Flickr pool)
And if you want to get a better idea of how all this works and what all the rules and regulations will be, the website for the Auckland Skywalk should serve as a useful primer. In fact, according to the Star, a Edgewalk employee said that the "tour guides are being sent for training to New Zealand" where this similar (if not quite so high) attraction is already in place.

Some highlights from Skywalk's FAQ: