Are you ready for the Rapture, Toronto?

It's the end of the world as we know it, and I feel fine. Maybe that's because I don't actually believe all this hoopla surrounding the supposedly upcoming Rapture on Saturday — for those that haven't heard, Harold Camping, the founder of Family Radio is predicting the apocalypse will begin at precisely 6 p.m. on May 21, a.k.a. Judgement Day with a wave of earthquakes. Six months later, those of us left behind will be worm food.

Camping (and Family Radio) certainly are spending a lot of money promoting this theory — I first noticed ads in the TTC warning about Judgement Day pop up a couple weeks before Easter, and soon after I started to notice billboards scattered across the city as well.

"THE BIBLE GUARANTEES IT!" the posters scream, but just so we're clear, Camping also predicted the world would end in 1994 and last time I checked, we're still here. (I read somewhere he chalks it up to a math error, but swears he has it right this time).

Right or wrong, as this year's predicted doomsday draws near, the Internet is on fire with commentary — mostly sarcastic, some serious — and Toronto is no exception.

Let's take a look at some of what's out there.

If you're worried about the upcoming Rapture, have no fear — Craigslist has got you covered. Have a pet that might be left behind? Well, there's more than one friendly Torontonian whose offering to take care of all furry friends in the event their owners join their maker on Saturday, for a small, pre-paid fee, of course. 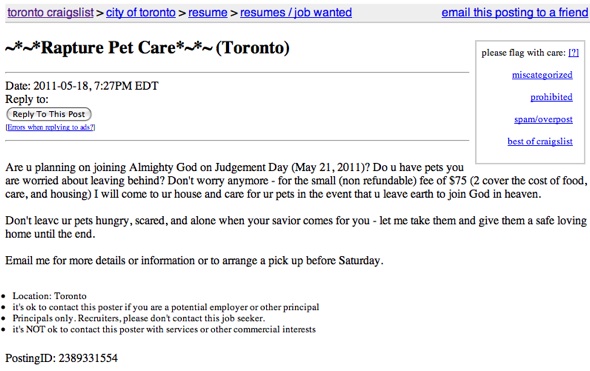 There's also a few people who are true saints — these folk are willing to take all your worldly possessions off your hands for free! 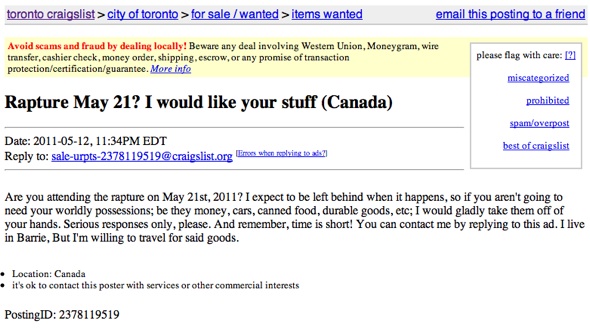 One man has even turned to Craigslist looking for a last-minute, last-ever hookup. 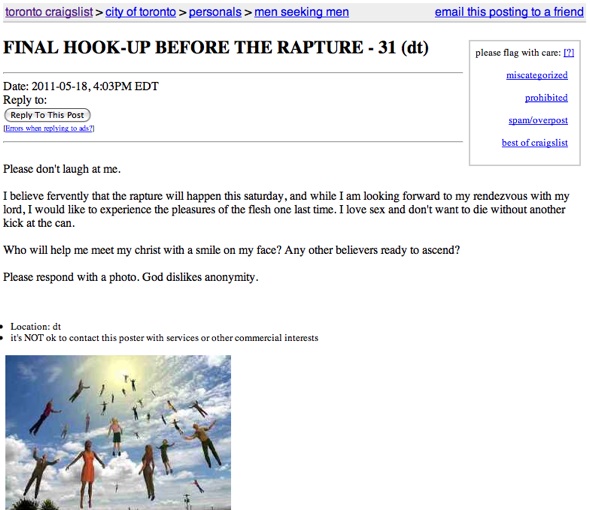 And of course, what would an apocalypse be without a post-apocalyptic party? Rapture parties are springing up around the globe — so we turned to Twitter to find out what kind of plans Toronto has for the big day.

So, since today is slated to be the last night on Earth - before we either ascend to heaven or are damned for all eternity - how are you planning on spending it?