Why the Cycling Advisory Committee should be saved

If you don't know what to ask for, you're never going to get what you want.

Before I became a member of of a city advisory committee, I knew what I wanted as a cyclist, but I had no idea how to ask for it at City Hall. Biking around yelling at motorists parked in the bike lane wasn't working.

I'm a big proponent of making demands of our elected officials, holding them and the staff that report to them to task; of complaining when things aren't right, and, yes, of bicycle lanes. And I sit on the soon-to-be-axed Toronto Cycling Advisory Committee, one of many on the chopping block.

Hello: My name is Tammy Thorne and my city has a democracy problem.

Active engagement of citizens is the hallmark of any great city, and many of our greatest neighbourhoods within the city of Toronto. I had to apply for the position of committee member - as I would have for any job - and was interviewed by a large all-male panel made up of staff, councillors and former committee members. I was told I was not allowed to use my notes when the questioning began. At the end of the awkward experience, I felt I had done poorly, so as I was leaving the room I said: "I just want to say, even if you don't choose me for the committee, I'll still be watching the city's every move on bikes and counting the kilometres [of bike lanes]."

At the time I was blogging for Spacing and it was not an idle 'threat.' Since then I've gone on to become even more engaged in attempts to make our great city even better. But, if I had not been chosen for the committee, my level of engagement would have been greatly diminished and the reams of information I've been able to share with community members would never have been typed and transmitted.

Along with fostering democratic engagement, the Cycling Advisory Committee serves a variety of functions. Generally, it's the best venue for regular folks to find out - and provide input to - the bike projects happening (or that could happen) in their neighbourhoods. It's also the place where cycling committee members can put motions forward suggesting new or improved infrastructure and policy to the Public Works and Infrastructure standing committee, which is then forwarded on to Council for final approval.

On a personal level, it's where I met the ever helpful bike riding police officer Hugh Smith, the Globe and Mail reporter who helped make the case for maintaining recreational trails in winter, and it's where I met local advocates who worked tirelessly to get a safer Bloor viaduct crossing for cyclists, and many others working to make the city better.

At the end of the day, the committee is made up of individuals, and being an individual member of the committee has afforded me a more official venue to help with other community initiatives and to work with BIAs, resident associations, and other advocacy groups like the Toronto Cyclists Union, 8-80 Cities and the Bicycle Trade Association of Canada.

Since the impending committee cuts were announced, it has been pointed out that some of the committees were dysfunctional. There were some nights when I felt the same thing - but I don't belief the dysfunction was due to the volunteers and citizens there to make change. We were there to provide expertise and input on our own time, at our own expense, to help make our communities a better place, and to make sure that City Staff were actually following through on infrastructure and policy recommendations in a timely manner. 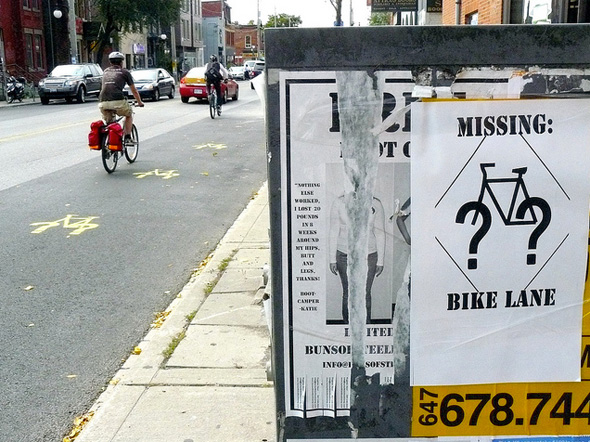 Still, we were able to achieve some things in committee that a singular citizen alone would have a hard time getting traction on. With the help of the Toronto Coalition for Active Transportation, we were able to have the dangerous extra set of bollards in front of the Boulevard Club on the Martin Goodman Trail removed. As mentioned above, the City is now removing snow from a portion of the lakeside trail as a result of work done in (and out) of committee. City staff also produced a State of Good Repair report for the Bikeway Network, which the committee should be allowed to follow up on.

If the committee were no longer to exist, it would make my goal of pushing for more and better year-round maintenance of all our off-road trails much more difficult. (I've got my sights set on the Don Valley trail network now - and the crosshairs aimed directly at the Mayor's office.) Indeed, many of our "victories" were the result of hard work done by other research and advocacy groups (like TCAT) beforehand.

The committee's function in these cases is to make sure that those initiatives get to council. First, motions related to bicycle infrastructure, or policy, go to the Public Works and Infrastructure Committee. This standing committee is now chaired by Ford minion, Denzil Minnan-Wong, a non-cyclist who has been known to liberally use the phrase "war on the car" (see our interview with him in the upcoming May issue of dandyhorse).

Is the current Cycling Advisory Committee dysfunctional? At times. Dormant? I don't think so. Yet this is the main "reason" given for the proposed cancellation of these many citizen committees. As the new administration cuts costs in any way it deems "reasonable," it's very hard to see how eliminating citizen involvement meets their mandate. Eliminating these committees will further isolate City Hall from the citizens it is supposed to represent and respect.

Advisory committees provide an avenue for regular folks to get issues to council that are important to them, but might not be at the top of the political agenda. As a committee member I can work with staff over an extended period of time to help track projects and ensure that plans are actually implemented. Indeed, access to staff is the biggest boon of being a committee member to my mind. While some (including me) might say that keeping councillors and staff honest is our bane.

I've been working with, and as a volunteer for many years now, and I have to say it's bad business to turn away good people willing to work for you for free. It's neither respectful nor cost-effective.

So my promise to the powers that be is still the same as the day I walked out of that Cycling Committee interview room: I'll be watching you. But the really important question is will you?

Active citizenship is one of Toronto's best qualities so it makes sense to harness this resource, not put it out to pasture.

Tammy Thorne is the editor-in-chief of dandyhorse magazine, Toronto on two wheels. She is also an untethered committee member.

The Executive Committee meets tomorrow, April 20, 2011 at 9:30 a.m. (City Hall, Committee Room 1). To make a deputation at Executive Committee, contact Frances Pritchard of the City Clerk's office to register. She can be reached at 416-392-6627 or exc@toronto.ca.