A note on Reddit accusing local bike shop Cycle Solutions of trying to deter parts suppliers from doing business with Charlie's FreeWheels, a soon-to-launch charity bike store in Regent Park, resulted in a fast and furious backlash from the online community today. Submitted to the online forum early this morning, the post, which was made under the username pain_perdu, makes the following claims:

"A big retailer named Cycle Solutions has written letters to all the major bike and parts suppliers to threaten them into refusing to do business with my charity, Charlie's FreeWheels....We were hoping to launch our shop in downtown Toronto in mid-April but major suppliers like Norco and Kryptonite [refuse] to work with us because Cycle Solutions has told them not to. In addition to making bikes, Norco makes the majority of the parts we need and so without access to new parts we're unable to operate."

The story of alleged bullying struck a chord and eventually made Reddit's top stories section, where it has racked up over 400 comments, the majority of which offer support and advice for what sounds like a wrongly targeted charity. Even blogTO's editorial email account was flooded with concerned citizens hoping to bring attention to the questionable-sounding behaviour on the part of a local retailer. Despite this torrent of outrage, however, the owner of Charlie's Freewheels, Derek Chadbourne, claims that the accusations in question are false and, moreover, that Cycle Solutions has done nothing wrong.

"The person who wrote the note had no authority to do that, and is no longer affiliated with us," Chadbourne told me in a phone conversation earlier this afternoon. "There is no truth to any of this, and we just feel horrible about it. We want people to know that nothing like this happened."

Upon hearing about the thread, the Charlie's FreeWheels team formulated a response discrediting the initial post on Reddit, but unfortunately it's currently lost near the bottom of a sea of comments. "We regret that these false statements were made in a public forum, and that the owners of Cycle Solutions have been spoken ill of without reason or justification," it reads.

For their part, Cycle Solutions have taken the situation in stride. When contacted earlier today, co-owner Roger Martins calmly denied the claims and said that he and his partners would be gathering evidence from their suppliers to prove that the accusations are baseless. They plan on posting these documents publicly to ensure that the store's reputation is not negatively affected by today's storm of attention, which included hateful emails and even a few death threats. I'll update this article when these become available. They've also contacted Reddit moderators about the libelous post that started all of this.

After the initial barrage of comments about what an awful situation the post describes and what terrible people the owners of Cycle Solutions must be, finally a few people bring up what should be obvious â what if the claims are false or exaggerated? One forum member in particular sums it up perfectly. Addressing the other members, he offers what should be a pretty common sense bit of advice: "[You] need to stop jumping to conclusions. Your actions were completely uncalled for and could damage a businesses [sic] reputation that potentially doesn't deserve it. Is it that difficult to wait until we actually have some proof as to what's really going on?" 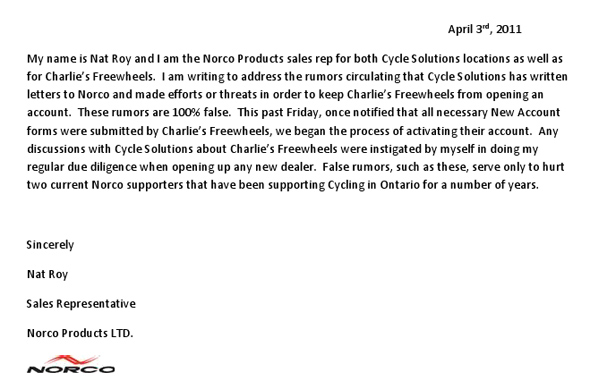 Right around the time that Norco rep Nat Roy distributed a letter denying the allegations against Cycle Solutions (see above), the original Reddit post was updated with a portion of an internal email correspondence between Charlie's workers that seems to indicate that they did believe the other store was interfering with their efforts to secure suppliers (this post also appears in our comments section below).

From what I can gather, the correspondence itself is not fabricated, but the information it contains has been presented out of context. Clearly at some point there was concern on the part of Charlie's that Cycle Solutions was complicating their relationship with suppliers, but there's currently no evidence to suggest that this was actually going on. Reached again by phone, Charlie's owner Derek Chadbourne stressed that "to [his] knowledge Cycle Solutions never wrote any letters trying to block us from opening. The person who wrote the post misconstrued information."

As far as the supplier mentioned in the leaked emails goes, Chadbourne tells me that the difficulty his charity/store has encountered in setting up an account with them relates to timing not third party interference. "OGC doesn't open new contracts in the spring, but the rep's going to look at us in the summer." Meanwhile, Roger Martins of Cycle Solutions tells me that his store plans on posting additional information to clear its name over and above the Norco letter it received this evening. We'll post those documents if and when we get our hands on them.