Spotted in Chinatown is this creative little bit of election sign tampering. Although it looks a lot like a Photoshop job, close examination reveals it was put together the old fashioned way. Determining its exact message, however, poses a bit more of a challenge. With the four major parties in Trinity-Spadina represented, does it mean its creator finds it too hard to choose between them? Maybe the idea is that the parties â or the politicians themselves â aren't as different as they'd like us to believe? Or perhaps it implies that "coalition" should have never become a bad word.

Technically speaking, tampering with federal party signs is considered mischief under the Canadian criminal code (punishable by a $5000 fine or six months in jail), but at least the ambiguity saves this one from partisanship. And, hey, it could be worse. Along with a rash of vandalism directed at Liberal supporters in St. Paul's, Olivia Chow has reported that her signs are being defaced. And then there's this - which is just downright depressing. 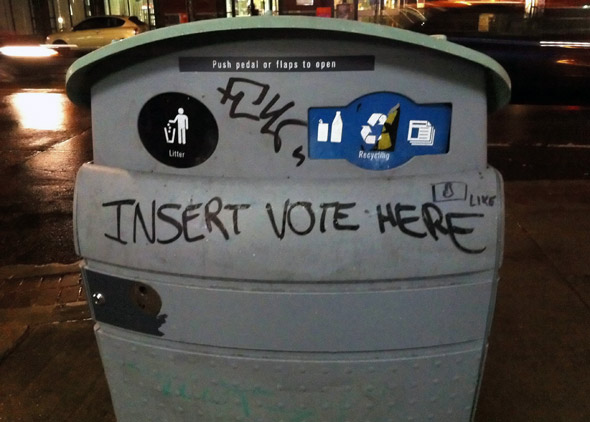