The slippery slope between graffiti and an art mural

When news broke last week that Evergreen had been issued a summons to clean up the spray painted walls at the Brick Works or face legal action, the question of what exactly the City of Toronto considers illegal graffiti was back in the spotlight. As I mentioned briefly near the end of my post on the Brick Works situation, back in 2005 David Miller had the anti-graffiti by-law tweaked to acknowledge the difference between haphazard vandalism and an art mural, which "has been deliberately implemented for the purpose of beautifying the specific location."

How this distinction plays out when it comes to enforcement, however, isn't completely clear. For instance, when municipal politics writer Jonathan Goldsbie recently tweeted links to two rejected applications (separate link on each word) for exemption from city-issued removal orders on Maria Street, I was dumbfounded as to how the pieces in question were considered graffiti rather than murals. Artistic merit is always tough to judge, but it's be hard to argue that these two examples don't reflect an effort to beautify a specific location.

So I got in touch with Curtis Sealock, a district manager with Municipal Licensing and Standards to ask him how it is that City officials make a judgment on items such as this. According to him, there's no criteria other than the definitions laid out in section 485 of the Toronto municipal code. 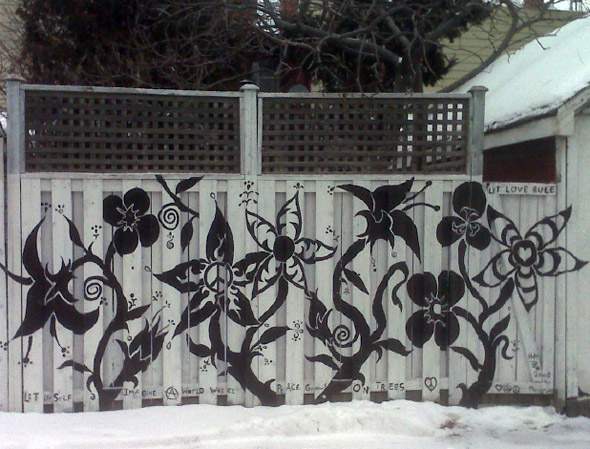 So, for the record, here is the key phraseology. Graffiti is "One or more letters, symbols, figures, etching, scratches, inscriptions, stains, or other markings that disfigure or deface a structure or thing, howsoever made or otherwise affixed on the structure or thing, but, for greater certainty, does not include an art mural". An art mural, on the other hand, is a "mural for a designated surface and location that has been deliberately implemented for the purpose of beautifying the specific location."

For Sealock, the crucial term is "designated." He tells me that Municipal Licensing and Standards take it to mean "something that's been selected by the city or a BIA" rather than solely by a property owner. Put differently, a designated surface upon which a mural is painted must be officially recognized in some way for that piece to be considered an art mural.

That does make some sense, but the problem is that the wording of the by-law itself doesn't really make this crystal clear. From my perspective, the meanings of words like "designated" and "deliberate" are open to interpretations that deviate from something along the lines of "officially selected." To a certain extent Sealock seems to agree. "Everybody seems to have a different opinion when it comes to graffiti... that's why we have an appeals process," he tells me.

Ultimately, then, Etobicoke York Community Council will make the final decision on the fate of the murals -- or, as the case may be, graffiti -- in question. One wonders if it wouldn't be better to shore up the language in the by-law rather to rely so heavily upon an appeals process, but perhaps the ambiguity in the by-law is actually a good thing. Although the current system might lead to confusion once in a while, its ample grey area might also mean that fewer complaints regarding spray painted murals are lodged in the first place.