So it's pretty much Roncesvalles day on blogTO. Along with taking a tour of the yet-to-be-completed construction with Rob Ford and members of the BIA this afternoon, I also spent some time checking out the new transit platforms that have been installed on the street. For whatever reason I've become more and more interested in urban infrastructure of this nature and ever since hearing about these, I've been curious to see just what the finished product will look like (in fact, it's the main reason I made the visit today).

What are they and what do they do? As Joshua Tusin noted in his post on them last year, transit platforms "are meant to facilitate smooth boarding on the new streetcars" and will "make things safer for pedestrians." They accomplish this by eliminating the need to step onto the road when entering and exiting streetcars (something which is crucial for those with mobility devices). 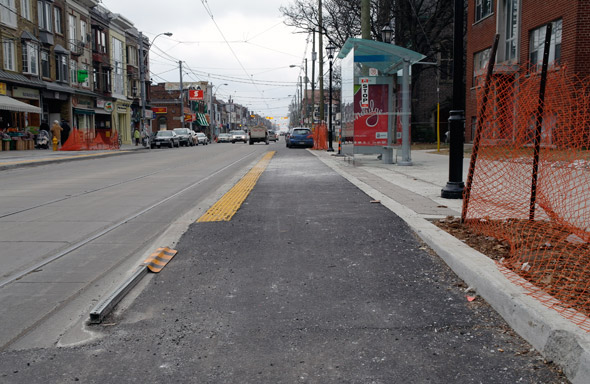 But therein lies some of the criticism these have received from cyclists. Although the north/south entrances to the platforms are sloped so that cyclists can easily ride on them (and thus not in the line of the streetcar), concern has been expressed over potential confusion over who these platforms belong to - pedestrians or cyclists. For my part, however, I suspect that signage (to come in spring) will ensure that people shouldn't be confused.

It seems rather obvious that when passengers are boarding the streetcar, cyclists must cede the right of way to them. That's the same as it would work on a street without a platform. Where it might get a little dicey is with people who ignore or disobey the instructions. In the absence of a platform, it's extremely rare to see folks standing out on the street waiting for the next vehicle. That lane, after all, is the domain of cars, and even when it's busy, people tend to value their personal safety enough to wait on the curb. 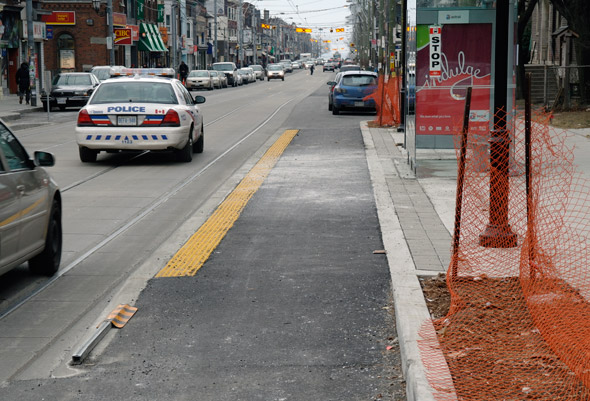 But the question is whether or not this will be the case when the threat of collision is reduced. Because bikes are quieter, less dangerous and (mostly) a less frequent source of traffic along this stretch, it wouldn't surprise me to see prospective passengers using the platforms while waiting for streetcars that have yet to arrive.

That's of course speculation -- and a skeptical bit at that -- but if you've ever been riding a bike and had a pedestrian shoot off the sidewalk into your path without looking, you're probably also of the belief that cyclists are often low on their radar.

But here's the thing: so what? If ideas were abandoned because of the potential that people might not follow instructions, that'd put a pretty serious damper on innovation. The real test will come in the early summer when construction is (hopefully) complete and all forms of traffic increase along Roncesvalles, but so far these transit platforms look okay to me.