Anyone who has travelled down Queen Street East between Connaught and Coxwell over the past few months likely noticed the blue fencing, puddles, piping, and general mess from the ongoing construction as the City replaces water mains.

A number of businesses almost look closed - when I was down there a few days ago, my only indication they were open were a few bright signs proclaiming just that. "YES!" they shouted, "WE'RE OPEN FOR BUSINESS DURING CONSTRUCTION".

The construction began in mid July - it's now December, and the area is still a mess. With Christmas right around the corner there's no doubt local businesses are taking a hit.

Shirley Rumundi is the owner of Beaufort Decor, and she her business has been greatly affected by the ongoing work. In fact, she's been unable to open her shop due to construction on eight days - receiving no advance notice. She says the situation is very aggravating.

"I've worked hard, and my customers have been loyal, so I've managed to hold my head above the water line, but I'm definitely not ahead. There's been no growth."

Rumundi says she contacted City Engineers, and while they've been as helpful as they can be, things are not progressing any faster. She says the local businesses were very vocal about not having major construction during the Christmas season - yet here we are.

"As an outsider looking in, it looks to me like this is drag, drag, drag your feet, then panic. It's three weeks from Christmas, and there's still a big, ugly blue fence, water pooling where people walk... no one ever knows what's going on." 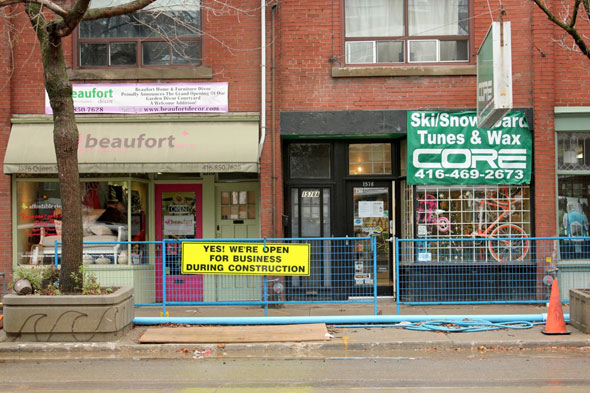 Manager of Core BMX and Bikes Chijioke Okafo says the construction was supposed to wrap up two weeks ago, and to date his store has not received any updated information about the construction.

While Core BMX and Bikes has not been as affected as some of the other stores in the area, they are still experiencing issues, including a power cut off at one point.

"We're getting our regulars," he says, "If you're going to come here, you still will - but now customers will complain about it on the way. I mean, it's a mess outside. It's dirty, loud, and annoying."

Both Rumundi and Okafo say they understand the work needs to be done. However, for the businesses in the area this has turned into a five-month headache.

And there might not be an end in sight yet for the area. Rumundi says she recently received notice that the City will start digging December 20th, and that Hydro will be working on light fixtures. According to the notice, work will continue through May.

Writing and photos by Lauren Souch