What's the deal with that strange clock tower near Yonge and College?

So went a question that I received from a reader yesterday afternoon, and rather than merely answer it privately, I thought it worth a quick little post as I've been asked about the structure a few times.

The tower in question was originally part of a Fire Hall, which was built in 1872. From what I can gather, towers were a pretty common features of fire stations from this period because they were used to store and dry the hoses. Examples of such towers can also be seen at station 312 (at 34 Yorkville Ave., built in 1878) and 315 (at 132 Bellevue, built in 1878, though the current tower is a replica of the original).

So that's why the tower is there. But, there's another aspect of the story worthy of note. After the Fire Hall was decommissioned, the lower part of the building became a Chinese food restaurant in the 1950s (seen from a distance in the photo below), but it is probably best remembered as the St. Charles Tavern, which opened in the 1960s and was the centre of Toronto's gay bar scene until it closed in 1987. 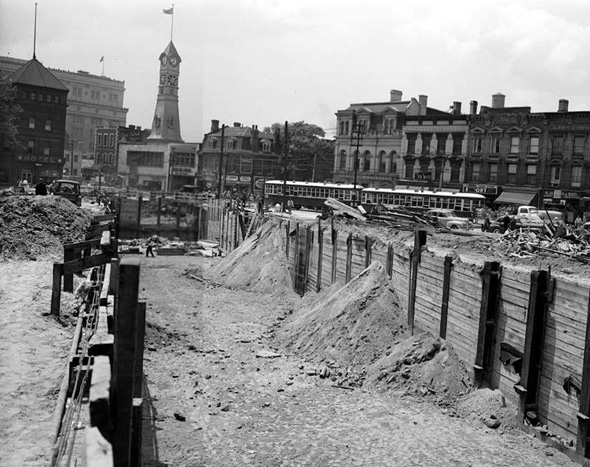 In a sort of proto-Pride Parade, drag queens would hold Halloween shows outside the tavern that became very popular. Unfortunately, however, Toronto was a far less kind place to the gay community during those years, and it was something of a tradition for homophobic onlookers to throw eggs and tomatoes at the queens as they showed off their outfits.

Since the St. Charles Tavern closed its doors, a variety of retail locations have occupied the buildings below the tower. It had fallen into a pretty sorry state in the years that followed, but was given the restoration treatment in the mid 1990s. The structure was designated a heritage property in 1974.

First photo from the Wikimedia Commons, second from the Toronto Archives.