Macdonell Avenue has got a brand new set of two-way sharrows, but the question is who painted them? Given that the street is not listed on Toronto's cycling infrastructure plans, here's betting that this is the work of the Urban Repair Squad.

Although the project is not featured on their website, I got in contact with Martin Reis who also noticed the project on the weekend. He's photographed a number of URS projects in the past, and suspects that this fits the bill. "That must be URS or the Parkdale Urban Repair Squad (PURS)...my guess is that it would be it's a fix for the staggering lack of bike infrastructure in the Parkdale or West Toronto area."

Perhaps the most obvious evidence that these are the work of the URS or PURS is the symbol itself. URS markings are distinct from those used by the City, and the sharrows in question are in similar to those used in past guerrilla sharrows projects, like the ones that graced Hallam before the city made the street an official recipient. 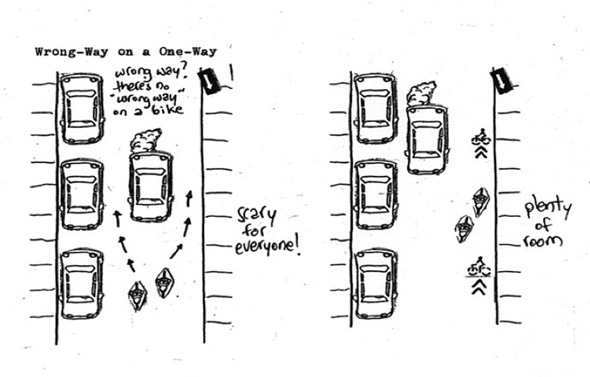 Also significant, of course, is the fact that these are two-way sharrows. As far as I can tell, the City has no plans to implement such markings. There's no mention of them on the Bikeway Project lists, nor do they appear on Toronto's sharrow FAQ page.

Two-way sharrows, as is the case here, are placed on one-way streets to encourage visibility for cyclists who may be moving against the flow of traffic. Macdonell is mostly a one-way southbound, but the narrow and bumpy Sorauren means that cyclists often use it as a northerly route as well. Its popularity is likely also linked to the fact that it leads almost directly to the portion of the the West Toronto Railpath that's been completed to the north.

Some might categorize these as dangerous (and I'm sure many will complain they're likely illegal), but from a pragmatic standpoint, they might just make sense. As Reis puts it, it's as if they say, "Hey, let's share the road with you here as we go counter flow for a couple of blocks, thanks." 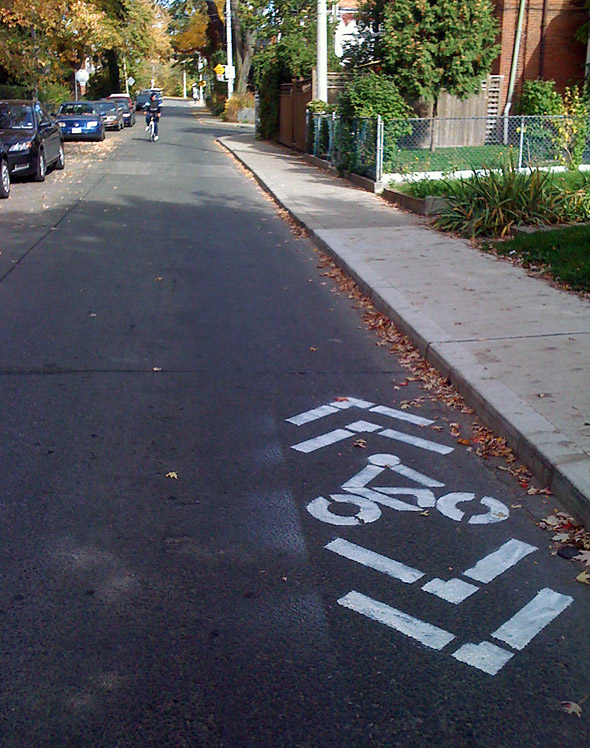 Photo credit goes to blogTO reader Colin Powell who spotted the new sharrows. The graphic is from the Urban Repair Squad Manual (PDF).