Yesterday we published a feature on the top 10 Toronto Landmarks. The piece, unsurprisingly, stirred up quite a bit of discussion in the comment thread, with many readers taking exception to author Rick McGinnis's choices. I don't share this sentiment - it's refreshing to see a top 10 list that eschews the obvious in favour of a true evaluation of the quality of its selections - but I do think it makes sense to do a second take of the exercise. There's just too many candidates for such a small list.

Landmarks present another difficulty for the creation of top ten lists over and above the difficulty of reducing the many possibilities down to smaller set of selections. On the one hand, they do have to be wide-known in order to live up to the term (at least in contemporary usage), but, on the other, popularity alone can't - or perhaps shouldn't - really be the sole factor under consideration. The historical significance, aesthetic merit and contemporary relevance of these places or structures must be taken into account in addition to the degree to which they're recognizable.

That's why I like yesterday's list. Sure, I wouldn't have chosen all the same landmarks, but that's what made the list thought-provoking. So, in an effort to keep the conversation alive, let me present a second set of selections, some of which take heed of reader recommendations, some of which don't. I could position this as landmarks 11-20, but I think it makes sense to run it as a counter-list to our first offering. The only proviso I'll make is that I won't repeat any of Rick's selections (so no CN Tower for this list!).

Oh, and to those who say there can't be two top 10 lists of this sort, I say that's ridiculous...there are already thousands of competing versions of these lists in the minds of Torontonians. The question is, which of these two lists will readers deem better? 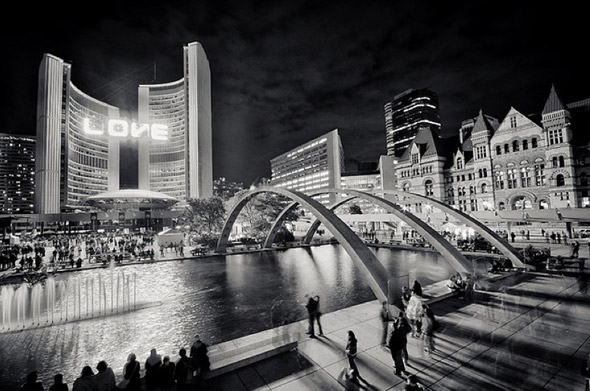 The omission of this from Rick's list is probably my only real disagreement. The Viljo Revell designed City Hall is an iconic and important piece of Toronto architecture, and has been crucial to the city's branding efforts over the years. Photo by rh89. 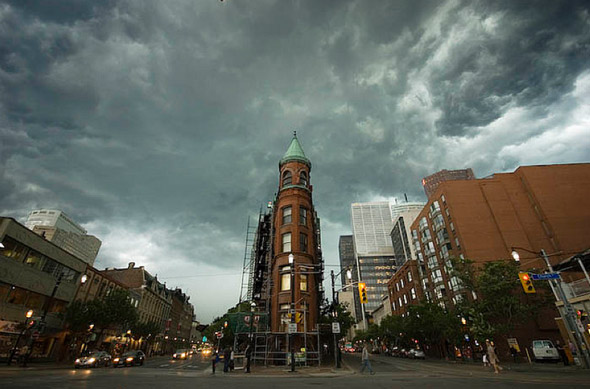 Despite its relative lack of height - only five storeys - Toronto's Flatiron is nevertheless a gorgeous structure, with its dignified red brick facade and rear mural by Derek Michael Besant. Built in 1892, it precedes its more famous counterpart in New York, which, though taller, wasn't completed until 1902. Photo by blainekendall.com. 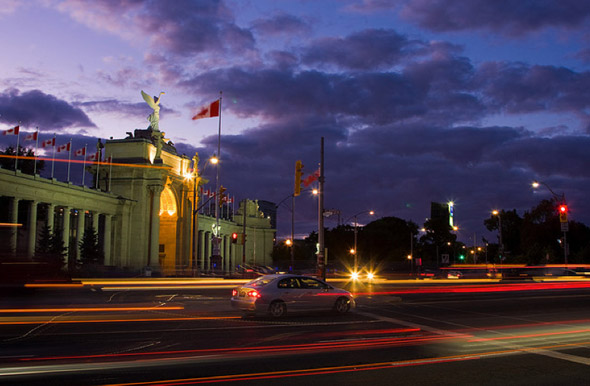 Toronto seems to lack many gates of this type, which is why I suspect that the Princes' Gates (not Princess!) have become such an icon. Completed in 1927, the structure was to be called The Diamond Jubilee of Confederation Gates, but was changed to the current name when it was discovered that Edward, Prince of Wales and Price George were touring the country the year the gates were finished. Photo by Neil Ta | I am Bidong. 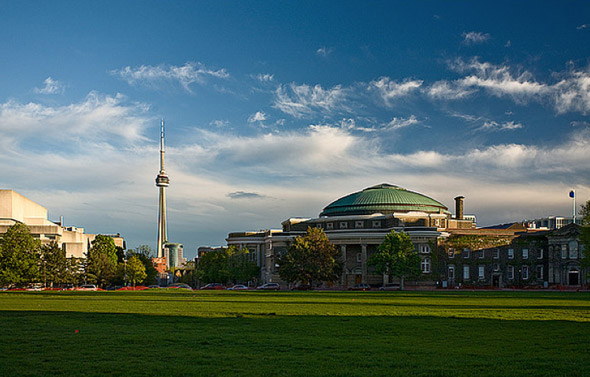 This might a bit of a cop out, but instead of choosing University College or Convocation Hall (or even Hart House), I think it makes the most sense to label the nexus at which all of these buildings meet as the U of T landmark that makes this list. And besides, there's nothing like walking across the Circle on a brisk autumn day with the skyline in the background to make one feel like he's in a special place. Photo by wvs. 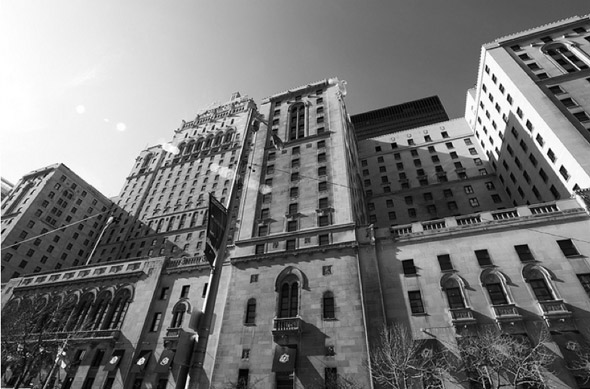 This one is a must-include for me if only because the Toronto skyline was defined by the hotel's presence from 1929 all the way to the mid seventies when the CN Tower arrived. That presence is quickly fading, but not so fast that it doesn't make the cut. Photo by dan cronin.jpg 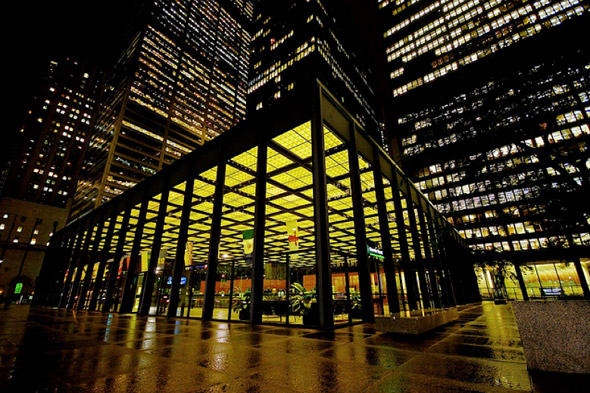 The Mies van der Rohe-designed TD Centre was Toronto's first modern office tower complex, and paved the way for the development of our skyscraper-heavy financial district. And, for black, rectangular buildings, they remain somehow remarkably pleasing to the eye. Photo by arcticlamb. 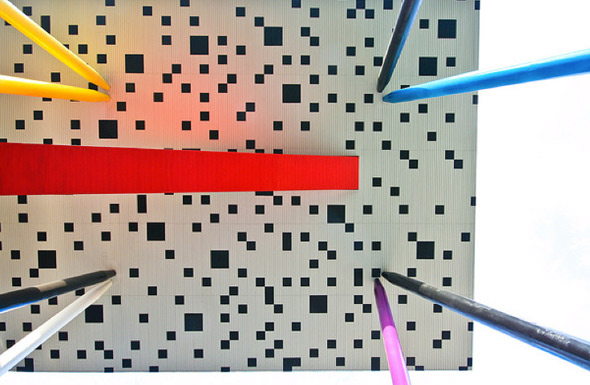 The Wil Alsop designed Sharp Centre for design may not rub everyone the right way (though I suspect it's more widely liked than the ROM crystal), but it's impossible to argue that the building isn't dramatic, challenging and memorable. Photo by Scott Norsworthy. 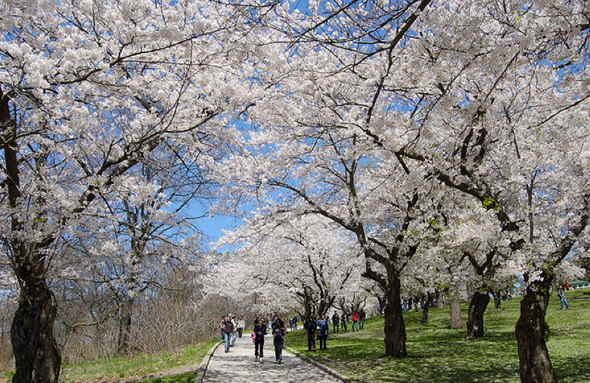 This is the first one I have my doubts about. But, it seems strange to me to have a list of Toronto landmarks without a single bit of greenspace making the cut. So, the question becomes, why High Park over Trinity Bellwoods or even the Don Valley? Well, the Don Valley isn't really a park, and Trinity Bellwoods doesn't offer nearly as much territory to explore. Good enough? Photo by thru the night. 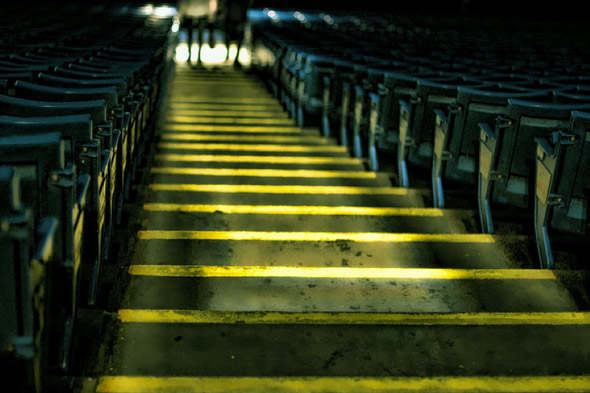 Yes, I'm aware that the building is now properly referred to as the Rogers Centre, but it'll always remain the SkyDome to me. And while baseball's popularity has certainly struggled in this city over the last decade or so, and the Dome is far from the technological marvel it once was, I can't help but think that Toronto would be a radically different place were it to disappear. Photo by Chewie2008~. 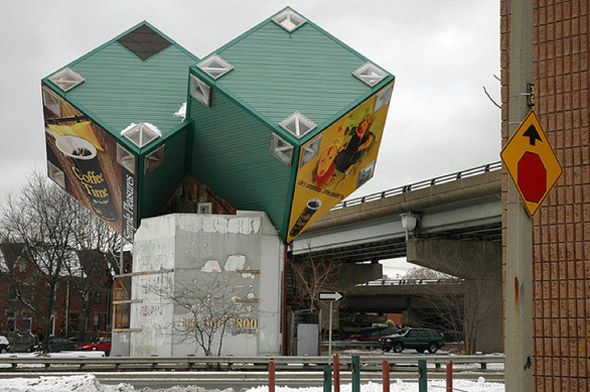 This might not have made many people's lists, but there's something about these that scream Toronto to me, despite the fact that there are similar examples of this type of housing in Rotterdam. Inspired by Piet Blom's design, Ben Kutner took a parcel of land deemed unfit for development and built what's become a memorable bit of Toronto architecture. Photo by picturenarrative. 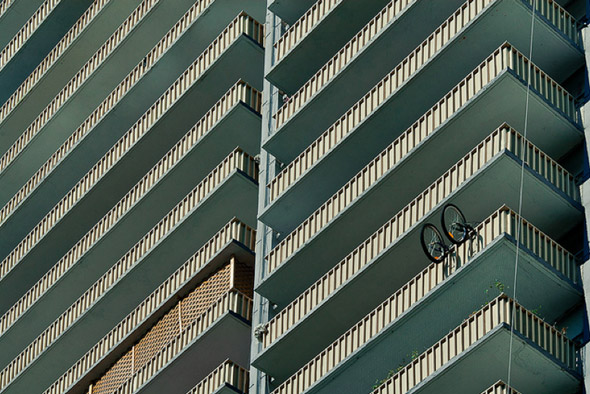 Not many would put St. James Town on such a list either, but the 1960s community housing development, the site of a recent fire that's stranded residents of 200 Wellesley St., speaks volumes about the planning philosophies of a period that saw the rise of the concrete apartment structure throughout the city. Photo by Phil Marion.

(Please disregard the map below for the time being).