"I plead to you, make passionate love to your city," said moderator Paul Bedford to a crowd of several hundred gathered on Monday night for a mayoral debate focused on heritage.

Bedford, former Chief Planner of Toronto, meant that we should take care of our historic landmarks and cultural landscapes, which are priorities the debate's organizers -- Heritage Toronto and the Toronto Historical Association -- are worried don't receive enough attention.

Appropriately held in the historic St. Lawrence Hall, built in 1850 and restored in 1967 for Canada's centennial, the debate provided the top five candidates, plus Rocco Achampong, the opportunity to weigh in on heritage preservation.

Bedford's first question: How would you make heritage a more important part of the decision making process at City Hall?

Rob Ford, surprisingly, called for more money and staff for Heritage Toronto. "What would you rather have, $100,000 coming to Heritage Toronto...or $100,000 for free food for council at council meetings?" Ford asked. The extra money Ford spoke about would thus come from the reallocation of existing funds. 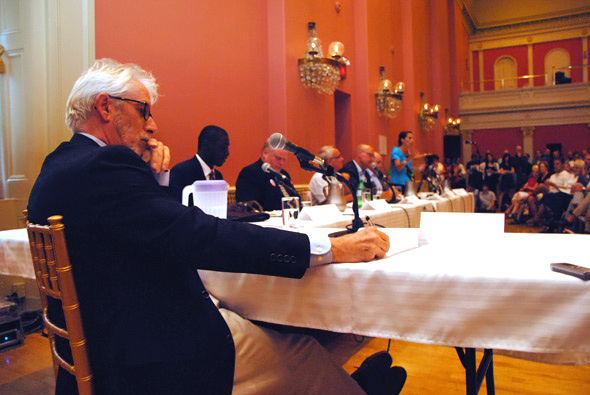 George Smitherman, riding on the wave of his heritage preservation policy announced earlier in the day, called for a crackdown on those who own and neglect heritage properties, more resources for Heritage Toronto, and a deeper engagement in the preservation process by local groups.

Joe Pantalone complained the provincial government is not giving its fair share to heritage preservation, and Rocco Rossi said that heritage needs to become a larger component of the overall planning process.

The conversation then turned to the proposal of a Toronto Museum.

"As much as I love the idea in concept, I don't support it in practical terms," Smitherman said. He added that any extra money should be put towards transit and infrastructure.

Predictably, Ford dismissed the idea outright. "We cannot afford it. Period," he said.

Thomson and Rossi were skeptical about a museum, and Achampong and Pantalone supported it. 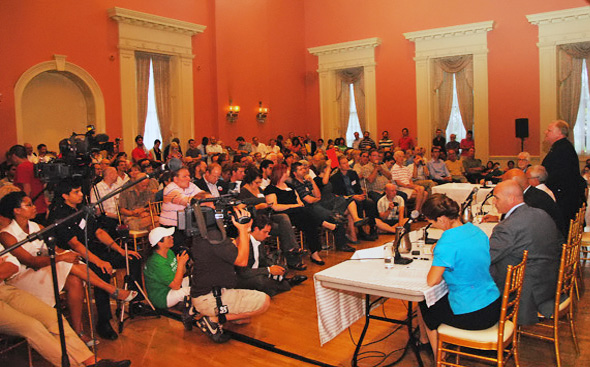 St. Lawrence Hall was packed with a downtown crowd, and, judging by the volume and the enthusiasm of applause, Smitherman was the clear favourite. By the same standard, Ford was the night's loser.

"You really believe we have to spend $45 million on renovating Nathan Philips Square?" Ford asked at one point of the debate. Spontaneously, the audience shouted back "Yes!"

During his closing remarks he told everyone to ask themselves on election-day who they trust to avoid scandals at City Hall. The audience exploded with laughter.

And during another awkward moment for Ford, when asked where he'd like to hold a heritage walk, he said "I'd love to do a walk, but I'd rather do a jog because I could lose a hundred pounds."

Monday's debate allowed Smitherman to speak about his work as a provincial MPP in the preservation of Massey House and preventing new condo developments from dwarfing St. James Cathedral, which endeared him to the heritage conscious crowd.

Achampong, however, came across as nervous and failed to win more than polite applause. He ran out of time at several points and conceded he "needs to learn to debate in bullet point form."

With the election winding down to the final stretch, including fringe candidates is little more than a token gesture. Narrowing the race down, on the other hand, would have given more time to individual candidates to get beyond the sound bites and engage in real conversation.

Since the real race will begin in a week, the debates should become more focused. In light of last night's performance, that may or may not be a good thing for Rob Ford.