The imposing Victorian structure located on a circular lot just north of Spadina Avenue and College Streets quietly sits in the shadows of much taller downtown structures, but in late nineteenth-century Toronto, it was an easily recognizable landmark, even from a distance. This is clearly evident from W. Wesbroom's colour lithograph, published in 1878, and entitled Bird's-Eye View of Toronto.

Even before becoming a U of T student, this building always intrigued me. But when I finally got to explore it, the rundown interior was sadly disappointing in terms of the architecture and state of repair. Because it seems to be isolated from the rest of the campus, it doesn't feel like a part of it, and it was obvious to me that it had seen better days. 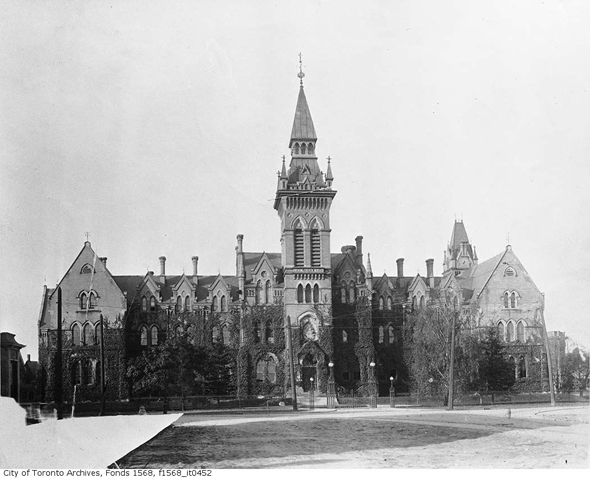 For some time, 1 Spadina Crescent has been part of U of T's lore, owing much of its eerie reputation to the Gothic Revival style that it possesses, as well as an unsolved murder and an accident back in 2009, in which a young ghost hunter perished after having fallen from the roof. But behind the "creepiness factor" that has been highlighted over the years lays an interesting history that has often overshadowed. 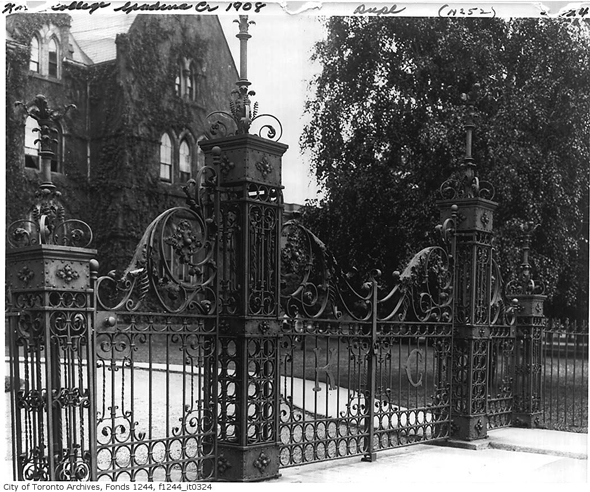 According to Larry Wayne Richards's University of Toronto: An Architectural Tour, the building was designed by the architectural firm of Smith and Gemmell and erected in 1875 in order to house the Presbyterian School of Knox College. Smith and Gemmell were also responsible for designing another landmark, the Church of the Redeemer at Bloor Street and Avenue Road.

When Knox College moved to the present location on St. George Street in 1915, 1 Spadina was converted into the Spadina Military Hospital, treating returning veterans from Europe. It's not hard to imagine that their time there was anything but pleasant, arriving from the horrors of the trenches to an aging, intimidating structure, which seemed to be in the centre of the city, but that kept them isolated while they convalesced. Amelia Earhart, who unsuccessfully attempted an around-the-world flight in 1937, was employed in the diet kitchen of the institution.

During the 1920s, the site attracted the attention of Conn Smythe, the owner of the Maple Leafs, who wanted to build a new arena. Along with a group of businessmen, he proposed to demolish the existing building and erect a 1,600-seat stadium, modelled after the Olympic Arena in Detroit. However, this proposal was never implemented and Smythe instead built Maple Leaf Gardens at Church and Carlton Streets. 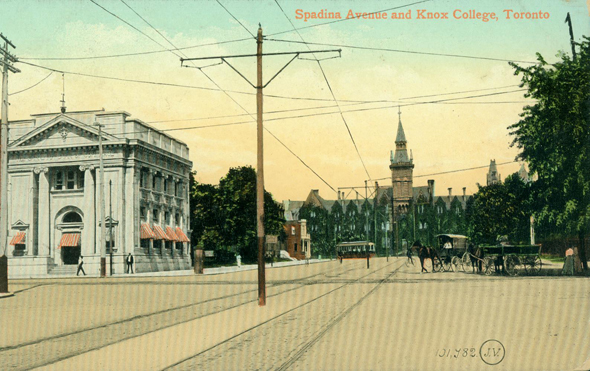 All of these tenants have adapted the structure to their own use, often adding extensions, which is the reason why the back appears completely altered, although the front faรงade has remained intact. 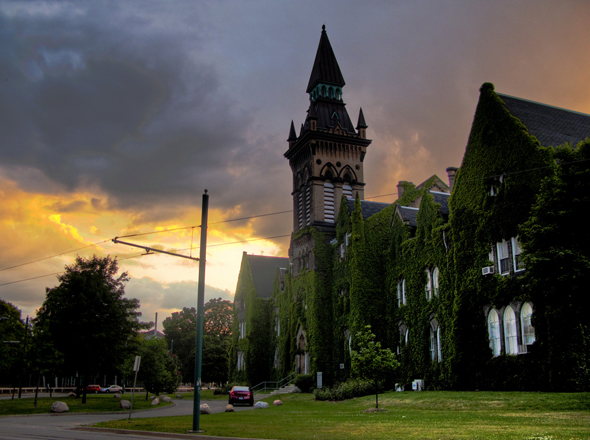 In 2005, W. Bernard Herman, an alumnus who graduated in 1932, donated $1 million in order to restore the entrance and the grand staircase, which will be named the Sharon and Bernard Herman Lobby. In 2007, the firm of Kuwabara Payne McKenna Blumberg architects submitted a master plan for the revitalization and expansion of the building, which will eventually provide space to the Department of Fine Art.

Photos from the City of Toronto Archives, Wikimedia Commons, and postcard from the author's collection.