At Tuesday's CP24 mayoral debate Rob Ford made his latest controversial statement. "We can't even deal with the 2.5 million people in this city. It's more important that we take care of the people now before we start bringing in more," he remarked when the candidates were probed about their opinions regarding the recent Tamil migrants who arrived on Canada's west coast this last week.

His political opponents quickly pounced, though this is only the latest in a series of intolerant sounding remarks. Let us recall his comment that "Orientals work like dogs," or the misinformed notion that "If you are not doing needles and you are not gay, you wouldn't get AIDS probably, that's the bottom line"?

This is great material for candidates trying to score points against a candidate who might just be the frontrunner.

So is Ford a racist? It does sound like it sometimes. And who knows? He might be. But what about Tuesday's comments?

Ford's platform is based on the premise that this city is broken, in chaos, and incapable of taking care of itself as currently constituted. If you subscribe to this diagnosis, then you'd probably see any new people coming to this city as a problem. 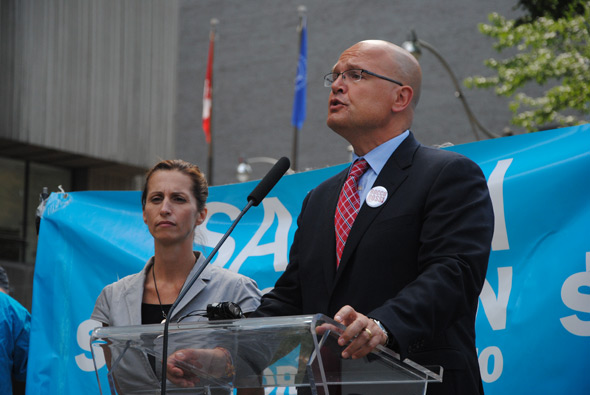 A careful look at the transcript reveals that Ford never said anything specifically about Tamils. He said he opposed Toronto's Official Plan, which foresees the city growing by a million people in the next 10 years. His point, as I understand it, was that more people in general are the problem -- not specifically Tamils or foreign immigrants.

Questioning the wisdom behind these words is something that should (perhaps must) be done, but the statement itself is not, strictly speaking, racist.

I don't often agree with Ford, but he's right to claim that the framing of his comments as prejudicial is mostly "spin and political gamesmanship."

On Wednesday, in what seemed like something more out of reality TV than a serious political campaign, Rocco Rossi tried to confront Ford live on TV at City Hall about his statements. Ford fled the scene as Rossi began speaking, calling the encounter a "political game."

Rossi and Sarah Thomson even staged a joint "rally" on Wednesday to denounce Ford -- though it was more of a press conference scattered with their political supporters holding pro-immigration and anti-Ford signs.

"How many times are we going to let him show his intolerance and true prejudice?" Thomson asked. 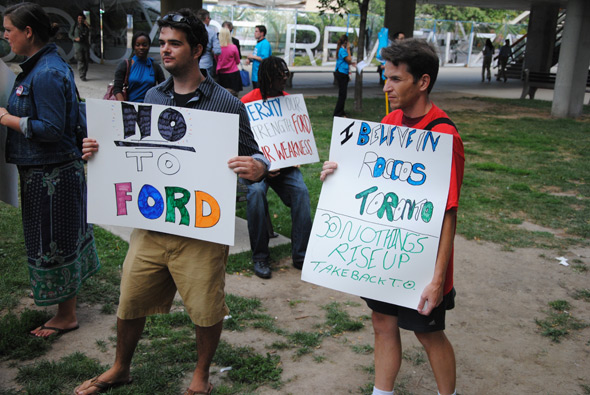 Both candidates were careful with their words. They never directly called Ford a racist, but their speeches certainly suggested it.

On Wednesday George Smitherman said Ford "should hang his head in shame." And Joe Patalone said he wants him withdraw his statement.

Ford is anything but a smooth talking politician who always knows how to express himself in a crowd pleasing way. But it's silly to exaggerate his remarks and use them to say he's a racist -- at least not until there's a real smoking gun. I think this not only for honesty's sake, but because the publicity is only raising his profile.