In Toronto Remembered: A Celebration of the City, William Kilbourn writes that Union Station is "the soul and heartbeat of Toronto." Over the years, it has been the main point of entry to the city and to Canada for new immigrants (along with Pier 21 in Halifax), and saw thousands of soldiers depart to Europe during World War II.

Located right across from the Royal York Hotel on Front Street, Union Station remains the focal point of transportation in Canada. According to the City of Toronto, the latest statistics from 2007 reveal that it serves about 165,000 passengers daily (and this number is expected to rise). 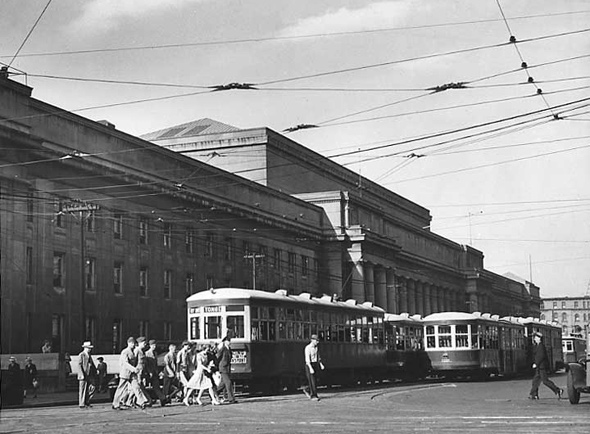 According to Mike Filey's Toronto Sketches 3: The Way We Were, government officials first started planning a new railway station in 1905. Aside from the dire necessity for a new station due to the gradual increases in traffic, the Great Fire of 1904 was also likely one of the reasons behind this new arrangement. The devastating inferno destroyed a large chunk of the city, razing 104 buildings between Melinda Street in the north and the Esplanade in the south. It's thus likely that many Torontonians longed to see their city revived after such a disaster, and a new Union Station would provide quite the symbol of renewal. 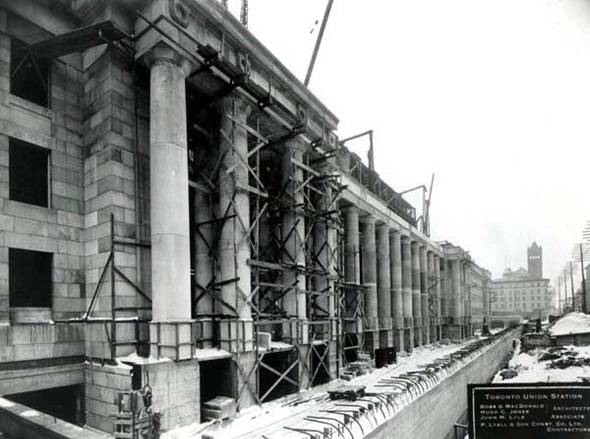 One of the reasons behind the delay in construction, (in addition to the outbreak of World War I) was the fact that the new station required the erection of a viaduct, which would elevate the numerous tracks on the edge of the waterfront. This way, the waterfront would be more accessible to both pedestrians and vehicles. The need for the viaduct caused considerable tensions among the authorities with regard to its financing, but the construction on the new railway station finally commenced on September 26, 1914 and ended six years later. 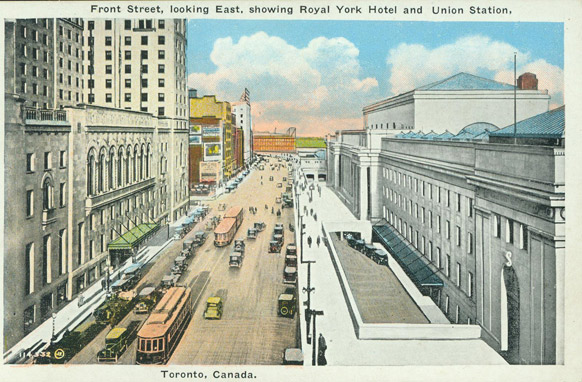 The new station was completed in 1920, built in the Beau Arts style and designed by the architecture firm of Ross and Macdonald from Montreal in collaboration with Hugh Johnes. The first train, however, didn't pull in until August 6, 1927, when the station was opened by the Prince of Wales and his brother, Prince George. In 1920, there were still no railway tracks going into the station. Even though the officials finally agreed on the matters pertaining to the much disputed viaduct in 1905, the plan for it was altered in 1913 and again a year later. The work on the elevated track scheme did not start until late 1924, nearly five years after the new station had been constructed. 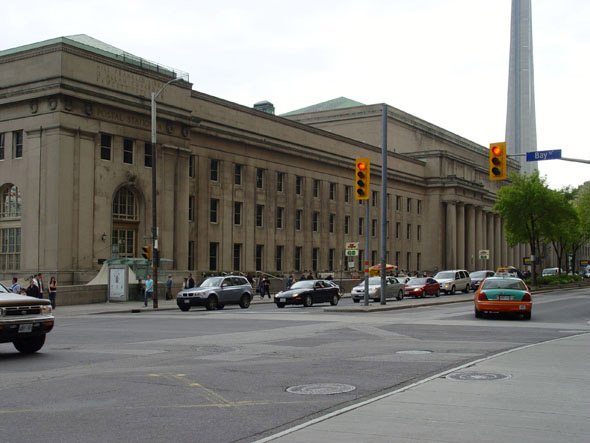 Kilbourn remarks that despite all the bureaucratic difficulties that were finally overcome, Union Station was still not in a proper working order. For example, some tracks had not been extended to the new station, meaning that many incoming passengers would exit their trains at the old station located just down the street and then have to walk over a labyrinth of rails, often next to moving locomotives.

Union Station was built at the time when the railway served as the primary medium of long-distance transportation, and it's obvious for people who use it regularly that it requires extensive renovations. Back in June work began on revitalizing the station, which will cost $640 million with joint funding coming from the municipal, provincial and federal levels of the government. One of the key aims of this project is to preserve the heritage aspects of the building. Let's hope that this revitalization will bring Union Station back to its former glory.

Photos from the Wikimedia Commons and postcard from the author's collection.