Is a class-action lawsuit against Toronto Police Services for their conduct during the G20 inevitable?

A class-action lawsuit against the City of Toronto and/or Toronto Police Services for misconduct during the G20 summit is looking more like a probability than a possibility.

During the G20 meetings in Toronto last weekend, the largest mass arrests in Canadian history took place. It was a weekend marred by violence, vandalism, and an overzealous, overbearing, $1-billion security blitz that categorically stripped Canadian citizens of some of their fundamental and most valued rights and freedoms. It was a weekend that I'll never forget, having left an indelible and negative mark on our city's historical record. The debates will no doubt rage on for a long time to come and for some people affected by all of this, the scars will be permanent.

Peaceful protesters that gathered at the designated protest zone of Queen's Park were beaten and pepper-sprayed, trampled by police horses, and snatched up by plainclothes police officers and dragged behind police lines. Citizens walking to work and having nothing to do with any protests whatsoever were forcefully tackled, arrested without cause, and detained for as long as 36 hours before being released without charge. Accredited media were given ultimatums that prevented them from doing their jobs when they were explicitly instructed to stop reporting and leave the area or face immediate arrest. All around the downtown core, far from the designated security zone, police conducted unlawful searches and property seizures and disallowed peaceful assembly -- unequivocally violating the rights bestowed upon us by the Canadian Charter of Rights and Freedoms.

Furthermore, coordinated corralling {or "kettling") by riot police and unprecedented, terrifying mass arrests occurred and were well documented outside the Novotel on the Esplanade, at Queen's Park, and at the intersection of Queen and Spadina.

In all, over 1000 people were arrested and processed, and an additional indeterminate number (possibly in the hundreds) were held mercilessly in overcrowded, dark, rank police vehicles for hours on end and were only released without detention due to an overflow of detainees at the Eastern Avenue Detention Centre. At the detention centre, reports of chronic logistics failures, confusion, and highly questionable behaviour on the part of police officials have been numerous. To make matters worse, the vast majority of protesters who were brought there were guilty of absolutely nothing. For two days, exercising our rights to free speech and in some cases, simply walking on our sidewalks, was an offence punishable by temporary detention without charge. 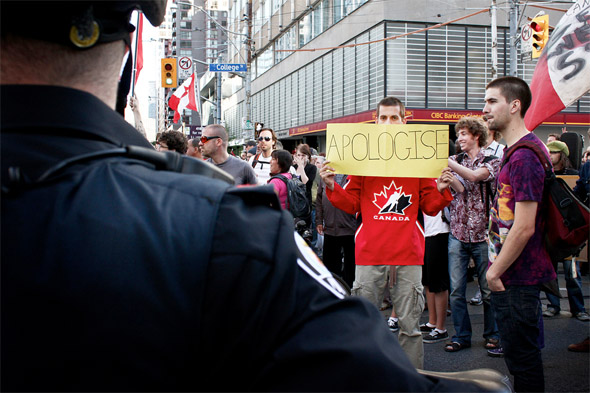 For most of the above reported incidents, the mounting evidence is so plentiful and so public that it seems inevitable that calls for a public inquiry will eventually have to be answered. How exactly this will happen is not clear, given that, one by one, our politicians are failing us. Toronto mayor David Miller has made it clear that he fully supports the actions of the police force, Premier Dalton McGuinty thinks an inquiry is unnecessary, and Stephen Harper is lauding his security team for having ensured that "thugs don't rampage around the city wreaking more havoc," completely ignoring the innocent casualties of the massive Integrated Security Unit's indiscriminate, sweeping use of intimidation and force.

Supposing a public inquiry isn't called, in the very least the mounting evidences of wrong-doing will be virtually insurmountable when the many lawsuits -- which appear to be inevitable -- are carried forward in the courts.

The events that transpired in Toronto last weekend are strikingly similar to the a number of mass arrests that occurred in Seattle and Washington D.C. earlier this decade, all of which were found to be unlawful. Successful class-action lawsuits followed the mass arrests in Seattle in 1999. Mass arrests also marked peaceful World Bank protests in 2000, and the mass arrests at Pershing Park in Washington D.C. in 2002. After years of legal battling, $13.7-million and $8.25-million class-action lawsuits were awarded to the hundreds of peaceful protesters who were surrounded and detained, denying them of their First Amendment rights.

We all know that history repeats itself. The citizens and politicians and police force in Toronto are in the early phases of a long lesson that will eventually be learned via arduous legal processes. And it will take a long time for the wounds to heal.

But this isn't good enough.

We need to have a broad understanding of how this happened, why this happened, and what we can do to prevent it from happening again. Only a full public inquiry will achieve this. It would be nothing short of a travesty if one isn't carried out, and the cost to taxpayers will be immense with or without one. When we're forced to turn to lawyers, rather than our elected politicians, to ensure the upholding of our rights and freedoms as citizens, what does that say about the state of our democracy?

Photos: "Uphold Our Charter Rights" by jan.etc, and "Rally for a Public Inquiry Concerning the Actions at the G20" by Jackman Chiu.