Violence on Toronto streets for G20

Yesterday's G20 riots in Toronto were chaotic, to say the least. "I can't believe I was just tear gassed," Nadim Fetaih, 22, tells me after being pepper sprayed by riot police at Queen's Park. "This is Toronto. This is Canada. This shouldn't be happening." Nadim, his sister, Sherbuk, 27, were both pepper sprayed during the standoff at College and University, where hundreds of protesters were cornered off by hundreds of riot police, some on horseback, all in full riot gear.

Some two hours earlier a peaceful G20 protest turned into a riot.

The thousand-strong protest that in Queen's Park yesterday quickly degraded when the notorious anarchists, using the black bloc technique of absolute destruction, congregated and discarded their black clothing.

It is a day that will go down in Toronto's history. A day where over 400 people were arrested in Toronto's streets.

I followed the G20 protests yesterday from the peaceful, women-led beginnings in the early afternoon onwards until 11 p.m. I walked alongside thousands of protesters from myriad groups down University Ave. I listened as they chanted in unison, "Tell me what democracy looks like. This is what democracy looks like!" And then I ran behind the reported black bloc as they terrorized Queen and Yonge streets, smashing storefront windows and CBC vans. 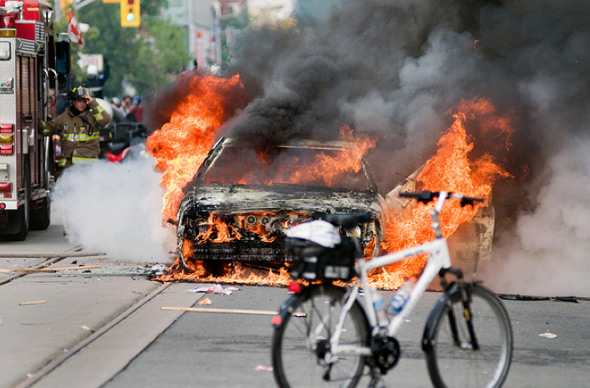 I watched as they lit two police cars on fire at King and Bay Street. I questioned where police were during these two hours of all-out demolition. I watched riot police squeeze us into small sections at Queen's Park and physically beat others that wouldn't comply. (This was the case for Matthew King, 23, who after talking with me, was chased by plain clothed officers and hit with batons after he wouldn't pick up his pop can.) I watched when rubber bullets (or bean bags) were shot into crowds. And I witnessed when small, individual canisters of mace were deployed, albeit not the reported tear gas. I watched as horseback police officers ran at the crowd in "stun squads." I watched when Toronto became saddened by what it was watching.

And I listened as Wayne Adam, 45, said: "It's hard to believe this is Toronto."

I recently published a feature article in Spacing magazine's spring issue about the past decade of protests in Toronto. How far Toronto has come from the notorious OCAP protests in 2000 at Queen's Park, where Molotov cocktails were hurled. To the peaceful, thousands-strong anti-prorogue protest this past January at Dundas Square. I was wrong that Toronto is finished with its violent, police-clashing protests. At least a few aren't finished, anyway. 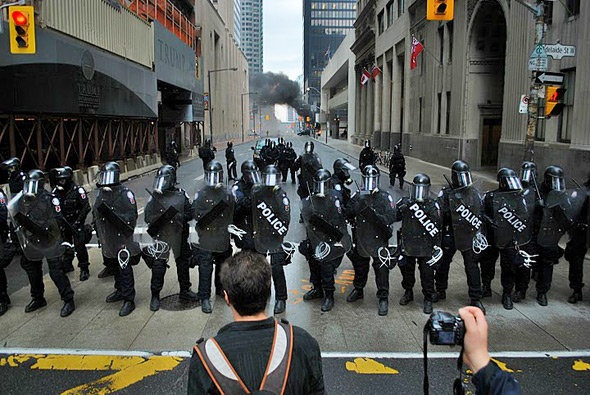 But let me clear the air. This wasn't all of Toronto. As I watched, followed, and, at times, hid from yesterday's protests, the destruction was done by approximately 60 members using black bloc tactics, donning full black get-ups, including black bandannas covering their faces. And they were violent towards anyone taking photos, especially members of the press. They would run, brandishing bricks and large sticks, smashing windows - first Starbucks and banks, and then any storefront along Yonge Street, including American Apparel, McDonald's, Urban Outfitters and Bell. 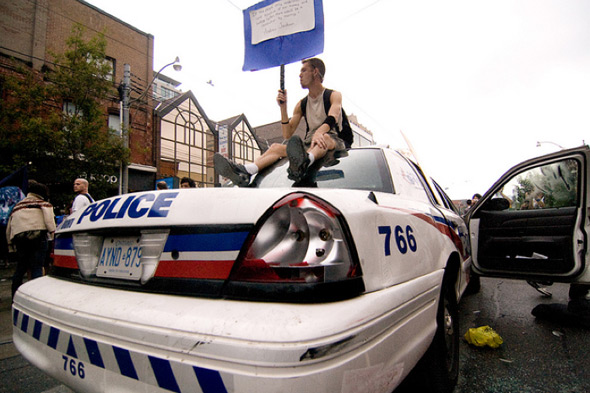 They spray painted walls with slogans like, "Bomb the banks." They surrounded and jumped on top of police cars before lighting them on fire. (Four cop cruisers in total.) And after making it back to Queen's Park, after they trashed another unmarked police van, they shed their black clothing and disappeared into the rest of the protesters.

All this time, it should be noted, there was no police presence. None. For about two hours from around 2 p.m. until 4 p.m. police didn't stop the anarchists running wild through Toronto's streets. It wasn't until protesters got back to Queen's Park that security forces started to cut off the protesters on all sides by slowly advancing riot police. By this time, however, the destruction-wreaking individuals were in plain clothes. 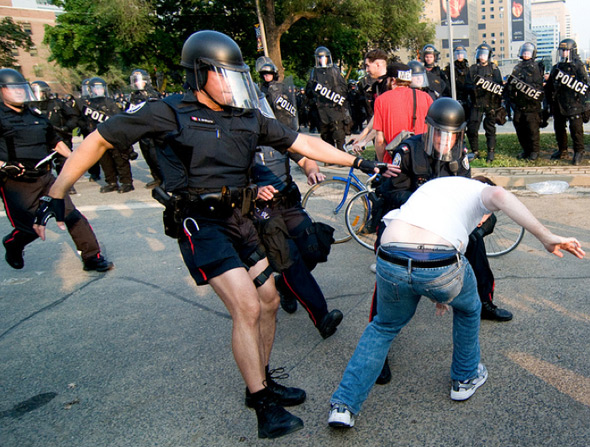 At this point, the riot police were merciless. If you came about five feet to the wall of police - all with riot helmets, batons and shields - they would yell at you to get back. If you didn't, which I witnessed on at least six occasions, they would swoop in on you, strike you with their batons, and pull you behind police lines. These take-downs are sudden and violent things to witness. You wouldn't see the individuals again.

This all occurred in the supposed protest-permitted area of Queen's Park, delegated specifically for protests, for freedom of speech. This wasn't the case. Eventually the police were able to move the protesters up to the Ontario Legislature building, dividing them into four sections. From there, they had horses run at protesters to disperse them. On the flanks, police, typically lined three deep, would stand their ground, occasionally beating their batons off their shields. This continued for about three hours until 8 p.m. when I left for another breaking protest. 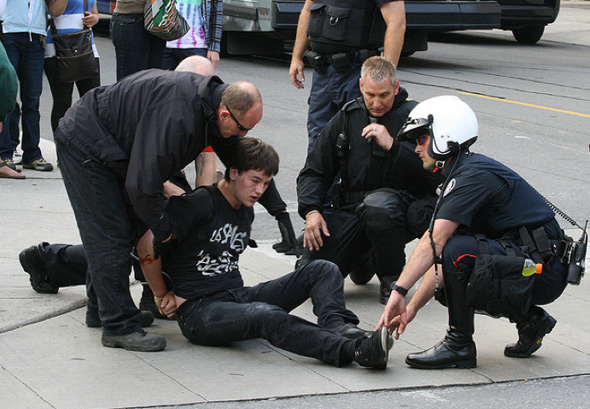 I continued following the protests then on Yonge Street. Seemingly ad hoc, over 1,000 protesters made their way to the G20 fence, chanting, "Whose streets? Our streets!" and "To the fence!" Of no specific individual group, they moved quickly and peacefully until they made it to the fence at Bay St. There, police once again surrounded the protesters on King St., between Bay and York streets. Some more rubber bullets were fired, but protesters had a sit-in until the officers on Bay Street retreated, letting them through.

The protesters at this point continued to wind through the financial district until a smaller group made it to the Novotel hotel, where another confrontation took place. At this point, the protesters had lessened to around 150. The streets, as I left them, were riddled with roaming police officers in full riot gear.

It all started as a peaceful rally in Queen's Park where even children were in attendance. Thousands marched, chanting as they snaked down University to Queen St., waving their placards. And then chaos broke out when splinter groups using black bloc tactics wreaked havoc on the city. Four cop cars destroyed. A plethora of storefront windows smashed. Banks graffiti-laden with anti-capitalism slogans. Some 400 arrested. And, there's more to come today.