On Tuesday evening Habitat for Humanity hosted the top six mayoral candidates for a debate at the Ontario Institute for Studies in Education (OISE) moderated by John Tory.

Though the topic was housing (particularly of the affordable kind), each of the candidates touched on the general policies that have defined their campaigns so far. Rob Ford and Rocco Rossi spoke about waste at city hall, George Smitherman talked about his experience in government, and Joe Pantalone defended David Miller's policies (though, the audience booed when he brought up Miller's housing strategy). 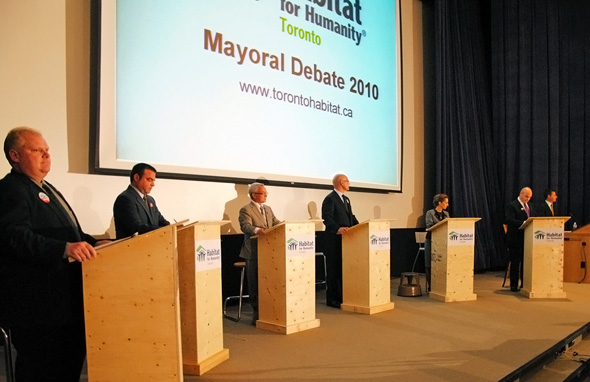 The crowd was packed with supporters from all sides, but Ford, Smitherman and Rossi undoubtedly received the most enthusiastic applause from their fans. Giorgio Mammoliti and Pantalone, on the other hand, had trouble getting the crowd excited.

Smitherman made a point to position himself to the left of Rossi and Ford, saying, "They're peas in the same pod," when it comes to thinking that business is always the answer. Rossi focused his attacks on Smitherman, and, along with Pantalone, charged Smitherman with losing a billion dollars at eHealth.

Pantalone linked housing issues to transit, while Sarah Thomson said she wants partnerships with organizations like Habitat for Humanity to build housing at lower costs. Ford said that money lost to waste could be used to subsidize housing for private homes, and expressed his desire to clean up neglected social housing units.

Rossi suggested economic growth as a solution to housing problems, and said that he wants services placed near public housing to provide education, immigration resources, and language skills.

Smitherman spoke of a bigger role for government. "It must come as cold comfort to those who are on a social housing waiting list to know that the only option for them is extraordinary economic growth," he said to Rossi. He cited the Regent Park revitalization program as an example of how government can improve the housing situation. 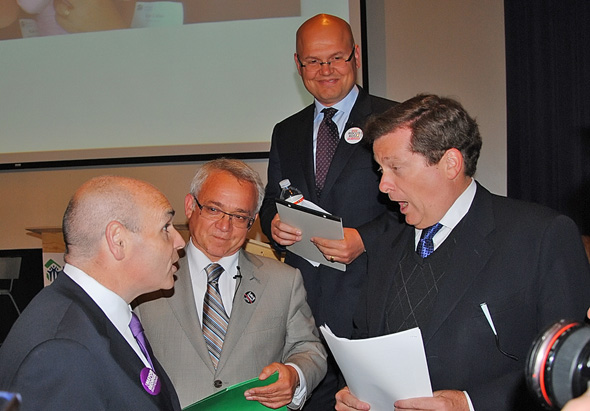 Coincidentally, one of the randomly chosen audience questions went to Chris Tindal, a candidate for city council Ward 27 Toronto-Centre Rosedale. His question, which sounded more like a campaign speech, was about what each candidate will do to bring substantive policy issues to the forefront of the race.

Later, John Camilleri, VP CUPE Local One-Toronto Hydro, was chosen to ask a question, also apparently at random. The audience got rowdy and shouted "setup!" when he brought up Rossi's plan to sell Toronto Hydro.

"You've got an agenda, buddy," someone said angrily. Camilleri shot back: "Have some respect!" He went on to ask about the sell-off of the agency, which forced Rossi to defend his plan to sell it.

Another testy moment came when Ford mentioned driving to get to the debate. He was interrupted by Smitherman, who said, "Whoa! We're on a subway line." The audience was regularly reminded of that anyway, as the auditorium, partially underground, vibrated every time a train whizzed by on the Bloor subway line.

There were no clear winners but Smitherman, Rossi, and Ford had the most commanding presence. Ford, as always, used a populist tone, while Rossi presented himself as an effective manager. And while Smitherman tried to stay neutral on many issues, his eloquence and public speaking skills gave him an image of confidence and competence.

Substantive policy did not dominate the debate, and Tindal was surely onto something with his question. With so many debates leading up to the election, these events tend to feature similar refrains and accusations. But the personal jabs and fiery speeches are what make campaigns exciting. For better or worse, few people would pay attention if the debate was focused solely on a technical discussion of inclusionary zoning.

Writing and photography by Tomasz Bugajski.