Despite being led by six candidates, Toronto's mayoral race has 25 total participants, the majority of whom are unknown to the average citizen. In fact, it doesn't take much to run for mayor: the only requirements you need to fulfill are being a resident of Toronto, over 18 years old, a Canadian citizen and an ability to pay the $200 registration fee.

The race is thus full of characters, from Joseph Pampena, a blind PR agent with a "vision" for the city, to Andrew Barton, a twenty-seven year old "scientifictionist, photographic dabbler, and transit nerd."

But three candidates in particular stood out to me when I turned my attention to the margins of the race: Kevin Clarke, a homeless man with a penchant for public outbursts, Don Andrews, a self-described racist, and Douglas Campbell, a far-left activist who thinks Dalton McGuinty is involved in an international conspiracy with the Catholic Church.

I decided to meet with each of them to find out about their platforms and to explore this fringe element of the democratic process. 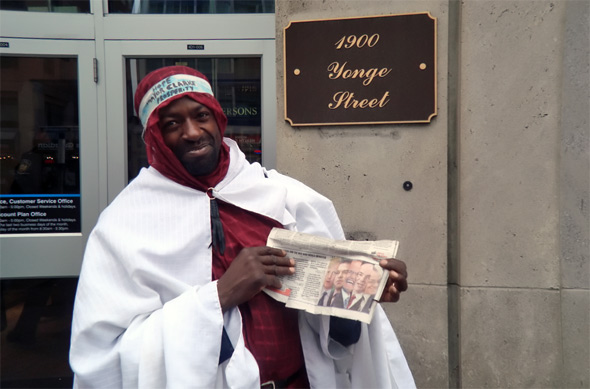 I found Kevin Clarke outside TTC headquarters at Davisville Station at what was supposed to be a protest against Adam Giambrone. He was at the reception desk wearing garments wrapped around him like a Middle Eastern thawb. I was, as it turned out, the only one to show up to his protest.

"I learned this from when I slept outside," he explained when I asked about his outfit. "The city would always come and take away my blankets. So I would wrap them over my head and hold them tight, and this is what came out."

Clarke is homeless, but spends most of his nights at the Good Sheppard Ministry on Queen Street. He told me that his main goal would be to end poverty if he were elected. He also wants to increase housing programs, add bike lanes and end police abuse.

As we stood waiting for people to show up to his news conference, he said that "to solve the social decay in this city it's not about your educational background, it's about your experience." He was, I assume, referring to his time on the street.

He's also clean. About two years ago, when he was made a godfather of a close friend's child, he stopped using drugs.

After the protest, he changed out of his garments and, without warning, began to yell at random people on the street. He called them "racists," "rednecks," and shouted: "To be mayor of Toronto you need to face me!" At one point he walked into the middle of the intersection and blocked traffic.

The intriguing (and slightly confusing) thing about this outburst was that Clarke didn't appear to be "crazy." Not only was he lucid when I spoke to him, I got the distinct sense that he made the scene to get attention, to put on a show. Indeed, my impression of Clarke was that he was a thoughtful and strategic guy.

Since our meeting, he's dropped out of the race. In an email, he said he was unfairly arrested at the first mayoral debate in Scarborough, and due to the "silence," he's been forced to withdraw. I'm not really sure what he means.

With Clarke out, the race has lost one of its most sensational candidates. He's a great example of the fact that (almost) anyone can run for mayor. 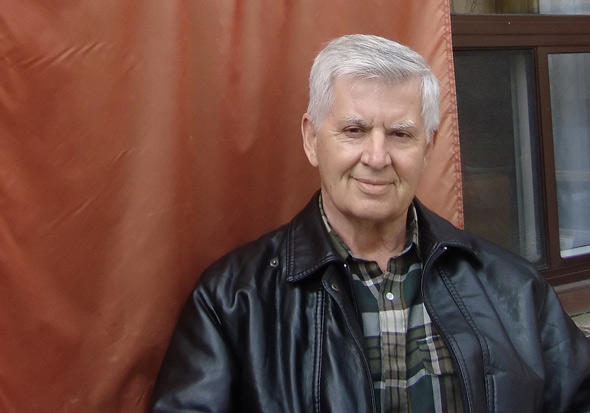 Don Andrews (warning: link may be offensive) is the founder of the Nationalist Party of Canada. He's a perennial candidate for mayor, and in the mid-1970s was jailed under Canada's hate laws.

My friend and I met him at his home. It was nice place around the Beach, and full of paintings (one was by a member of the Romanovs, he said.) There was also a Swastika and a painting of SS soldiers on his wall. His teenage daughter was there too--a polite and kind looking girl.

"I'm running to give the white people an opportunity to express their views," he told me. The media "is always trying to shut you out; it's run by the Jews of course."

I asked him whether he considers himself a Nazi, and he told me he's a racist first. "Call me what you want, just not late for dinner," he joked.

Andrews insisted he doesn't hate other ethnic groups, and said that "racism is for everyone." He expects people of different ethnicities to stay together. "It's about a sense of belonging," he concluded.

Andrews is an immigrant himself. He was born in modern day Serbia, and came here after the Second World War. He was separated from his parents as a child, but the Red Cross reunited him with his mother, who had immigrated to Canada.

"I came here kicking and screaming," he reminisced. "I'm not one of those economic refugees, or criminal runaways."

In 1974, Andrews placed a distant second to David Crombie in the mayor's race. However, election laws at the time allowed the runner up to take over in case the mayor's position became vacant. To prevent someone like Andrews from ever doing so, City Hall changed that rule after the election.

During our meeting, Andrews talked enthusiastically about his five-point plan for Toronto. He wants $20 billion from the federal government for "Toronto's recovery from federally-sponsored immigration invasion policies," to re-establish racial profiling, to begin a tree planting campaign, to eradicate graffiti, and to start a European Heritage Week.

Before we left, my friend asked him what he likes about Toronto, he told us: "I get teary-eyed when I think about the city. It's beautiful; I've never seen a city with so many ravines, so much greenery, and so many parks."

I was surprised when I heard this. Toronto is one of the most multicultural cities in the world, and yet Andrews seems to love it. Go figure. 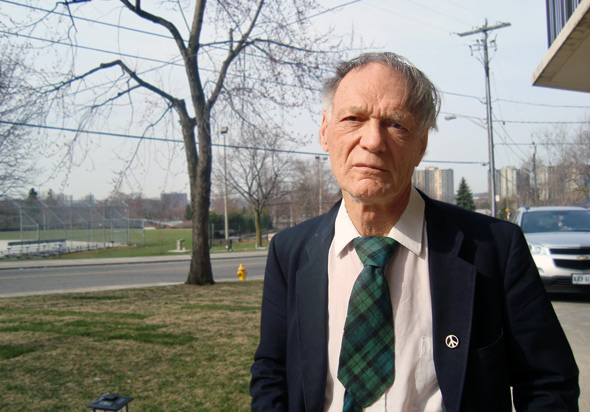 Douglas Campbell is a former school teacher and an old school left-wing activist. He was born in 1930, and he's been "in politics" for decades.

When we met, we talked about his background in political activism. He said that after the war, "Harry S. Truman, that lunatic-Jewish president, ordered the end of the Canadian Merchant Marine. And 12,000 sea men, overnight, became unemployed."

Campbell was one of those men, and became the Secretary of the Union of Unemployed Workers, which he said was a leftover of the Canadian Seamen's Union. He then took an active part in protests, demanding more recognition for veterans. Since then, Campbell has unsuccessfully run for the Ontario NDP leadership and for mayor several times.

I asked him about his rivals in this race, and he told me George Smitherman was as a tool of the provincial Liberals. "McGuinty is a Roman Catholic Premier, and therefore he takes his orders from wherever God is," he said. He told me that McGuinty and Smitherman were under the control of arms producers, and that Smitherman was a puppet of the Pope.

I had trouble getting him to describe a coherent platform. He told me vaguely that he supported "university for all, and public ownership." When I asked him about transportation, all he said was that "it's a good idea." He did say he wants to fix the budget by cutting public executive salaries, but had nothing to say about crime.

Campbell has a girlfriend, Anna Kurtinis, a retired woman who he met recently while canvassing for mayor. She's a pleasant woman who sat through our interview and who shares most of her partner's opinions.

Speaking to these three fringe candidates helped me to appreciate democracy. People often take it for granted that the democratic process is radically open, and I always hear talk about the horrible state of our democracy or about voter apathy, but it's fascinating to see the people who exist on the periphery, outside of the popular discussion.

These candidates will grab a few hundred votes at most, and the major players, like Rocco Rossi and George Smitherman, will continue to dominate the race. I got the sense, however, that all of the peripheral contestants I met simply enjoy being at the head of a movement -- even if only a few dozen people are listening.

Clarke, Andrews, and Campbell have all run and lost before, and they must expect their chances of winning are close to zero. If it weren't for the sense of mission they get from their candidacy, they probably wouldn't have any other reason to run.

Many other mayoral races have their share of fringe candidates too; Toronto's election is not unique in this sense. And as long as you have open elections, we're bound to keep seeing such characters.

Writing and photograph of Kevin Clarke by Tomasz Bugajski. Photos of Don Andrews and Douglas Campbell by Amy Stupavsky.