There are countless abandoned bikes in the city of Toronto. Some are left and remain forgotten for months or longer, rusting and decaying - locked to trees, fences, utility poles, and bike racks. Often they're picked apart by resourceful others, who find purpose for the odd pedal, seat, or wheel. And then what? Apparently getting rid of the remnants is as easy as 3-1-1, or, in some cases, bylaw officers on patrol identify, tag, and later have them removed and/or impounded.

But what happens if City staff make a mistake and remove a bike that's not abandoned?

Back on April 1st, I returned to my locked bike to find a Notice from the City's Transportation Services Right of Way Management, instructing me to remove my bike from a City-provided post and ring outside my workplace. The Notice stated that if I didn't remove my bike immediately, it would be removed by the City at my expense. I phoned the bylaw officer listed on the notice to inquire about this.

He said that because my chain is rusted, the bike looks abandoned. I told him that it was not abandoned and that I ride it to and from work everyday, but he didn't seem to believe me, suggesting that he could tell if it was abandoned or not by the rust on the inside part of the chain (I later looked at and found that there wasn't much rust on the inner part of the chain at all; it was mostly on the outer part).

He then said I needed to use a different ring everyday. I didn't take this to mean I could never use the same ring again... so, yesterday, I used that same ring I used back on April 1st. By the end of my work day, my reliable little Norco had been removed by the City, and I, helmet in hand, had to make my way to the subway rather than riding home.

This morning I again spoke to the bylaw officer and he said I that I shouldn't have parked it in the same place. This afternoon I spoke to the Supervisor of bike collections, from whom I was supposed to be able to retrieve my bike, and he said that he's "gotta dig it up" and see if they have it (at the Yonge St. Yard).

Needless to say, this is rather frustrating. We need a bike-friendly city, not one where I have to jump through hoops (or post and rings, as the case may be) to cycle to work. 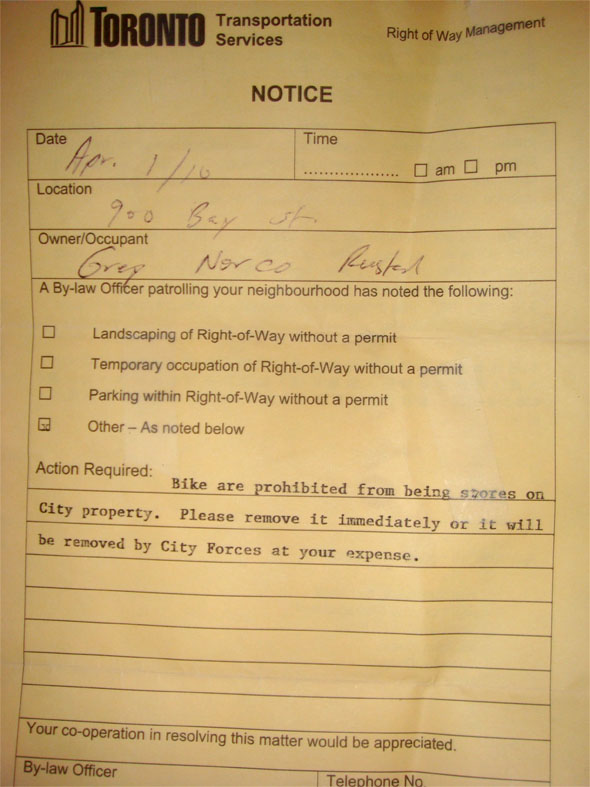 So there you have it. A lesson learned the hard way, I suppose. Mistakes do happen. If you get a written notice from the City about your bike being "stored," try not to park your ride close to where the notice was initially given, or you risk having to go on a bit of a time-sucking hunt to retrieve it.

Oh, and keeping a well-oiled chain will benefit you two-fold; it'll make pedaling easier and it'll decrease the likelihood of your ride being mistaken for abandoned or turned into street art.