The future remains a long way away at the Port Lands

I have a souvenir book published in 1959, on the occasion of the city's 125th anniversary. Nathan Phillips -- he of the square -- was mayor, TV featured stars like Juliette and Robert Goulet, and the city's port, profiled in a chapter all its own, was considered a vital part of its lifeline to the world. Of course, when they talked about the port, they were talking mostly about what we call Harbourfront today, and what the map now calls the Port Lands was a "broad, unoccupied beach area" to the east, held in reserve for future expansion.

Fifty years later, that prospective port's heyday has already come and gone, or so it would seem if you take a walk along Cherry Street and along streets like Villiers and Commissioners and Unwin Avenue, which might seem cheerier at any other time but an overcast weekday in March, though it's hard to imagine how.

There's a lot of activity going on just north, where the Don Lands are being prepared for development, but once you cross the Keating Channel and head east, you're in a world of aggregate silos, mountains of salt under black plastic tarps, and metal recyclers, which punctuate fenced-off, empty fields. 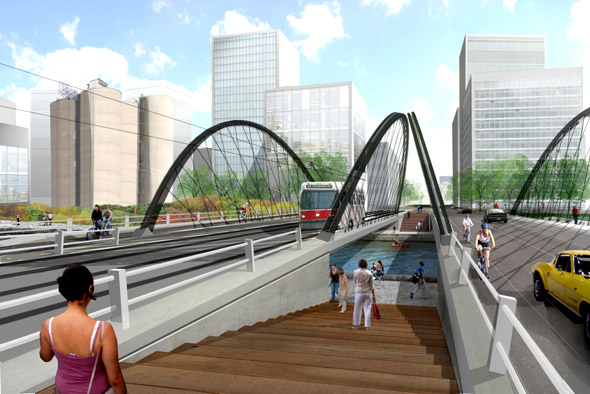 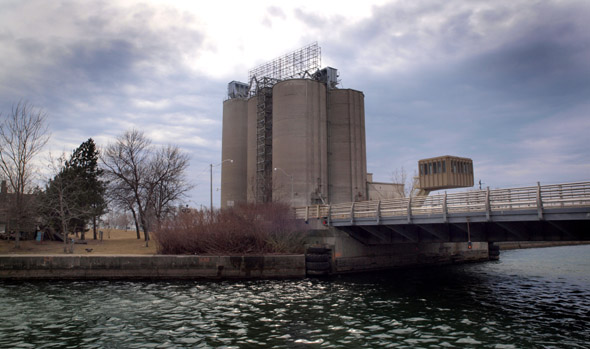 Waterfront Toronto CEO John Campbell says that it'll probably stay that way for at least another fifteen years. His organization, tasked with the redevelopment of huge swaths of lakeside land either owned by the city or passed on to it by the feds and the province, has an impressive set of conceptual drawings imagining the Port Lands in the future. There are park lands with bike paths and boardwalks, quayside shopping strips and streetcar tracks rolling over paths of grass, not to mention innumerable condo and office towers where the rusty tanks and gravel mountains are today. 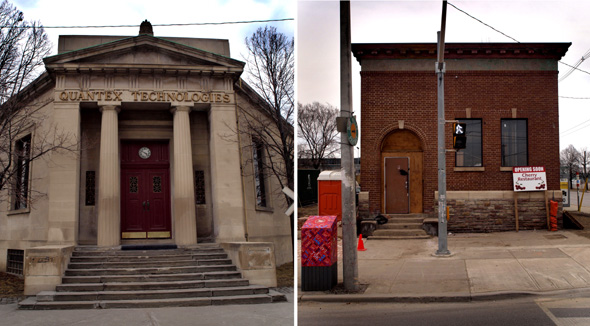 There are fascinating signs of former prosperity in the Port Lands, like the impressive neoclassical bank building at Villiers and Cherry just across from the Keating Channel Pub, now occupied by Quantex Technologies, an environmental remediation company. A block down Cherry there's another former bank building -- barely discernible as the onetime home of a Dominion Bank branch -- being renovated for the new Cherry Restaurant, just across the street from the driving range and go-kart track at Polson Pier, and a boneyard of yachts and sailboats shrinkwrapped in white plastic.

John Campbell says that the tenants at Polson Pier have an 80-year lease on their property, but that those in other parts of the Port Lands will probably be on shorter leases as development plans become more concrete, with the land just south of Keating Channel being the first priority, and two further lots further along Commissioners likely to get progressively longer lease deadlines as renewal moves eastward. 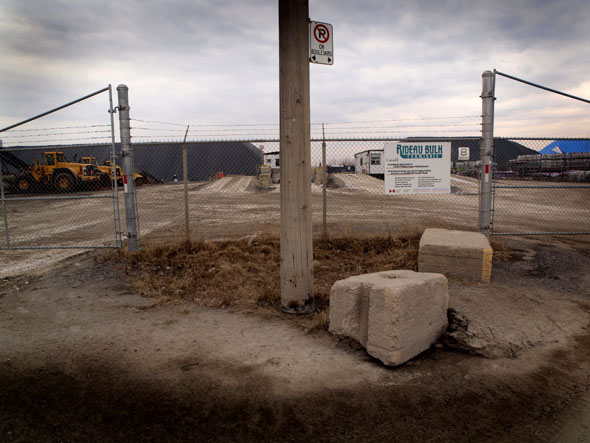 The problem, he tells me, is that land in Toronto is still relatively cheap compared to cities like Vancouver, and that managing its value is a waiting game -- there's no point trying to begin infrastructure improvements like soil remediation or re-grading of the roads until it's worthwhile. But what of the port itself, now mostly located between Cherry Beach and the Ship Channel, where rusting hulks of lakeboats like the Canadian Miner and another ship, chopped in half but still floating, sit forgotten? 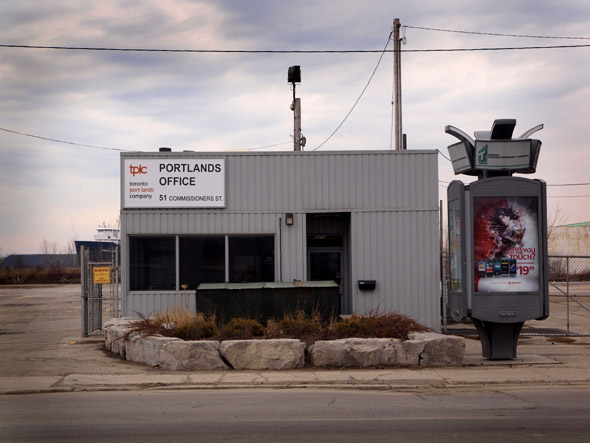 Waterfront Toronto's sketches of the future Port Lands don't feature a lot of big boats, but Campbell says that the worst city shorelines are ones that feature nothing but forests of condo towers, and the city has always imagined the presence of a working port to keep the lakefront vital, though it's hard to imagine tractor trailers plying the leafy boulevards in the architect's renderings.

"With issues of sustainability we won't be seeing cargo arriving in the bellies of 747s as much," Campbell tells me. "If anything I can imagine the port seeing much more traffic in the future." It's an intriguing possibility, but it might be that, fifty years ago or now, Toronto is having a hard time letting go of its image of itself as a port town.