Mayor David Miller and Premier Dalton McGuinty have been sparring over the issue of making the TTC an essential service. While McGuinty welcomes the idea, encourages public debate, and thinks it's a hinge issue for the mayoral candidates to take on in their campaigns leading up to the fall election, Miller has made it quite clear that the Premier shouldn't be meddling in municipal election affairs. Maybe Miller should propose a Mixed Martial Arts match to settle two issues at once.

The Ontario Lottery and Gaming corporation is considering joining the online gambling fray. Other provinces are doing it, and making money from it (heck, British Columbia is even being "responsible" and imposing a maximum of $10,000 in play per week per player). Shortfalls in OLG revenues due to heightened border security and decreases in US visitors at our casinos are part of the problem, but I can see online gambling introducing new problems. Imagine being able to click your money away without even having to leave your bed? Or the challenges in keeping underage players out?

When the HST is introduced on July 1st, merging provincial and federal taxes, some goods and services are going to become more expensive, including gasoline (avoid the pumps on June 30th, folks). And the NDP has acquired numbers under a freedom of information act request, and has accused the finance ministry of being are aware of (and hiding) an average $225 increase in home energy costs (hydro + gas) as well.

Another service that will see HST-related price hikes? (Oh, Toronto Sun... you're so predictable) Boob jobs and face lifts.

Captain John's, the kitschy, touristic floating seafood restaurant at Yonge & Queen's Quay has been up for sale for a few months now, and the owner has been forced to lower the asking price from $1.5m to $1.1m to try to get buyers biting. Maybe the idea of converting it into a floating hotel or casino isn't one that has traction. Any other ideas for converting the ship into something viable?

And on a smile-worthy note, a short-lived but heart-warming snow art project in High Park was discovered by blogTO reader Hamish Grant yesterday. But as quickly as it came, it likely went - and it probably isn't much more than a puddle now. 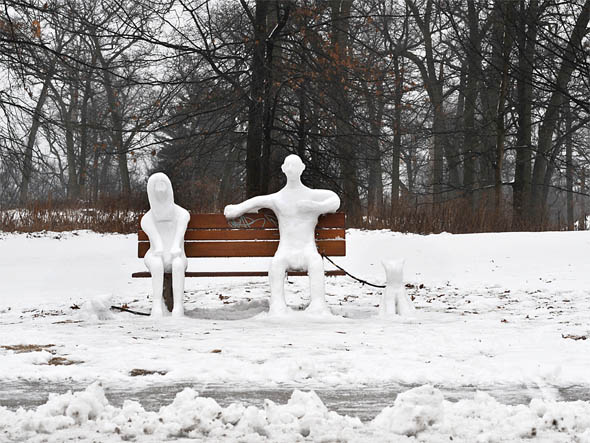