Hockey Players vs. The City of Toronto

While it's tempting to dismiss the ongoing dispute over city ice rinks as a symptom of citywide midwinter cabin fever, there's a lot more going on beneath the complaint launched by the Leaside Girls Hockey Association against North Toronto Memorial Arena in December, alleging discrimination in their denied attempt to get ice time.

What was unusual up front was the obvious commitment the mayor demonstrated over the issue of equitable distribution of ice time, and the rapidness with which he urged council and city bureaucracy to move on finding a solution - one that would inevitably see city administration folding the running of the eight community-run rinks into the 40 they already oversee. For anyone with a skate on the ice, however, it was a scenario that galvanized them into action.

Mark Evans is a patron of the William H. Bolton Arena in the north Annex, one of the eight community run rinks affected by Miller's crusade. (The other seven, for the record, are Larry Grossman - aka Forest Hill Arena, Leaside Memorial, North Toronto Memorial, McCormick, Moss Park, Ted Reeves and George Bell.) Evans, a social networking and marketing consultant, helped start a petition and a Facebook page to organize Bolton regulars, in the hopes of influencing city policy.

The whole battle began with an article in the Star by sports writer Mary Ormsby, who neglected to disclose that her daughter played in the Leaside girls' league. Peter Kuitenbrouwer of the National Post devoted himself to the story for several weeks, while Ormsby's piece led to a cutting response by Christie Blatchford in the Globe & Mail, where Blatchford admitted her own conflicts of interest, prime among which was that her late father ran North Toronto Memorial for several years.

Blatchford also revealed that two of the mayor's top advisors had Leaside connections, and that one - senior economic advisor Nick Lewis - coached a team in the Leaside girls' league that had threatened a Human Rights Commission complaint. As Blatchford memorably noted, "Ice time properly is an unofficial Canadian right; convenient ice time is not." 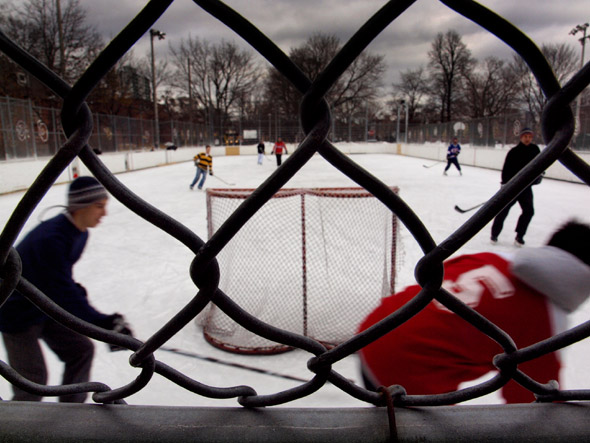 Evans points out that the Leaside league could have found plenty of prime ice time if they'd been willing to travel to Scarborough, "where hockey is in decline because of the different demographic community there," though it doesn't take much to infer the spectre of class prerogatives coming into play when you ponder this scenario. He also stresses that the community-run rinks - many of which were built with donations - all turn a profit, and that they can allocate ice time to suit a community's needs more efficiently than a centralized bureaucracy.

Behind it all, Evans points out that there's a larger agenda at play, as the city is also intent on taking over open-air rinks like the one in Dufferin Grove Park, a hugely popular and successful program run by volunteers and a community organized by the formidable Jutta Mason. "If you talk to people from Dufferin Grove," Evans says, "they'll tell you that the city doesn't like the fact that they do skate rentals and serve hot food made by volunteers and have campfires, because those services aren't available at the other outdoor rinks and they don't think that's equitable." To make their point, they recently moved Dufferin Grove's rink manager to City Hall, where he was put in charge of the cleaning staff.

"It's one of these things where they've got bigger fish to fry, rather than trying to fix something that ain't broken," Evans tells me. "My contention is that with the community boards at the community rinks - they should try to extend them all. It's a better model."