It's been nearly five years since St. Clair West became a construction site, but the city's Christmas present to the neighbourhood and its businesses is imminent - the opening of the LRT line from Bathurst to Lansdowne.

Streetcars are scheduled to start running again on the 20th, but anyone walking the street next weekend will see a pair of vintage PCC cars on the tracks, part of a low-key promotion organized by the TTC and the local BIA, which has suffered mightily since they started tearing up the tracks back in 2005.

Councillor Joe Mihevc was a proponent of the plan - unlike his city hall colleague further west, Cesar Palacio, who opposed the LRT from the beginning. He is, needless to say, happy to see the stretch of the line that runs through his riding back in service, though he admits that some hard lessons were learned along the way.

The first was that the city needed to do all its prep work ahead of time; the years-long delays in construction happened, he says, because the initial project - the streetcar right-of-way, along with upgrades to the roadwork and sidewalks - were complicated in turn by work on gas lines, water lines and hydro, either on sections or the whole of the line, each new addition to the project adding a year to the timeline, and complicating engineering in turn.

"The second thing we learned is... how to put this... engineers are not the best communicators," Mihevc says. "And so you really need to have a team of people who are the face of the project for the community, who are on site and talking to businesses and residents on a daily basis and have the pulse of the construction. We've learned from that, as has the TTC, and now there's a team of people who are going to be doing the communicating for the rest of Transit City." 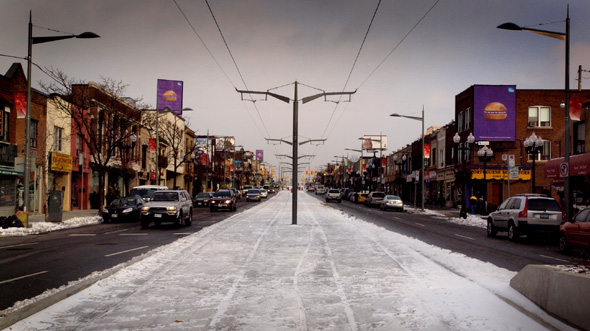 Joe Cipriani is the acting supervisor of streetcars for the TTC, and outlines the timeline for the next week and a half as they prepare to get the rails along St. Clair running again. Sometime around the 14th, the first of a series of test cars will head out west from Bathurst. "We'll take it through slowly then take it up to normal operating speed to make sure all the clearances are right and the ride feels like it should. That the passenger platforms are lining up where they should be, and that anything that may be out of alignment is addressed before we open to the public." 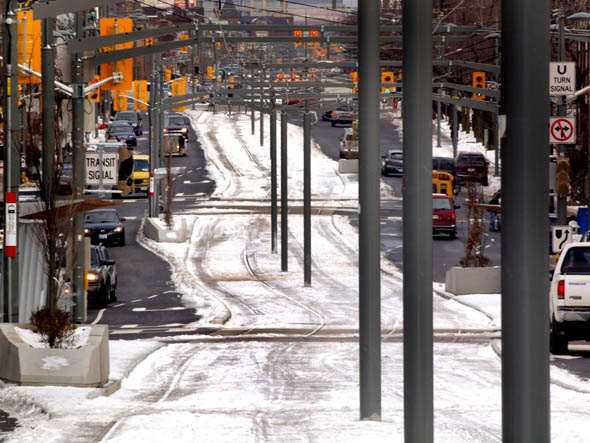 Last week, a spat erupted between former TTC chair Howard Moscoe and his successor, Adam Giambrone, over stretches of the new line that Moscoe alleges were too full of curves and twists to run the cars at optimum speed, which was illustrated by a photo of the right-of-way east of Dufferin. It's an illusion, Cipriani explains, accentuated by the use of a telephoto lens that squeezes the perspective of the tracks sharply.

"Someone here analyzed it, Cipriani says. "By zooming in it actually augmented the curvature, made it look more abrupt than it is. But if you go east, where we've been running from Yonge to St. Clair West station, it's like that by design - there are curves like that, to accommodate intersection narrowing, things like that. It's there by design - it's not an oversight. The design called for that."

As for the damage done to local businesses during the long construction, Mihevic says he sees signs that the area is already rebounding, based on new and unprecedented requests he's gotten for patio licenses on St. Clair, as well as the sudden interest of developers and the rise in housing prices that made it impossible, for instance, for his own son to afford a house in the neighbourhood. "I acknowledge some folks are angry - it's not the St. Clair they're used to, but people are investing on the street and the areas south of St. Clair. People vote with their feet."