Facing another operating deficit, the TTC has predicted a $100 million shortfall for 2010. Nine city councillors are set to discuss the matter in a meeting now scheduled for Nov. 17. The remaining six-week period would give the commission just enough time to implement a fare hike for the New Year.

For every $0.25 increase in fare, the TTC raises roughly $45 million. TTC Chairman, Councillor Adam Giambrone, says that the current fare of $2.75 won't be increased to four or five dollars because that would "not [be] good for riders". But, I won't be surprised if I find myself throwing a Toonie, Loonie, and maybe even a quarter in the fare box in the near future.

With the TTC's recent problems with finances, it's no wonder rumors of a fare increase are circulating. Hoping to avoid the ridership losses experienced in the 1990s -- when the TTC raised prices and reduced service -- Giambrone has repeatedly stated that he's not prepared to cut service.

I think if Mayor Miller didn't announce a 'price freeze' effective until the end of the year, Toronto would have seen talks of a fare hike much sooner. In retrospect, his announcement actually prepared me for a hike sometime in early 2010 -- saying that user costs won't increase this year, almost definitely means they will the following year.

Interestingly enough, CP24 is premiering a new TV show on Thursday at 8PM entitled On The Rocket. The show will be broadcast live from a moving streetcar where passengers will ask Adam Giambrone questions and chat about transit related issues. Let's just hope for his sake (and ours!) that a fare announcement isn't made tomorrow night.

The TTC has just announced the following proposed fare hikes, to be considered at the November 17th meeting. If these hikes are approved, they will go into effect on Jan 3rd, 2010. 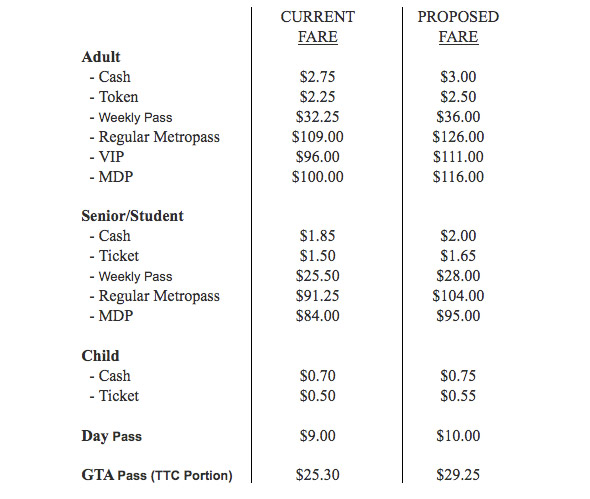 Regular adult cash fare would jump just 9.09%, but the regular adult Metropass will see a significantly greater hike (of 15.6%). Maybe this will help them with their problem of the transferable Metropass being too attractive an option for its own good.