In a move designed to promote further alternatives to car ownership in the city, Toronto City Council has approved a proposal to allow car share vehicles to occupy reserved on-street parking spaces in selected areas throughout the downtown core.

The one-year pilot project, which is part of the Sustainable Transportation Initiative, includes 20 spaces in such areas as King and Yonge and the Entertainment District. Up until now, companies like Autoshare and Zipcar have had to use primarily private parking lots and spaces to store their vehicles. And although these are common throughout Toronto, the ability to utilize street parking will almost certainly increase both the visibility and convenience of car share programs city-wide.

The decision to pilot the program in Toronto comes on the heels of a proposal to build the city's first condominium without permanent parking spaces at the former site of the Royal Canadian Military Institute at Dundas and University streets, and at a time when citizen participation in car sharing is at an all time high. Zipcar's Toronto membership, for instance, has increased almost 40% since last year. And, according to the city of Toronto, between its fleet and that of Autoshare, there are now over 12 000 residents participating in car share services through the use of approximately 600 vehicles throughout the city. 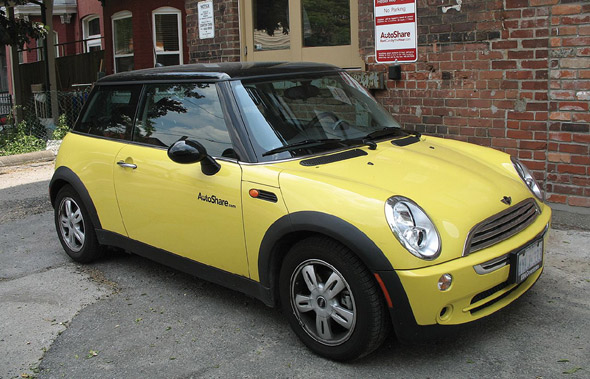 Similar programs have been successful in other cities throughout North America, including Portland, Philadelphia, Seattle, and Washington DC.

Allan Brown, a Zipcar user and downtown resident, welcomes the increased ease that on-street car share spaces will provide. "Car sharing is already quite convenient, but it's a natural progression that such vehicles will now be located on city streets."

Autoshare founder, Kevin McLaughlin, believes that Toronto's willingness to pilot the project "is another example of [the city's] willingness to show leadership in sustainable transportation and carbon reduction." Naturally, Micheal Lende, General Manager for Zipcar Toronto also expressed enthusiasm over the project's approval. "We're thrilled with the leadership the City of Toronto is demonstrating by recognizing the importance of car sharing," he explained shortly after the proposal passed.

According to studies, one car share vehicle reduces approximately ten private cars from the road and can reduce a user's annual driving by as much as 50%.

Lead photo by Tim Shore, second by the robertson building of Flickr.