Immediately upon reading a BREAKING NEWS ALERT from CP24 (delivered to my email inbox with the headline "Swarms of ladybug-like insects descend on Toronto" and a first line that describes how said bugs are "taking over neighbourhoods throughout Toronto"), I just had to pop outside to see just how much carnage the critters were causing.

Despite CP24's alarmist and urgent tone, they're not exactly "taking over" anything. In the north Annex, there are a few here and there but not enough to form any clusters or create any reason for immediate concern. No poison-bombing, vacuuming, or running for the hills... yet.

Let me know if this one below causes any serious trouble or attempts to take anything over, and I'll be sure to turn him in to the authorities: 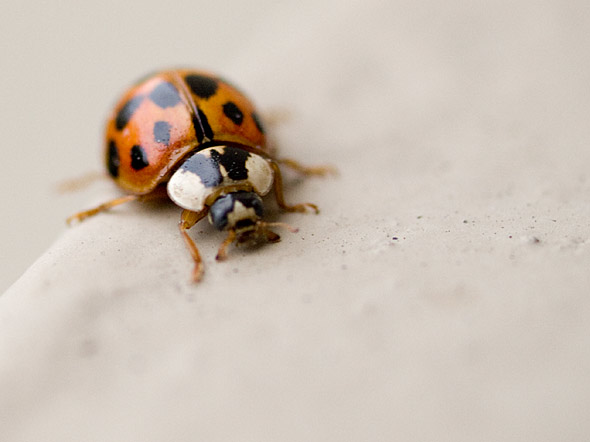 While they do look a lot like ladybugs, these red/orange/yellow spotted insects are not ladybugs. They're Asian Ladybird beetles (aka Harmonia axyridis) and they were introduced to the wild in North America decades ago - to curb booming aphid populations. They do bite humans, although very few people experience anything more than a minor irritation.