TTC to Pull an All-Nighter for Nuit Blanche 2009

The TTC is getting it right for this year's Nuit Blanche. With so much going on in just one night, finding cheap transportation options in previous years has been a challenge, but this year they've really stepped it up.

In previous years, people would buy a day pass to try to cover as much ground as possible. The problem? It expires at 5:30am, so if you plan to travel all night (which many do) one would have to buy two passes. This is why the TTC has made improvements this year in two big ways: by unveiling the 'Nuit Blanche Special Event TTC Day Pass', and by running (much of) the subway system - right through the night!

The pass is valid between the start of TTC service on Saturday, October 3rd, and will expire at 9am the following day. At a price of $9, users will be able to travel with the terms and conditions of a regular day pass: two adults with four children/youths, or an adult with five children/youths.

Subway service on much of (but not all of) the system will run through the entire night. The Bloor-Danforth subway will run between Keele and Woodbine and the Yonge-University-Spadina line between St. Clair West and Eglinton. If you need to go further, you can always grab a blue night bus, which will travel to popular TTC commuter parking lots. In addition to this, the 509 Harbourfront streetcars will also run overnight, moving commuters between Union Station and Liberty Village. 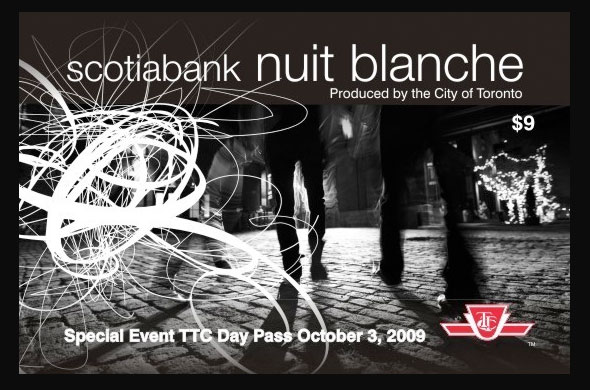 The pass itself has a new face for the one-night event. And I can't help but wonder if this may be the start of the new art styled metropasses that are set to arrive in the next few months. It's refreshing to see the TTC making the point A to B mission much less painful, while at the same time supporting one of the city's most popular events. If this project is successful (which I'm sure it will be), I have a feeling we will be seeing a lot more 'event day pases.'

The all-night festival will transform our downtown core into an outdoor art gallery, with over 130 projects created by almost 500 artists will be on display for citizens and tourists to view and/or interact with. With public transit now a viable option, I might be able to leave my bike at home.