After yesterday's punishing downfalls and as Toronto deals with the throes of another wet and rainy summer season in general, I thought it might be time for a discussion of umbrella etiquette. I'm an umbrella user and fully appreciate the advantages of staying dry; but if people can't learn to handle their bumbershoots, then they deserve no less than a good soaking.

First, just because you decide to bring a golf umbrella everywhere you go, does NOT mean the world disappears once it's out of your field of view. Opening a 6 foot diameter canopy over your head is a sure way to stay dry, while also forcing everyone to cut a wide path around your behemoth. 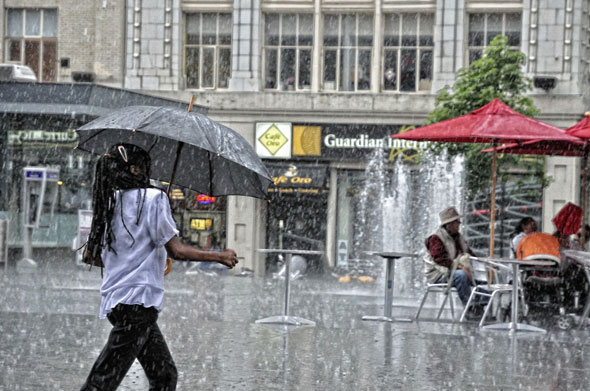 The sidewalk can only handle so many of these inconsiderately sized umbrellas, and already the pedestrian traffic has trouble maneuvering past each other's parasols. Please do everyone a favour and pay attention to where your umbrella is! Hiding underneath it is a good way to avoid the nasty stares of the people you've displaced and while you probably won't poke your eye out, you may skewer a fellow unlucky pedestrian. 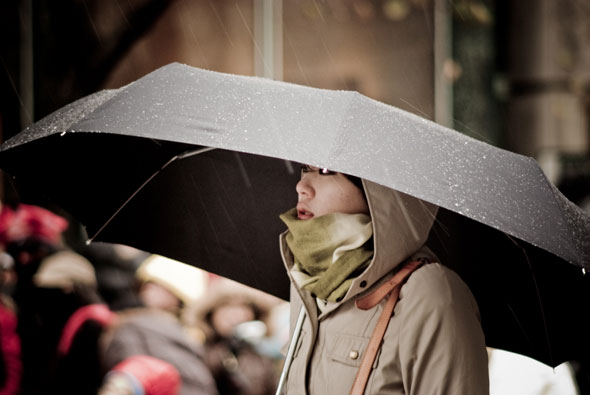 Putting the umbrella down and away should be done BEFORE stepping indoors, whether onto a streetcar or into a store/office. It never ceases to amaze me when someone tries to enter my building with their umbrella still up, as if they'll melt should a drop of water touch them. Equally amazing is the audacity with which these dogs shake off the excess water on to everyone around them, which is always a treat when you've been struggling to stay dry in a downpour.

Secondly, don't be too quick to get that umbrella out; haste makes for some ridiculous umbrella situations, all in the name of saving yourself from a few extra drops of water! The worst case I've seen so far is a woman rushing to jump off a street car and deploying her umbrella prematurely, which left her stuck and struggling to pull an open umbrella through the doors.

Now I'm not trying to pick on umbrella wielding commuters - I'm one of them! - and some of the worst rainy day faux pas aren't being committed by us, but rather by the cars seemingly out to win slpash-points by soaking people struggling to get around on foot. 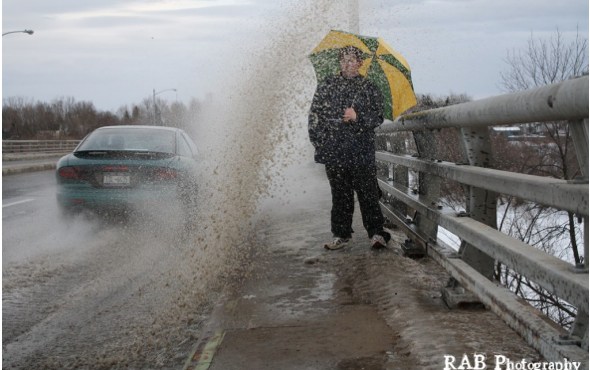 We recently asked followers of our Twitter feed where some of the worst splash traps were... here's a short list of the offending intersections:

@RyanAEnglish: I was splashed under the Dufferin Bridge on Queen and it was intense - lots of street water in my mouth - tasty.

@mjecclestone: In front of the St. Clair station McDonald's. We watched people get soaked from the Second Cup across the street. Sad!

@rubedawg83: Corner of Hillsdale and Yonge!

@katesterface: Queen East near Ontario picks up a massive puddle which is absolutely deadly. Dundas East near Munro just after DVP also bad.

@Rutefoot: Bay and Bloor, hands down.

@lizzabele: Shuter @ Yonge right in front of Frans....I was drenched head to toe!

These splash zones represent perhaps the one and ONLY time that hasty umbrella deployment is allowed, but beware - that water has to go somewhere, and diverting it off your umbrella and onto everyone around you isn't a great way to make friends. Of course you'll have a handy defensive weapon if anyone (like me) objects to your umbrella etiquette.