A local group known as Fuzzy Boundaries is putting a decidedly neighbourhood-oriented spin on that age-old question: what's in a name? And they're betting that the community at large will agree with them that the answer is 'a lot.'

Started by residents of a loosely defined area immediately east of the Junction, the quest is underway to find the perfect moniker for one of Toronto's few remaining neighbourhoods without an official designation. And, for so many reasons, I find the whole process altogether intriguing.

Although Google Maps has the area categorized as 'Silverthorn,' Fuzzy Boundaries members and other area residents know this to be an error (Silverthorn is actually located in and around Eglinton and Keele). A little bit of research reveals that, for lack of a better and more specific name, the area in question is actually known as "Dovercourt-Wallace Emerson-Junction." But, of course, such a title encompasses too many other (already named) neighbourhoods to be of any real use.

Other names that have been bandied about in the past are the 'Wallace Junction' (after the street that runs just south of Dupont) and the overly broad 'West Toronto' (a former railway designation for the area). Obviously neither has stuck, and so the search continues for a name that's both unique and that references some aspect of the area's history or topography (or both).

I've read philosophers and linguistic theorists who claim that a thing without a name is not a thing at all, and I have to think that this is particularly true of neighbourhoods. While a physical area may exist, and while people may live amongst one another, I think the term designates something that's as much psychological as geographic.

And by virtue of this, a name seems to encourage people to willingly embrace a communal identity that goes beyond a set of narrowly defined borders or streets. The best neighbourhoods tend to feature residents who are both proud and protective of their immediate area and its inhabitants. At the risk of redundancy, such residents' behaviour is probably best described as 'neighbourly,' which for me connotes a certain altruistic attitude. 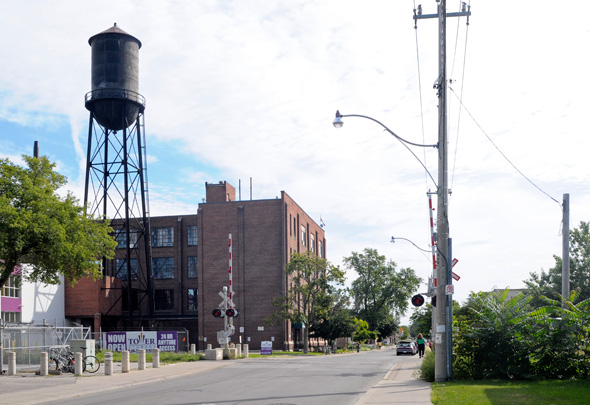 Not to be overly idealistic, certain neighbourhood names can also be confining or reductive, marred by reputations that tend to fix a negative identity upon an area. Without needing to identify such neighbourhoods, it's pretty clear that whether the connotation is good or bad, names are extremely important.

But, of course, most Torontonians live in areas that were named long ago. The opportunity to be a part of the naming process is rare indeed. But that's exactly what Fuzzy Boundaries is encouraging people to do.

Although the process started a while ago, it's actually set to kick into high gear in the next couple of weeks. Starting September 15th, there will be a 120-day period for people to submit and discuss possible names. At the end of that period the suggestions will be tallied and posted on the Fuzzy Boundaries website, at which time there will also be a public meeting to discuss the submissions and a vote on the top ten. Finally, a panel of local residents and designated experts will determine the winner in February.

Have a suggestion for a name? Fire away!