The new-look Roncesvalles Avenue is finally on its way, but from now until January the new look involves only one northbound lane of traffic, jack hammering construction, and general navigation challenges.

The view of Roncesvalles and High Park is already mighty different than it was two months ago, and although the show must go on, it's not clear to me how the Polish Festival is going to work this year.

But the issue right now is getting around the neighbourhood. Most intersections are still open and there are a few sections with parking and two-way traffic still available, but much of Roncesvalles from Dundas to Queen is one lane only and the busy Roncesvalles/High Park/Fermanagh intersection at the midpoint amounts to a big trench at the moment. 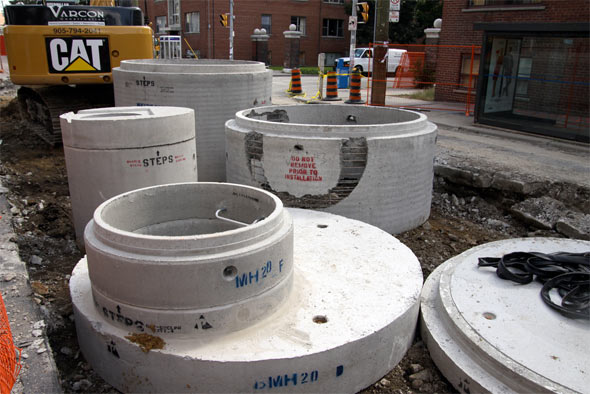 The stated restrictions indicated there would be no parking and only one lane of northbound traffic the whole length of Roncesvalles so the city is either being compassionate to the worried shop owners along the bustling commercial strip, or the strong BIA has pulled some weight to keep as much of the street open as possible as the work crews move northward from their southern and middle starting points.

One inconvenience that has been implemented is no streetcars on Roncesvalles, and they won't be back until late 2010 when the work to replace the tracks is completed. Buses run northbound along Roncesvalles from Queen (The 504 King still operates as a streetcar for the whole route except Roncesvalles), and southbound service is via Dundas, Lansdowne, and Queen Streets. 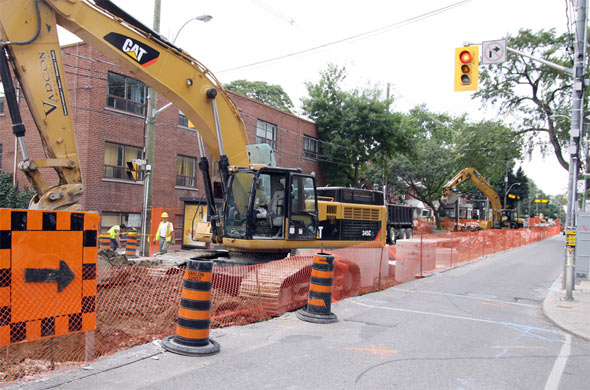 Although the street will reopen to vehicles this winter, it will only be temporary pavement that fills in the trenches after the new utility lines are laid down. That pavement will be ripped up a second time - and similar route disruptions seem inevitable - next summer when the streetcar tracks are replaced, the street is repaved, fancy transit platforms are installed, and the sidewalks take on a whole new look (with an integrated tree canopy if Roncesvalles Renewed gets their way).

When everything is done about a year from now, the street should look pretty sharp, and with accessible platforms built into the design it's expected that Roncesvalles will become a model street city- (and maybe even world-) wide. But until then, it's early morning construction noises, difficult neighbourhood navigation, and a whole lot of crossed fingers that the construction stays on schedule and a full year of major road work doesn't have a negative impact on businesses and residents of this, one of the city's most charming neighbourhoods.