Is the Toronto Garbage Strike a Good Thing?

I'm not generally one to see a silver-lining in all things negative, but as the city's outside workers strike drags on, I've started to see evidence of some good coming out of all this hassle. While I'd certainly be happy if the strike ended tomorrow, the fact that for the last couple of weeks most of us have had to confront the waste we produce strikes me as potentially eye-opening.

Take my residence as an example. A house that's been converted into four apartments, the waste that me and my fellow tenants produce was already pretty obvious as pick up days neared. But now, despite the fact that my landlord has been quite diligent about managing the build up, it's become an ugly and startling sight. And that's not to mention the smell. Do we, I often wonder as I leave the house each day, really produce that much trash?

I'd imagine that those who rely on public removal of their garbage across the city are having similar experiences. It really is no longer possible - at least temporarily - to confine our waste to the category of 'out of sight, out of mind.' Even those who enjoy the current luxury of private waste disposal are still exposed to garbage spilling out of street-side waste bins and at the various temporary dumpsites, which are growing in number by the day. Although the streets have remained surprisingly clean so far, as I was driving along Bloor the other day, the higher levels of litter gave me the odd feeling that I was in New York and not Toronto. 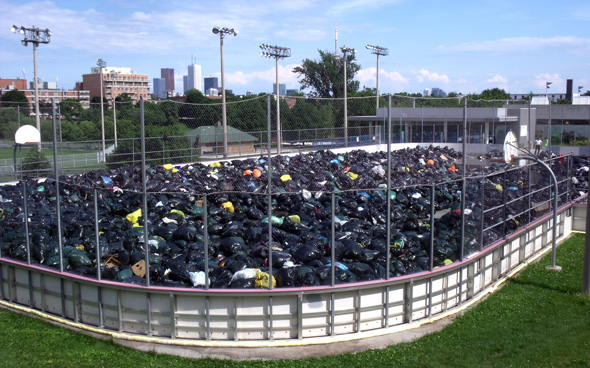 So what's good about all this? Well, for me at least, the very fact that I've had a brief chance to confront the shocking amount of waste I produce has got me thinking much more seriously about how I might now be able to reduce it. But that's really only half of it.

I have little doubt that when this strike finally does end, my newfound enthusiasm will start to fade and old habits will creep back. Although I do fundamentally believe that it's important to confront our waste production, experience tells me that the temporary nature of this strike (even if continues much longer) will ultimately dull its impact.

What I think is far more promising in terms of the future reduction of waste, on the other hand, is the various examples of communities across the city rallying together not only to protect their parks, but also to use them for a greener management of organic waste in the form of compost heaps. Sure, some of these compost programs like the one at the Christie Pits Community Garden are really quite small and pre-date the strike.

And yes, some of the protests could be accused of having elements of the not-in-my-backyard stance about them. But the very fact that the strike seems to have fostered solidarity and the desire to take action within communities struggling against the prospect of their green spaces becoming dumpsites could be an auspicious sign. 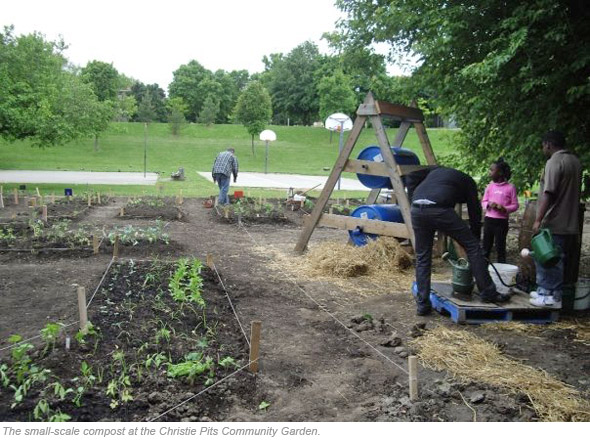 While I was half amused and half annoyed to hear that the Granite Club was offering residential waste disposal services for its members, the local compost started at the Scadding Court Community Centre is precisely the type of strike-related measure that could have had lasting effect. That's why I would go a step further than city Councillor Adam Vaughn, who accuses the Ministry of the Environment of "overreacting" to the site. I would say that the ordered closure of the Scadding compost is completely misguided.

I'm not so na誰ve as to think that every location is suitable for waste storage, and I realize that if not done properly a whole host of problems may ensue, but communities taking the initiative to deal with their own (organic) waste should surely be encouraged and helped to develop feasible systems. And regardless of the makeshift and unregulated nature of these initial actions, I think now is an exceptional time to ensure that such projects take hold over the long term. Waste and waste reduction is, after all, at the forefront of people's minds citywide.

Perhaps this will come off as a bit of idealism, but as easily as the sight of our growing garbage heaps may be forgotten, I tend to believe that the collective measures taken by communities to deal with the problem could persist not only in the participant's memories, but in lasting programs with improvisational and somewhat crude roots.

Lead photo by severes-babylone, second photo by seastarerrin, both members of the blogTO Flickr pool.