If you were lucky enough to have missed the garbage strike in Toronto in 2002 (or any of the subsequent service disruptions since) don't worry - in this city it's becoming a regular tradition.

Only a few short years since the last strike, City workers have again walked off the job, shutting down services like summer camps and swimming pools, and suspending Toronto trash collection. Nothing says summer like a stinking city full of kids on summer vacation with nothing to do. And be prepared; after only one day, Torontonians have already begun to nominate street curbs, alleyways, and even parks as unofficial dumping grounds of choice.

I'm beginning to wonder if we should bother with trash collection at all... why not turn Toronto into one giant refuse pile? :P 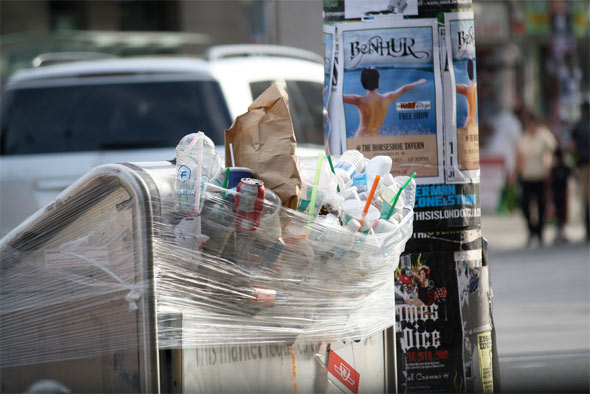 As you can see, the has city has already made some initial efforts to shut down the flow of garbage to public bins. Unfortunately, citizens seem to have snapped under pressure of having to hold onto their refuse for a few days. Within an hour of seeing the nicely plastic-wrapped bins being set up by city workers, I watched a woman claw her way through to throw out a coffee cup. This alone may not have contributed to the stench now coming from the bin, but after a day's worth of garbage cooking at 27oC in an empty bin (particularly all the poop bags from dog walkers) I can only imagine what these will start to smell like by the end of the week.

The bins, I can live with - it's hard to break old habits, and we've been programmed to throw our garbage into city bins as 'good' Torontonians. The public dumping ground on the corner of Christie Pits however, is another matter. Pictured below, this is simply a demonstration of why the union will continue to resort to service interruption as a viable bargaining tactic - it works. 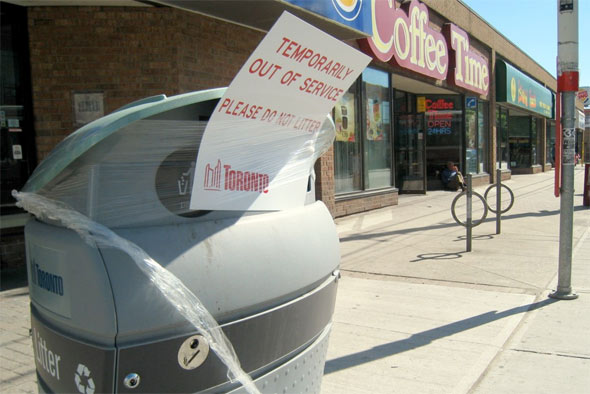 After only a day of being asked to help out by a) holding on to their trash, or b) delivering it to any one of the city's transfer stations, some citizens decided the best idea would be to start dumping trash in parks and alleyways. This may be in part due to idiotic protests at the transfer stations, but was this really the only alternative dumping ground for some people in the city? May I suggest something more appropriate than a park... maybe re-direct your trash-rage towards City Hall or CUPE HQ perhaps? :)

Now I don't for a second expect people to cope with an extended strike - there's a reason the summer of 2002 was such a wretched gag-filled stink fest, it went on for WEEKS! - but if this is the best we can do after one day... we're going to have a fairly fetid start to summer in the city.