The sign at the corner of St. Clair and Bathurst originally said that the roadworks tearing up St. Clair from Vaughan till Oakwood would be completed last fall. Someone tried to cover up the year with gaffer tape, but the point has been made - no one is willing to hazard a guess as to just when the construction of the LRT line will be completed, never mind the road works and water mains improvements the city is undertaking at the same time.

Few projects have inspired more anger and division than the St. Clair LRT, especially now that further rapid transit lines are planned for Eglinton, Finch West and Scarborough, as part of the Transit City master plan. Construction on St. Clair began four years ago, and the completion date has been bumped up twice, though the earliest anyone is willing to hazard a guess at a completion date is next year, but not for the whole line, never mind a projected extension west to Jane Street. 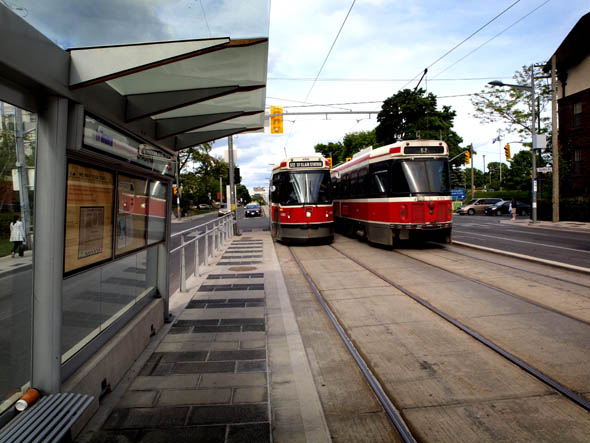 If you want some idea of what it'll look like, the finished line between St. Clair and St. Clair West subway stations is a serene ride, with streetcars gliding on their right-of-way past fine homes and condo construction sites. This stretch of St. Clair is mostly residential, however, and building it wasn't nearly as painful as construction on the long blocks of stores and businesses from Bathurst to Keele. Groups like Save Our St. Clair joined local councillors such as Cesar Palacio in opposing the project, though despite lawsuits and a halt work order in 2005, it went ahead, and St. Clair West has been a traffic nightmare since then, and though they haven't been able to stop construction, local merchants announced this week that they're considering a class action suit against the city to recoup lost income.

The streetcar stop at Bathurst is already looking run down, before a single streetcar has had a chance to use it - the steel wires on the barrier have already been broken, and either sag between their uprights or wrap around them. They were a nice design feature - like the waist-height "bum shelves" built into the stops - but you can't help but wonder how much thought went into their maintenance. 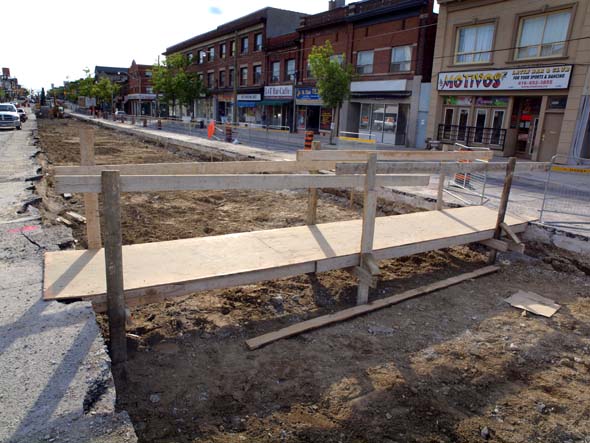 The city has decided to improve road works along the line, with the result that shuttle buses and traffic weave in and out of the LRT right of way along the line until Oakwood, where the right of way is currently a wide gash in the middle of the street. It's always startling to see a busy stretch of city street torn up right down to the earth beneath; you can't help but remember the dirt road that preceded it, or imagine the channel as a riverbed, a fantasy helped by the crude wooden bridge stretching across the hole at Glenholme Avenue - impractical as it might be, I think we all dream of living in Venice.

As predicted, construction has been hell on the street's businesses, and it's hard not to notice the empty storefronts, like La Perla Draperies east of Oakwood, which I remember as a fixture from my daily commutes along St. Clair to high school, over 25 years ago. It's also had the effect of freezing stretches of the street in mid-transition, where the soccer cafes and macellerias coexist with the first wave of a future St. Clair - restaurants like The Rushton and Boom Breakfast, The Cupcakery, Pain Perdu and Boubah's Pet Store, "Specializing in Holistic Pet Supplies." 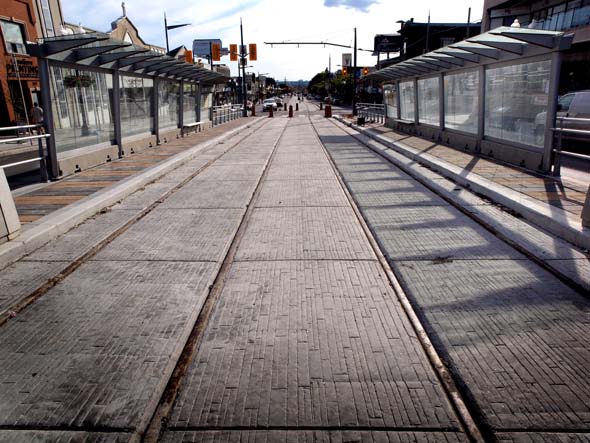 The building site ends at Dufferin, where another completed phase of the LRT sits empty, and it's possible to walk for blocks down the centre of the Corso Italia without worrying about traffic. It's a unique experience, and I'd recommend you try it before the streetcars take it over again - though from all appearances, there's probably no rush. The finished right-of-way ends again just before Caledonia, where the tracks abruptly stop, then start again a few feet away, but mysteriously off centre. Road crews are already starting to tear up the street, and the businesses lining the street up till Old Weston Road are preparing for the worst. 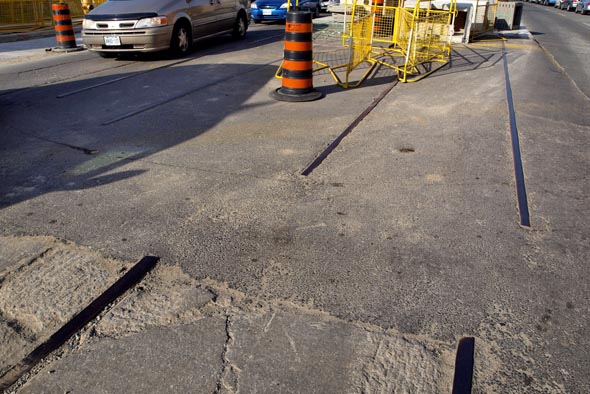 Across from the big box stores on the old stockyard lands by Gunn's Loop, there are rows of new streetcar rails piled up, waiting for the jackhammers and diggers to start work. Back by Oakwood, a construction worker said that they'd have their stretch of track finished by November, but he couldn't say anything about the rest of the line. 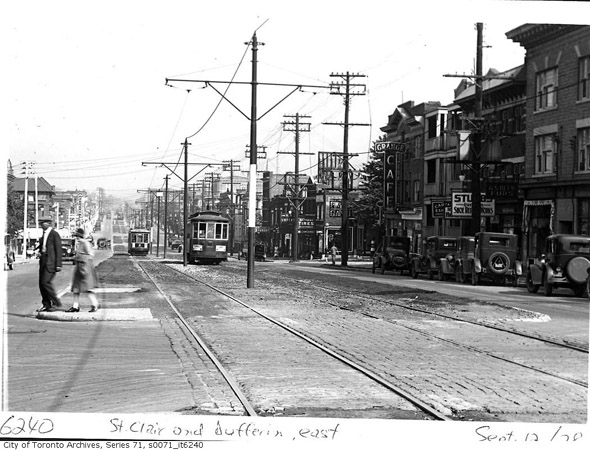 Finally, a dig through the City of Toronto Archives for some context unearths a photo of St. Clair and Dufferin in the last year before the 1929 Stock Market Crash, and reveals the street with a dedicated streetcar right-of-way, photographed by the city just before... 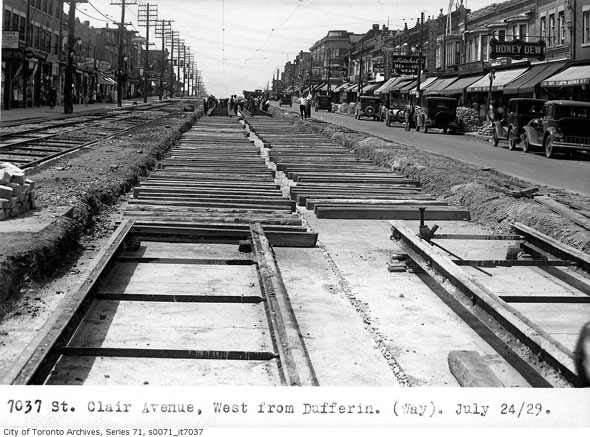 ...it was torn up, a project that took at least three years, judging by the evidence in the archives, merging the streetcar line with the street. It's familiar, and more than a bit ironic, of course, since, for all the talk of speeding - painfully - into the light rail future, it just seems that we're taking an all-stops trip into the past. 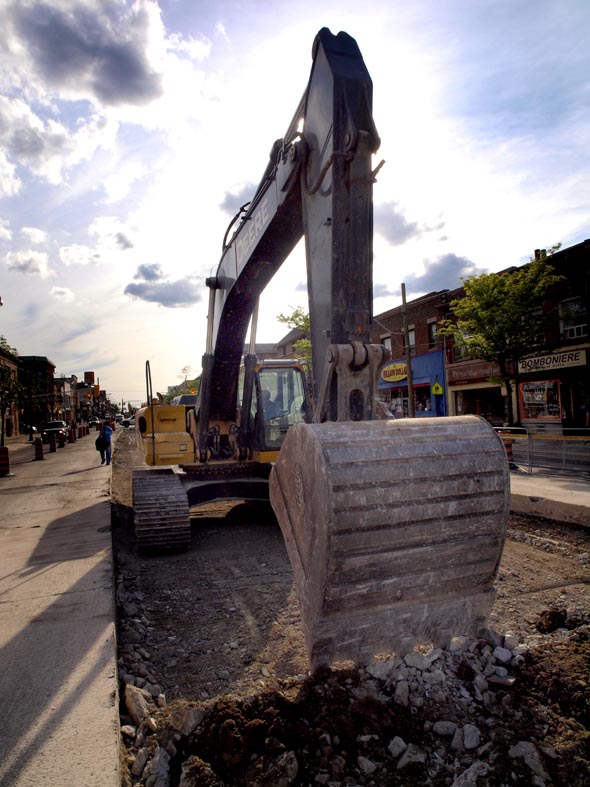 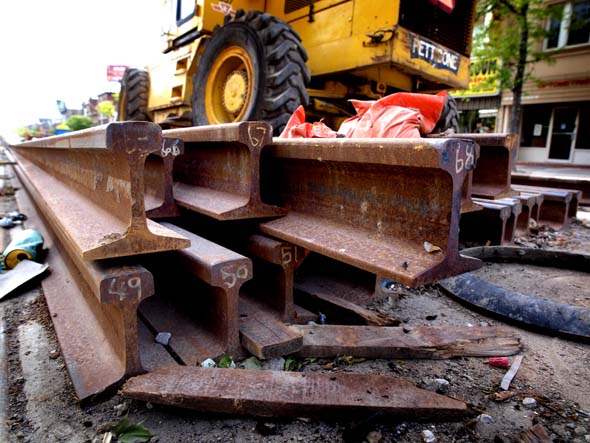 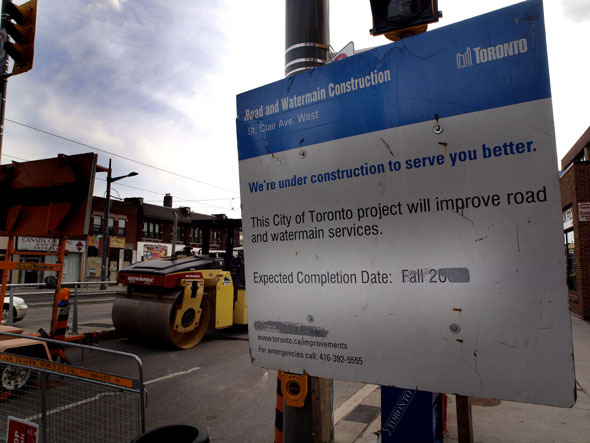