Although there's been no official word, the TTC has found its remodernization project hit the likes of St. Andrew station. Maybe not as grand as Museum station, but it is definitely refreshing to see even subtle improvements to the subway. Keeping with the original 60's colour palette, the station is slowly replacing its small thin panels, for much larger ones. This minor change comes as the Toronto Transit Commission attempts "to revitalize the Bloor-Danforth and the University line stations."

The project was announced nearly two years ago by TTC Chair, Adam Giambrone. I was once under the impression that most of the stations would end up looking like Museum in one way or another. A different motif for each station definitely sounded very appealing. Plus, it would be extremely easy for tourists and citizens alike to navigate... but the project came at a cost. Now, it seems that the focus and funds have shifted to Transit City. 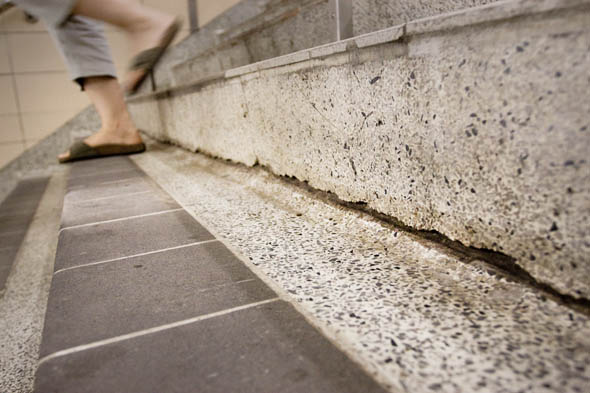 Some stations are scheduled or already in the process of major revitalization. Most of these initiatives attempt to make Toronto's transit more efficient. With years of use, many of the stations are starting to slowly deteriorate. If left unattended, these annoyances will become larger problems down the road. Small stress cracks in stairs may not seem like a big deal now, but in the future it could cause someone serious injury.

Cracks or water damage hinders almost every stop on the Bloor-Danforth & Yonge-University-Spadina lines. On rainy days, puddles can appear on the platform creating hazards for some commuters. The solution usually consists of a mop and the good old wet floor sign, which is merely a band-aid solution. Rarely is the damage quickly fixed, which usually makes problem grow with time. 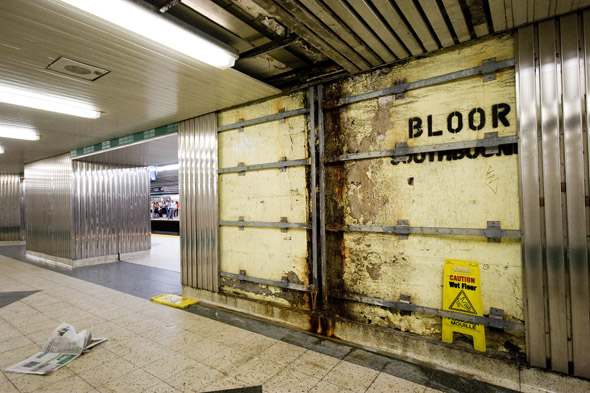 For instance, in Toronto's busiest subway station (Yonge/Dundas), a panel on the Bloor platform has been exposed for months now. During rush hour this station fills to the walls. It's just a matter of time before someone runs towards the train in fear of it departing, only to slip in the puddle. It's okay though, there was a wet surface sign, and you should have probably been more careful.

Ossington doesn't suffer from water damage as Yonge & Dundas does, but it does have problems of its own. Pieces of the roof seem to be missing. It's unclear as to why it is missing, but this is a constant recurrence at many stations. Most of these ceiling holes have been left for years. With time, some worsen (probably due to train vibrations) and others stay about the same size. It's more of an eyesore than anything, but one is left to wonder what risk these missing pieces pose? 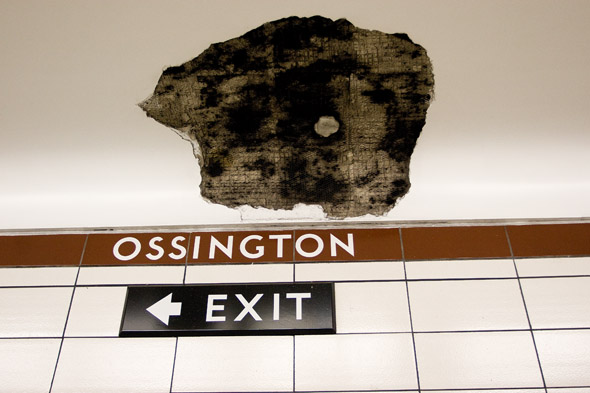 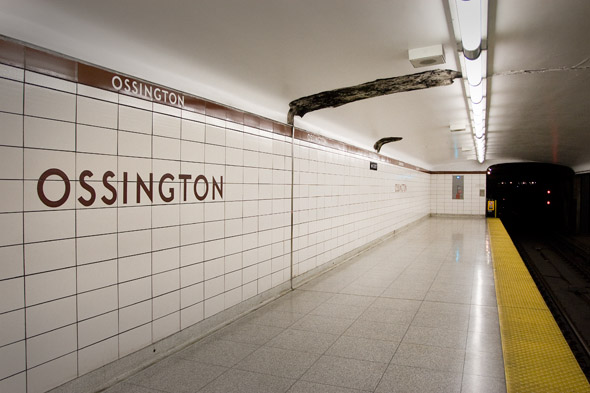 Much of the TTC subway system is in disrepair. That being said, it is good to see that our system is starting to get a bit of an overhaul. St. Andrew is hopefully the first of many more fixes to come. Although the transition period with construction can make things difficult sometimes, in the long run it will be worth it. Not only will the stations be visually appealing, but more importantly, they will be safer.