Who would do this, and why?

Who would do this, and why? An anonymous individual makes a seemingly outlandish claim, warns the public to act, and pleas for help... but leaves no means of contacting them to follow up on any of this. Awkward. Or fishy.

A disgruntled (ex-)employee exacting revenge? An immoral competitor tossing a new low in low blows? A personal vendetta gone public? The unfortunate and seemingly malicious result of someone's mental imbalance? Is this residual fallout in fears over listeria?

This sign has been spotted in the Annex, near Bloor & Bathurst, on hydro poles, newspaper boxes, and mailboxes. And it promptly ended up the blogTO Flickr pool today and in short order was all the Twitter as well... leaving everyone wondering what this was all about.

A phone call I made to the popular Middle-Eastern restaurant at 5:30pm yesterday was answered by an employee and I was passed on to the senior employee present. Upon being notified about the postering (which we can only assume is untrue, and if so, libelous), he sounded surprised and mildly upset by the news. He assured me that no one had died in the restaurant.

This morning, I spoke to the owner, Sam, who expressed shock and disbelief. "We've been a part of this community for 17 years. I have no idea why this is happening," he explained. "I'm shocked. We love the Annex, and through the years have had nothing but rave reviews and happy regulars," he continued. "I can't imagine who would do this."

If I see any of these seemingly libelous posters in my travels in the Annex, or anywhere else in the city, rest assured - I'll be yanking them off. 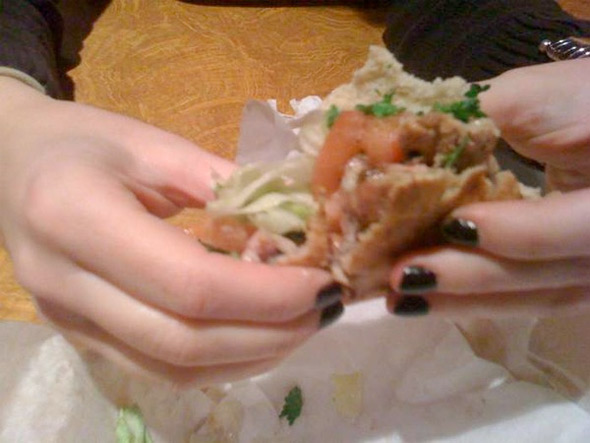 Last night I stopped by the restaurant and Tweeted along with a fuzzy cell phone snap: "Half way through a shawarma at Laila's and my date is still alive":

UPDATE: Sunday, March 15th:
I just got an email from Torontoist editor David Topping, who told me that one of their writers has been working on this story for almost a week. Please see a far more comprehensive look at this issue in Kaori Furue's article on Torontoist.

Photo of poster in the Annex by blainekendall.com. Fuzzy photo of half-eaten shawarma by me.