Opening a cheese shop requires refrigeration, which requires electricity, which requires getting hooked up by Toronto Hydro, which, as it turns out for Michael Simpson of the Leslieville Cheese Market, requires a transformer upgrade. And that means he's on the hook for the $4,000 labour cost of the upgrade while everybody before - and after - pays the $200 connection fee. Plus a 4-6 week delay on top of the 6 week delay incurred when Toronto Hydro decided to check and fix all of its handwell covers (that had the unfortunate habit of electrocuting pets).

So instead of the new cheese shop at Queen and Augusta being open a week ago, Michael Simpson is out $15k and at a clip of $5k/month in rent, the now-optimistic opening date of April 30th is looking more and more expensive.

"I'm just the unlucky sod," Simpson says, "who happened to ask for an upgrade from 200 amps to 400 amps when the transformer was out of capacity." 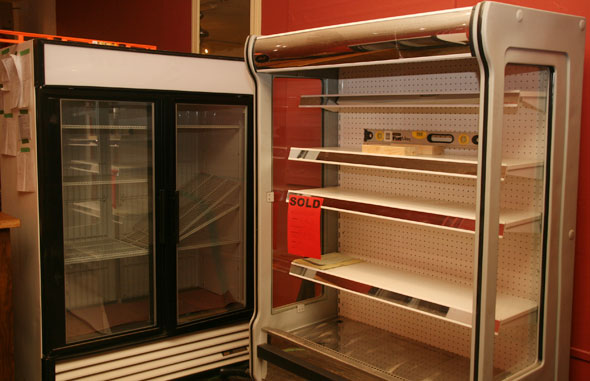 "Just wait until somebody else upgrades," according to Simpson, was the recommendation of a Toronto Hydro planning department employee for how to avoid the upgrade fee. In other words, let somebody else pay for the labour of the upgrade.

For sake of analogy, Simpson compares his plight to that of a customer in a bar who wants a beer, but instead of the normal price of a beer he gets to the bar and finds out they just had to upgrade the tap and so this beer is going to cost $500. But if he waits for somebody else to pay that price, he'll be able to pay regular price afterward.

The system ain't exactly fair to the small business owners out there, but that's the way it works.

Simpson should find out the exact tally for his request tomorrow, when the 4-6 week timeframe will also begin. He's already got his fridges, counters and plan in place. The Healthy Butcher several doors down has already said they're likely to stop selling cheese - and will send customers Simpson's way - so that they can offer fish instead.

So now Simpson waits, and takes his time doing the remaining work. And he enjoys a lot more sleep than he was expecting. But he'd trade that for hurried cleaning and all-nighters if he could be open this week.

UPDATE (9:20am Tuesday, March 17): After speaking with Tanya at Toronto Hydro (I played phone tag with Hydro yesterday) I've learned that the issue is on the property of the cheese shop, not on the property of Toronto Hydro, and that some of the delay is from Michael Simpson's end as he first put in a standard request and now requires the upgraded service. The final fee to Simpson is $3299.37 and covers the labour cost of designing the upgrade and connecting the cheese shop to the Hydro equipment. The total cost of the work is actually $21,500 and will require a 4-6 hour power outage in the area, work that would not have to be done if Simpson's request were a standard one.

In addition, Tanya indicated that while the next customer likely would just pay a couple hundred bucks because most requests are for standard service. But if they also had a non-standard request they may well have to go through the exact same process as Simpson because the reason for Simpson's non-standard request is related to Simpson's building, not Hydro property.