Green. Contemporary. Minimalist. The neighbourhood of the Beach (or Beaches) isn't known for its cutting-edge architecture, but new residents Lee and Angie wanted a modern house. So they decided to go for a major redo of whatever they bought.

"The agent showed us the house next door, and I asked about this one--because I saw the two door garage." It wasn't the parking that interested Lee--as an industrial designer, he wanted to use the garage as a workshop. 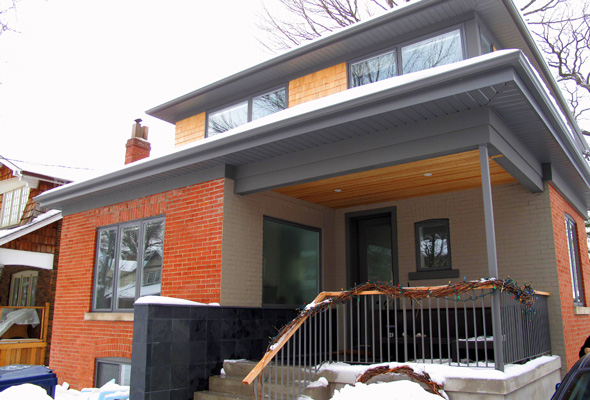 The real estate agent was dubious, but in fact, the small brick bungalow was just what they were looking for. They were already talking with Carolyn Moss of Moss Sund; Terry, whose house was my Habitats feature last week, is Lee's friend and colleague, so Moss was the obvious choice. "Angie and I are both quite modern in our taste," says Lee, "and with our desire to build something sustainable, this was the best option."

"We had been living in a house we gutted and renovated ourselves," explains Angie. "When the kids came along, everything stopped. We said, never again! This time, we want a great architect and a great builder." They bought the house in February 2007 and rented it out while discussing plans with Carolyn Moss. Construction started in September and lasted nine months. 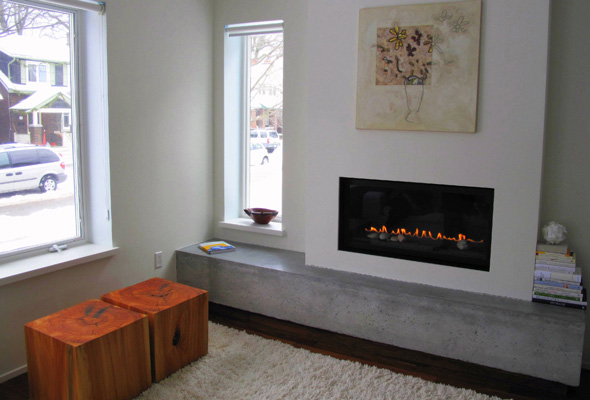 What's fascinating about this house is how radical the inside feels, compared with the more traditional exterior treatment. Angie explains, "We were quite concerned about keeping it fitting to the street, to keep the brick, the cedar shakes, even the footprint. I think people on the street were just delighted we didn't split the lot and build two houses."

The main exterior change is that the bungalow now has a second storey. Inside, the rebuild's most dramatic feature is a slate-covered staircase wall, which rises from the basement through to the upstairs bedrooms. "We had different stair locations," says Carolyn Moss, "then we decided on the slate stairwall, with skylights angled for light, to heat up the wall as a heat sink." The stair's windows and skylights frame a huge 100-year-old white oak in the backyard. 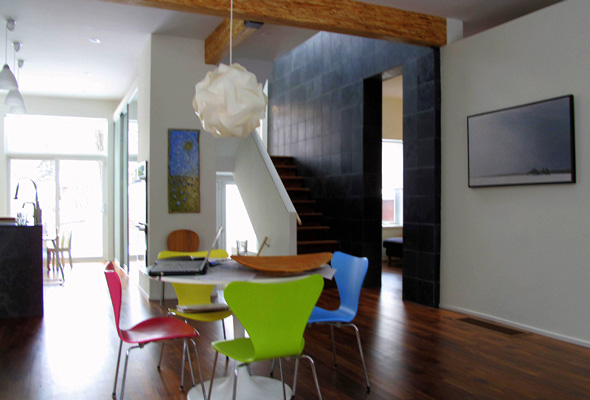 In keeping the original footprint and foundation of the house, the biggest challenge was how to get sunlight into the now-taller house. "I'm a real sunlight junkie," says Angie. Every room has windows on two walls. "On the ground floor," says Carolyn Moss, "we took out walls but kept the window openings where they had been in the original bungalow."

Green elements in the house include geothermal heating, a green roof across the front entrance and details like having the laundry area on the ground floor, "So we can carry washing out to the clothesline in the garden," says Lee.

Walnut, slate, and white elements (paint and cabinetry) feature throughout the house. But the stripped-down look only goes so far. "I'm a big fan of minimalism, but you can't live with pure minimalism," says Lee. The girls' bedrooms are pale pink and green and the master bedroom is a warm grey, "The colour in our old kitchen," says Lee. "I really liked it." 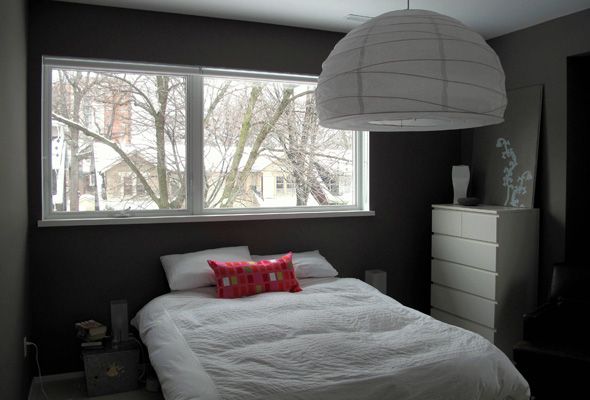 Angie and Lee are looking forward to staying put for a while. Both grew up moving around a lot, "I didn't want to do that to my kids," says Angie. "I love the idea that the girls will go to school from this house, that they'll move out from here." And the two-door garage that started it all? With a bit of insulation, it works perfectly as Lee's workshop.

What do you love most about your home? "The light, and how we use the house differently in winter, and in summer," says Angie. "With the windows and doors open, it's like being outside."

What drives you crazy? "Because of the slate wall, it's really quite noisy," says Angie. "If you're in the basement, you can hear people talking in the upstairs bedrooms." Lee agrees, "Acoustically, it would help to put up curtains, but we don't want curtains." They're still thinking about ways to dampen the sound.

What's your favourite place in your home? Angie & Lee agree: the sofa. "Especially in winter when the fire's on!" says Lee. "It was lovely at Christmas," agrees Angie.

What do you like best about the neighbourhood? "It's a great community," says Angie. "We set up a swing in the front yard; one evening last summer there were twelve kids, six adults...my mum, who was visiting, was a bit overwhelmed!"

What's most surprising about this home? Lee doesn't hesitate: "The efficiency of the geothermal air conditioning--a really good surprise."

If your home were a kind of fruit, what would it be? "I have to admit, Terry warned me about this question," says Lee. "I started thinking about the citrus theme, and I think maybe this house is a clementine, you know, sweet, festive."