Until only a few months ago, a mere block south and west of Bloor and Bay street lay home to the old derelict Charles Street Victoria College mansions. Since 2002, these 2 blocks of abandomnments have been slowly vanishing, making room for new hotel and condominium developments.

Since my alma mater, St. Michael's College, lies just adjacent to the property, I have spent (wasted?) much time salivating over these beautiful, and absolutely impenetrable late 19th century buildings. It was not until fairly recently that I was able to finally gain entry, and at that, in quite unique a manner. 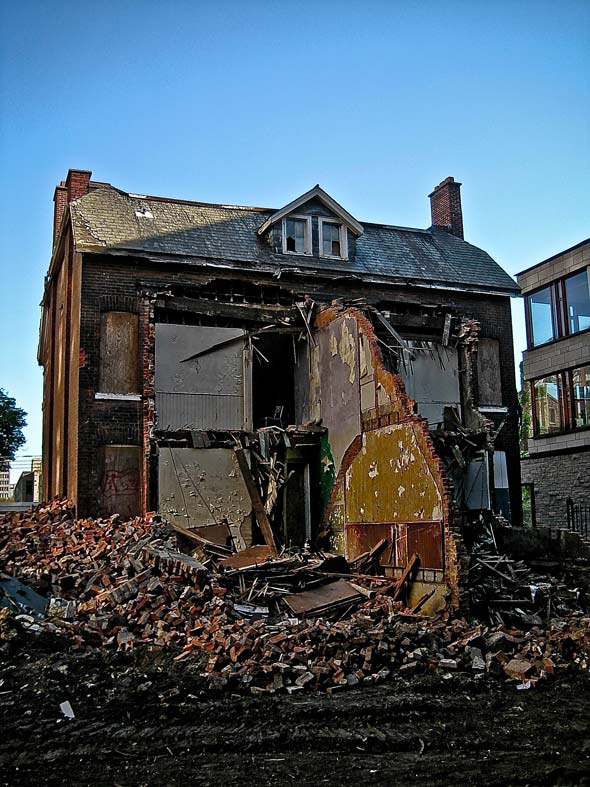 Quite unlike the Richardson Romanesque architecture of Victoria College's main building, these old houses had traces of neo-gothic as well as Victorian work; the college itself was only incorporated into the coalition of colleges comprising UofT (along with Emmanuel College) in 1890, having been originally founded in 1836. 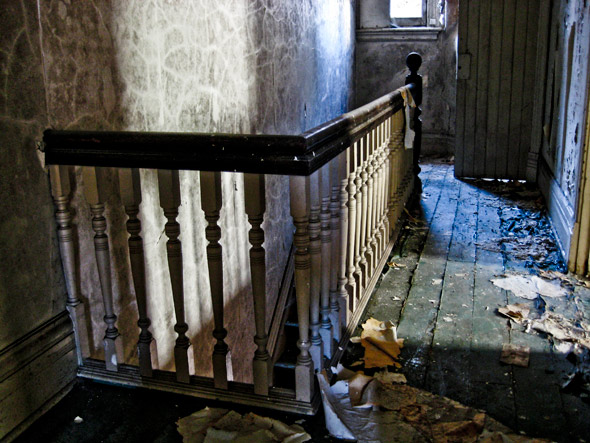 Modern residences were erected West of the abandoned lots, which sat vacant for decades, finally succumbing to their inevitable entropy. Much of their finer detail work (both inside and out) was wood, which did not weather well. 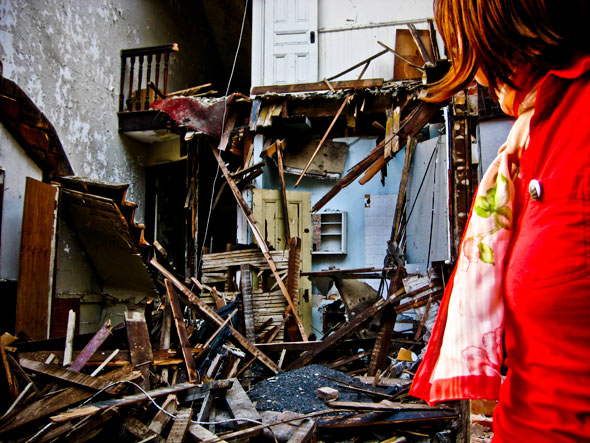 Finally, in May of 1999, an application was made to redesign the proposed hotel plans for the area closer to Bay street (where the beautiful modern faux-art deco building currently sits), so that the facades of the final quartet of historical mansions could be incorporated into what was to be a "low density mixed commercial residential area". The group, Cityplan, overstepped rules set in place by the Ontario Historical Society, and called for site-specific bi-laws to be created for the unique location. 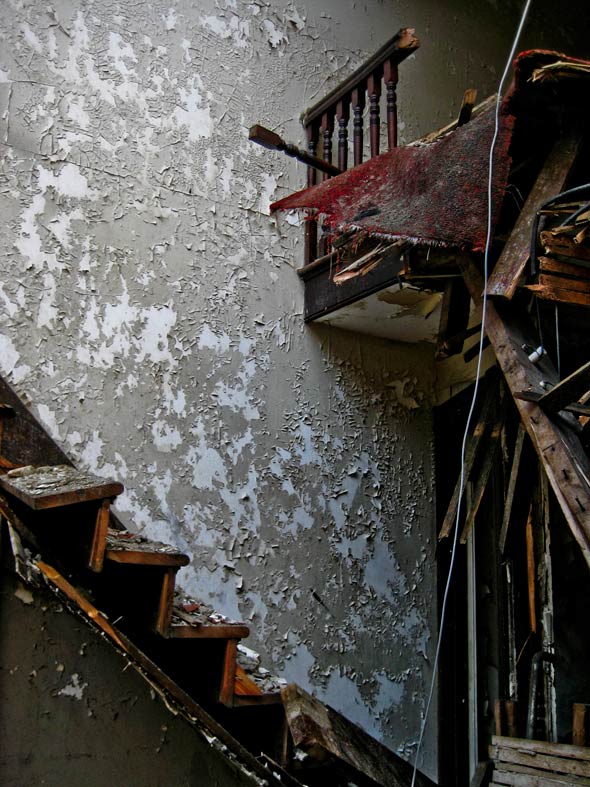 As the battle waged on between the city, Victoria College, and the independent planning groups, the buildings continued to age, until finally one day, the final fencing went up - this would be my last chance to visit this space as it existed in my imagination.

With only the last aging duet remaining, me and my girlfriend walked right around the slightly more modern abandoned buildings just north and around, until we came upon a scene which seemed like something out of a 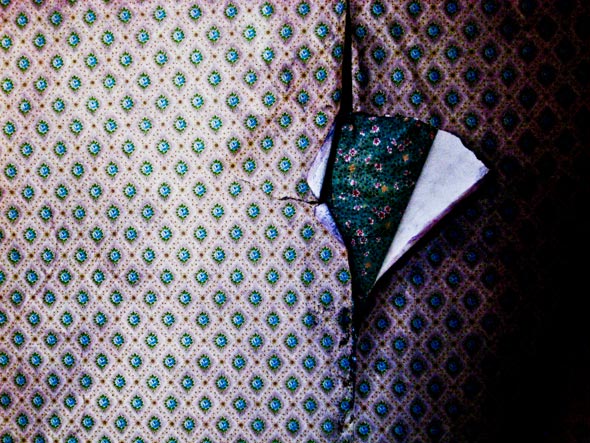 Cronenberg film - the literally ripped-open rear-ends of the place. This looked incredibly dangerous, but I had wanted this for far too long to back-out. As we gingerly picked our way over the rubble and carefully made our way into what appeared to be the remains of a washroom, a young couple on bikes motioned for our attention at a nearby fence. Nervous that they were warning us of something terrible, I crept over to the fence. They wanted to come in with us.

We had a brief chat inside (it turned out the gentleman had gone to school with my girlfriend), but soon the pair had to leave; I recall distinctly the feeling of waving goodbye as he walked down the stairs - a very uneventful-seeming scenario - a goodbye at the end of a visit, but then I turned around. It was as if I was walking inside a post-apocalyptic movie set, the 4th wall open-air. What a sight. 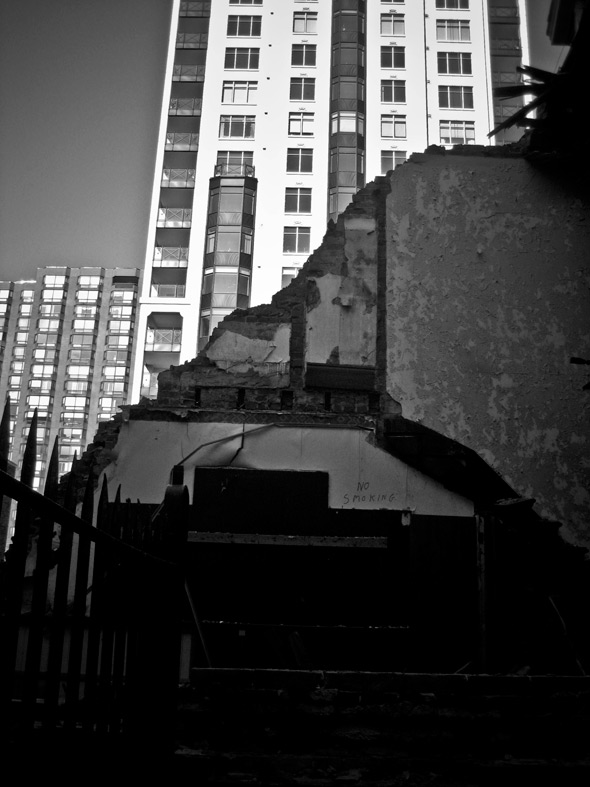 I want to learn more about these buildings, now past, but it seems that more and more often these days, getting historical information on smaller buildings such as these is either pulling teeth, or trampling red tape. I feel it most important to take a look at the macro history of the buildings which we dwell in and near, as it is a part of Toronto's past which an ordinary view tends to overlook. I am not upset that these buildings finally came down, but rather that in decades past they were not revitalized. 'Demolition by neglect' seems to be the word of the day, often times with well-intentions on one side, and bureaucracy on the other.

For a place to be forgotten entails it once having been known; to get to know, in these cases, often involves a tangential etiquette which involves a great deal of side-stepping. From an aesthetic point of view, we must recall the Hegelian logic of synthesis: every new structure contains within itself the seeds of its own negation. We must, therefore, synthesize this truth and fact of the mortality of buildings with the inevitability of innovation. Fusion, therefore, and not forgetfulness.

Below is the rest of the photo set from this recently departed space: