Tiny Miracles is a local initiative that provides care packages to homeless in Toronto. This year The Comedy Bar is holding two night's of comedy (tonight and tomorrow night at 10 p.m.) hosted by Pat Thornton and Sara Hennessey, with all proceeds going to make more care packages.

I asked Comedy Bar co-owner Gary Rideout Jr. about how this all came together.

"It started five or six years ago with just Pat Thornton and his family," said Rideout. We went with a bit of our money and a bunch from Pat's dad and bought socks and sweaters from Honest Ed's. I think gloves as well. They were tied into packages along with a little cash.

"Pat's family drove around on Christmas eve and handed them out to anyone they could find on the downtown streets. It has become a tradition." 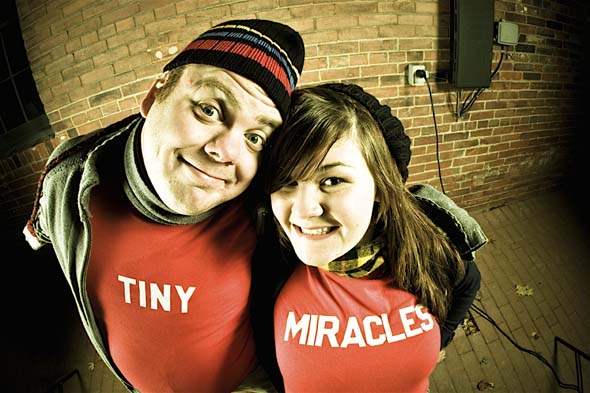 How many packages are made and distributed?

How did the comedy show get involved?

"The show came into it three years ago as a way to increase the number of packages that could be made, to increase the quality of the packages, and to give the public an opportunity to participate in this generous process."

What can you tell me about the comedy shows?

"The shows this year are star-studded. Tonight features Debra Digiovanni from Last Comic Standing, as well as Comedy Award winners The Imponderables. And award-winning stand-up Mark Forward, as well as The Doo-Wops from multiple Just for Laughs tours.

What's the cost of the shows and how much goes towards the cause?

"Shows are Friday and Saturday night at The Comedy Bar (945 Bloor St. W., at Ossington) and start at 10 p.m. Tickets are just $10 and all $10 from each ticket goes directly to the purchase of care package items."

And if you want to stick around a little longer and take in some more laughs, Huge Miracles follows with a midnight show (pwyc) from the comedic duo 10,000 To Flight, with all money going towards Tiny Miracles.