How do people find homes in Toronto? And what defines a home--not just a shelter from our fabulous weather, but a real home? After all the hunting, the internet searches, the relentless house visits, apartment referrals, sleazy landlords, and real estate developers with questionable morals, often the hunt for a home just comes down to serendipity: the right place, the right time, the right kind of luck.

Finding Nadine's dead-end street is an adventure in google-mapping: the house is in Kensington Market, and like everything else in the market, Toronto's urban grid has been morphed by organic forces.

Dwarfed by a nearby tree, the battered street signpost is obscured by a red arrow and a green [[[murmur]]] ear. But tucked behind the vintage clothing shops and the graffiti murals, there's a brief block of dignified rowhouses from the 1880s, sedately watching the madness; bicycles and recycling bins jostle for position outside their narrow front doors and travellers looking for the youth hostel frequently stop, confused, trying to make sense of the irrational house numbers. 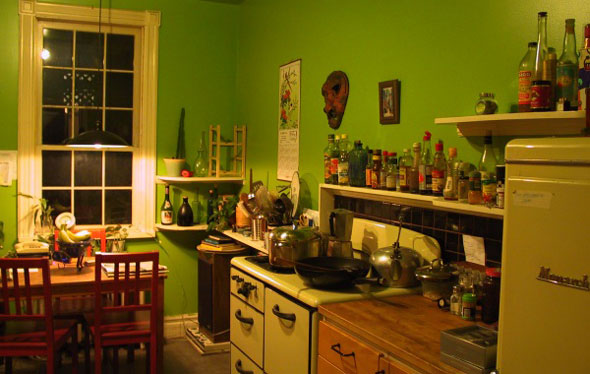 Nadine laughs telling the story of how she and her partner Colin first moved into this hidden street. "Friends invited us to brunch in the summer of 1999. We immediately loved the alleyway and the house, and we mentioned this to our friends, who told us that they were moving out in two months' time."

Talk about timing: "We took the lease and promptly got jobs outside Toronto, so we spent the first two years going back and forth." Fortunately, in 2001, they found themselves living in Toronto again.

The rooms have gradually taken on different jewel tones--green in the kitchen, plum in the dining room, golden orange in one bedroom, burgundy in another. The house has three bedrooms, so they share the space with Megan, a chef; no surprise, with three people who love to cook living in the building, the kitchen has become the heart of the house.

There's something about the place that seems to invite guests: summer backyard drinks tend to develop into block parties, and creative projects spill up and down the stairs. Colin thinks the house might be artistically haunted; a mad poetess was rumoured to live here in the 1920s: "We lose a lot of pencils."

Maybe it's the homey 1950s fridge and stove in the kitchen that encourages connection and creativity, and the plethora of cooks, but somehow this house reminds me of a community hearth. Centuries ago, a village had a shared hearth for baking bread; people could prepare the dough and take it to the community oven to bake it; these days it's more metaphoric, but some homes do inspire entire groups of people.

Beyond the back door, there's even a small yard. This past summer, Megan and Nadine reclaimed the space from the neighbourhood's wild-boar-sized raccoons and grew tomatoes and squash. The garden emphasizes what Nadine loves most about living here. "There's this quiet intimacy of the alley in the midst of the vibrant bustle of the Market." 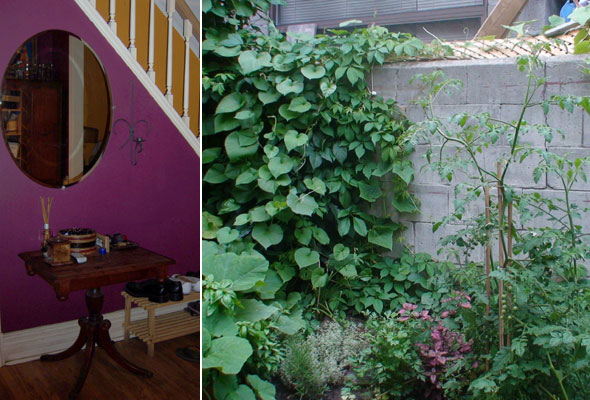 What drives you crazy? Terrible insulation (the pipes freeze at least once every winter), too much dust, the sound of energetic spitting outside.

What's your favourite place in the house? The kitchen and in summer, the little garden - it's a godsend in a neighbourhood without much greenery.

What do you like best about the neighbourhood? The food, the convenience, and the fact that friends enjoy coming to the Market and spending time here, so that our home is a frequent destination for people we love.

What's most surprising about the house? The fact that we've lived here so many years, not because we expected to dislike it, but because we don't usually stay put for so long. But whenever we think about moving, we can't think of anywhere else we'd rather live in Toronto. If we leave this house, it will probably be because we're leaving the city (or because the owners want to move back here!)

If your home were a kind of fruit, what fruit would it be? Because the house is so colourful, I think it would be a bowl of fruit with deep rich tones and flavours: plums, mangoes, cherries, maybe a pomegranate...