I've been listening to 102.1 the Edge since I was a teenager and remain a relatively loyal follower, happy that the station continues to devote some of it's airtime to deserving Canadian talent. But music isn't the only determinant when listening to a station. Radio personalities make a major contribution to a broadcast, and for this reason, at certain times I entirely avoid listening to the Edge.

I feel the exactly the opposite when it comes to Barry Taylor. Monotone and laid-back, his delivery is pretty much the antithesis of the most annoying of DJs. At 30, the Hamilton native has already been on an on-air presenter at the Edge for five years. As the host of regular lister-interactive segments such as "The Barry Interesting Survey," "The 4:20 Thought," and Megaphone man, Barry entertains in the vein of Stephen Wright - with deadpanned coolness. His sometimes awkward, casually opinionated, always friendly delivery is a breath of fresh air. I caught up with Barry Taylor to talk about radio, music and his adventures behind the mic, both on radio and in stand-up comedy.

What music did you listening to growing up? Did you ever listen to CFNY?

Growing up I was more into hip hop music than anything. Like most people in the '90s I liked Pearl Jam and STP, Alice in Chains and Green Day. My friends were into punk music which got me into NOFX. The artists that I listened to most were probably EPMD, Jurrassic 5, Pharcyde, Lost Boyz, Wu Tang, Beastie Boys and Rage Against the Machine. I used to like listening to the live to air from the Kingdom on Friday nights because of the music. I listened to talk radio more than anything.

You worked at the station first as an intern and then with promotions. How did you end up on the air and was that always the goal?

I began interning at the Edge while in college. I got hired as a promotions assistant and a few months later there was an opening for an overnight position. I applied and was shot down right away because my voice was too monotone. I went back the following week with a cheesy demo that had more "energy" and got the position. I wanted to be on the Edge because it seemed to be the radio station that most reflected my personality and allowed for growth.

Other then the fact you're speaking into a microphone, is there anything similar between stand-up comedy and radio hosting?

Yeah stand-up is a lot different than radio. I think that's why I like it so much. There's an immediate reaction that's not there with radio. You're your own censor. It's real freedom.

If I ever bring up the radio to my friends (and when radio is mentioned on this blog) a consistent response is, "Who listens to radio anymore?" Do you still have listeners or is it pretty much the same eight people calling in every night for the Barry Interesting Survey?

Who does listen to the radio? There's so many other options. I'm a big believer in providing content with music, if not, why would anyone listen? Some radio programmers think you just need to play the hits over and over and over and people will listen. I've never understood that. Talk radio will last though. When I take calls there's a pretty diverse group. There's a few people who call in regularly. It's just nice knowing some guys will take time away from Dungeons and Dragons and/or World of Warcaft to participate.

Digital media has put challenging demands on more traditional forms of media, mainly print, radio and television. In regards to radio, I seem to find it's becoming more and more homogeneous, trying to reach out to the widest listener base as possible. Do you find it strange that a station called "The Edge" would play so many songs that can be found on Mix 99.9, 104.5 and 103.5?

Yeah it's weird. The rating system for radio is really flawed and doesn't benefit stations like the Edge. In the next year or so a people meter will be introduced, which will really change things. Ratings data will be a lot more accurate. Right now radio programmers are handcuffed. I still think you need a balance of content and music to really attract an audience. Keep in mind, most stations are owned by corporations now and the more people that listen the more money the station makes. 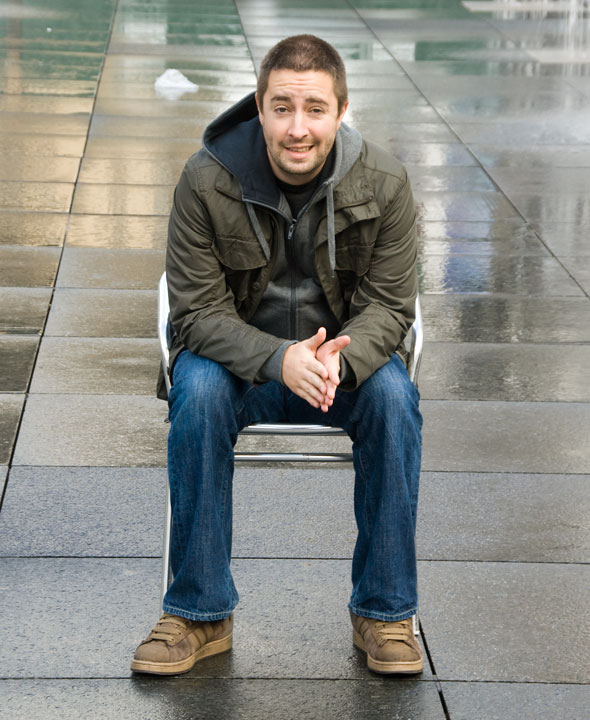 I dug up this quote from a great 2005 post on this site about radio: "I still find it hard to believe that radio stations are that hard-pressed for new material that they have to rotate the same thirty songs constantly throughout the day." CFNY has a long history of playing actual alternative music where new bands could be discovered. You must hear hundreds of new bands every year (through, among others, the Steam Whistle Indie Club). Are there really not enough decent bands that would work on the radio, or is there just not enough room for them on commercial radio?

It's tough. You've got to pick your spots. I'm a big fan of Canadian content regulations though most people aren't. 36% of the music we've got to play has to be Canadian. Without that, bands like the Flatliners, Bedouin Soundclash, Tokyo Police Club and even Alexisonfire wouldn't have gotten on the radio. Not because they didn't deserve it but because they're up against bands promoted by major labels. There's lots of politics. There's more than enough music out there to avoid playing the same songs over and over, but it goes back to the ratings system. On air people have little if any choice in the music that's playing while they work.

I get the feeling from a lot of hardcore music fans that the only good bands left in the world are the one's most people have never heard of. What are you thoughts on that?

It seems like anytime a band gets popular they lose credibility with hardcore music fans. Kings of Leon is that band now. That's true with any subjective material though. I guess people like to be unique; that or they want to be able to say "I knew that before you did". It's a self esteem issue, really. I just drink that stuff away.

What's it like having a store front studio in the heart of the city? Any good stories or characters?

228 Yonge Street. The sequel to that show 227. During one of the first overnight shifts I worked at the studio I had just turned on my mic to talk and as I looked up a drunken homeless man was whipping out his dang and pissing on the see through glass door directly in front of me. I think I probably just said on air what was happening. Not really much else I could do. There are lots of homeless people in downtown Toronto - sometimes they'll just hang out in front and listen to the music, and some even dance. It's like a live rendition of the Michael Jackson Thriller video most of the time.

Where are some of your favorite places in the city to have a drink or listen to music?

Favourite venue is probably Lee's Palace. The first time I saw the Music was at Lee's. Blew my freakin' mind. I saw the Weakerthans there too, which was great. For a night out I really like McVeighs Irish Pub. I do stand-up and/or drink there every couple of weeks. The staff are great and it's comfortable.

Where are your next stand-up gigs?

I've recently joined Facebook. It's 2005 in my world. I use it strictly to post my stand-up gigs. And surf for tail. 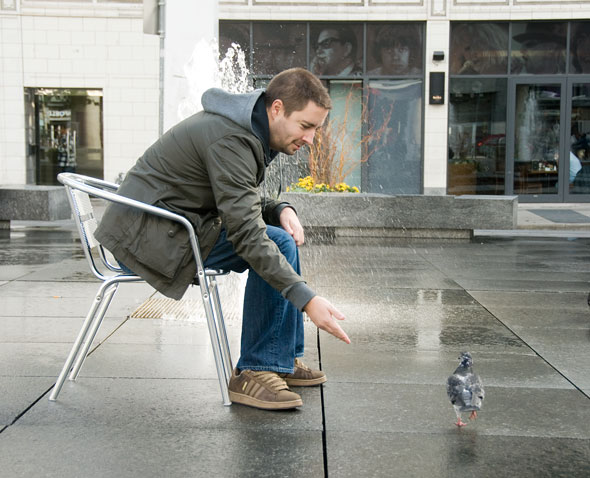 Have pigeons always had an affinity for you?

If Mike Tyson has taught us anything, it's that we all need to respect the pigeon. That's something the Croc Hunter never understood.

You can catch Barry Taylor on air from Monday to Wednesday evenings, and starting at noon on weekends.

Behind the Mic is a series of five blogTO interviews with Toronto radio personalities. Future interviews will include Matt Galloway of Here & Now on CBC radio and Roger Lajoie of The Fan. The first in the series featured Larry Green of Jazz FM.