Newmindspace attempted to create an art installation out of a string of lights higher than the CN Tower last night.

Starting at 7 p.m. they assembled in the field in the centre of University of Toronto's King's College Circle and slowly raised a glowing string of LED lights, buoyed by helium balloons.

I arrived on the scene around 9:30 p.m. after having checked out a show at Sketchfest at The Comedy Bar. The event was supposed to go until 11 p.m., so I hoped to see them reach a substantial height of lights by then.

By 11 p.m. they hoped to have a dazzling string of lights that exceeded 553 metres high, drifting gently in the wind. But at 10:30, the fishing wire unexpectedly snapped, sending a bunch of lights high into the night sky. Potentially higher than the CN Tower. 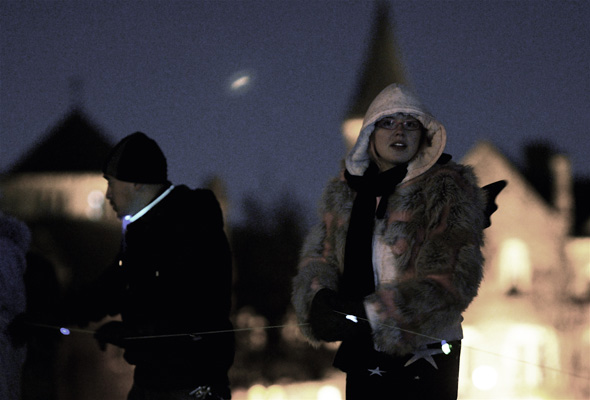 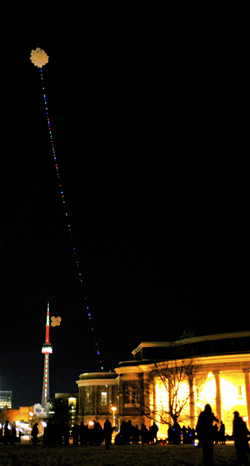 Newmindspace first tried a light installation with their Night Lights in 2006, followed by their String of Diamonds during Nuit Blanche in 2007. This one was on a much colder night.

I was half-expecting to see the string of lights from afar, but it wasn't noticeable until I got near the Kings's College Circle, where they were set up.

I caught a glimpse of the lights about the same time I caught an earful of the rave-like tunes being pumped out of the portable sound system provided by Xofer and Dingokiller.

The tiny batch of hot chocolate was all gone by the time I arrived, but a crowd of about 50 or so revellers were still at hand, despite the chilly -12 degree temperature.

I guess it was too cold for the other 400 "confirmed" attendees on the facebook event page.

Not many were dancing, but rather gathered in small groups, shivering in the cold, looking up occasionally to see the beautiful string of lights in the sky.

Maybe some of them were already higher than the CN Tower. Or staring at the sky that was sparkling like diamonds.

A little kid seemed to be having the most fun, prancing about on his own, enchanted by the shiny objects at hand. 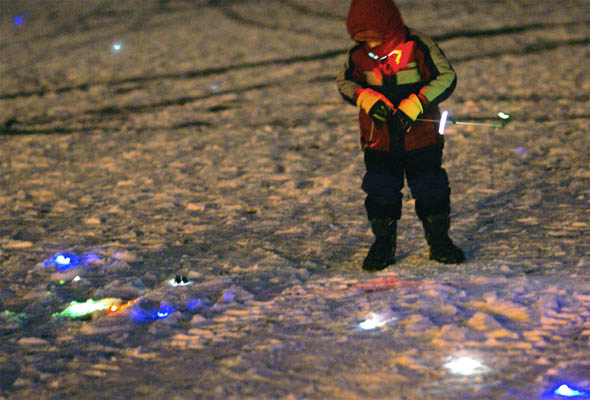 While Newmindspace notified the appropriate aviation authorities who issued an obstruction notice to all aircraft pilots for the balloon launch, I wonder if this stunt created any further problems once the unexpected liftoff occurred.

Still, this was quite a whimsical feat. They never said it had to remain attached to the ground. 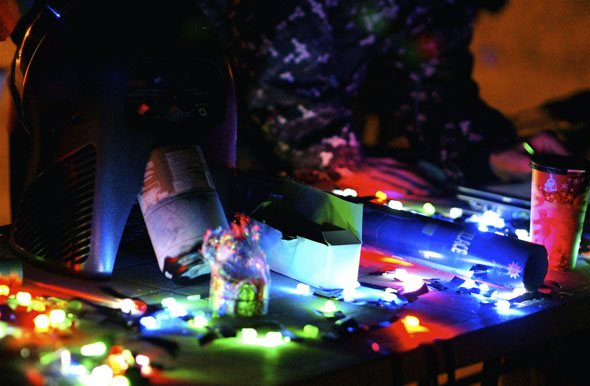 According to newmindspace's event website, most of the recovered LEDs will be used in a December installation.